In its native North Africa, no two blends of this intricate spice mix are the same. Clarissa Hyman explains how to use it for multi-dimensional flavour in sweet or savoury dishes

If any spice mixture can conjure up Scheherazade’s One Thousand and One Nights and a mythical world of flying carpets, it must be ras el hanout. Complex and multi-faceted, this gloriously exotic blend can contain literally dozens of ingredients, with the versions from Fez, Morocco, considered to be the most intricate. The minimum number of spices in the mix is usually ten but blends of 30 or 40 in varying quantities are not unknown, and some mixes of up to 100 have been recorded.

In her classic book Traditional Moroccan Cooking, originally published in 1958, Madame Guinaudeau lyrically describes the aroma as one in which ‘the nomad warrior has combined all the scents of the countries he has passed through’. Sigh, swoon and pass the Turkish Delight.

Although largely of Moroccan origin, the spice blend is also found elsewhere in the North African countries collectively known as the Maghreb, especially Tunisia and Algeria. It is literally translated as ‘head of the shop’, a reference perhaps to the way the spice-shop owner will mix and pound a blend of his very best spices to his own taste, tailored to the spending power of his customers and the use to which the mixture will be put.

There is no single recipe, nor is there a definitive composition: blends vary not just from region to region but from one bazaar to another, one seller to the next. In the Maghreb it is always sold whole and ground as required in front of the purchaser.

As Nargisse Benkabbou, author of Casablanca: My Moroccan Food, has written, ras el hanout shows how Morocco’s historical and cultural background has influenced Moroccan cuisine, as many of the spices used in the blend do not originally come from Morocco. It is a striking case of the whole being so very much greater than the sum of its parts.

Common to all the many variations are white, green or black cardamom, nutmeg, mace, cinnamon, allspice, aniseed, peppercorns, ginger and cloves. Typically, other ingredients might include chili, turmeric, coriander, rose buds or petals, nigella, paprika, cumin and saffron as well as lesser-known spices such as lavender blossom, orris root, grains of paradise (melegueta pepper) and cubeb, the unripe fruit of a plant belonging to the pepper family. Garlic, nuts or dry herbs are not usually included as they tend to be added to dishes during the cooking process, although some commercial preparations may contain them.

You could describe it as the perfect spice mix with no salt, no sugar, just all flavour. Such spice mixes are considered as warming, especially in colder climates and during winter when they are said to heat the blood. According to Mme Guinaudeau, old men, when feeling chilly in the winter, take it in order to restore virility.

Ras el hanout is used in a wide variety of dishes, especially multi-dimensional comfort stews such as lamb tagine with preserved lemons and olives, or tagines of meat, quince and honey or of chicken and dates. It is often sprinkled over rice and couscous dishes such as sweet and spicy couscous tfaya, made with caramelised onions and raisins. It can also give a fabulous edge to a Moroccan spiced goat stew and is used to season pastilla, a palatial pigeon and almond pie (now commonly made with chicken). Due to its liberal use in mrouzia, a lamb, raisins, almonds, saffron and honey dish prepared in the days following Eid, it is also sometimes called mrouzia spice. Tunisian recipes, which often include rose petals as well as ras el hanout, tend to be milder than the more pungent dishes of Morocco.

For a speedy marinade, mix with a little oil and use to marinate or rub onto chicken, lamb or vegetables before grilling. Or sprinkle on omelettes or scrambled eggs before serving. You can even add it to your favourite blend of ground coffee.

Make your own mix with this shortcut: lightly toast whole cumin, coriander and cardamon seeds and grind with cinnamon, ginger, peppercorns and turmeric until crushed to a fine powder. This makes a very acceptable mix that can be varied according to personal taste, although of course it’s easy to buy a ready ground version since these are widely available. Be aware that quality can vary and avoid buying large packets as the scent soon fades and unless you use it day in, day out, it will lose much of its flavour in a few months. Store the spice mix in an airtight jar once opened.

A rather splendid onion purée can be made by slowly cooking sliced onions, salt and ras el hanout in a covered pan for 30 minutes, then adding honey and sherry vinegar and simmering uncovered for another half hour, stirring frequently.

The spice mix is pungent and pervasive, so even a small amount will impart a potent taste to dishes. The best mixes have, according to Andy Harris in A Month in Marrakesh, an ethereal and lingering sensual flavour. He gives a recipe for vegetable briouat, made with warkha or filo pastry stuffed with roasted Mediterranean vegetables seasoned with ras el hanout and lemon juice and served with a harissa yoghurt dip. Another suggestion is to season roast tomatoes with ras el hanout along with garlic and capers to include in a tuna Niçoise. Combined with rose water, it adds panache to a dish of chicken with prunes that is given a sweet-sour twist with honey and lemon juice.

Other popular ways of infusing dishes with a heady accent include adding it to minced lamb kebabs along with finely chopped green olives, parsley and preserved lemon. Or include it in a deliciously rustic dish of meltingly tender, slow-baked aubergine with caramelised garlic, shallots and tomatoes.

You’ll find the smell in the kitchen quite amazing.

In Arabic, ras el hanout is called ‘love potion’ and traditionally it contains a supposed aphrodisiac, such as mountain ash berries, monk’s pepper or cantharides (shiny green Spanish fly) or even dried belladonna berries (although, reassuringly, according to Mme Guinaudeau, only a very few are needed). These outré ingredients add nothing in terms of flavour, but are presumably included for other reasons. Perhaps best not tried at home.

It is also used in a sweetmeat called el majoun made with almonds, honey, butter and hashish. You have been warned. 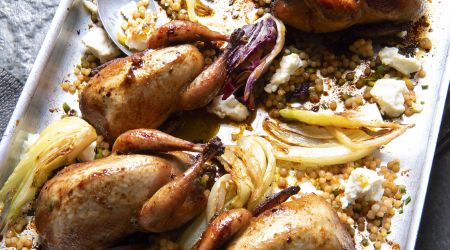 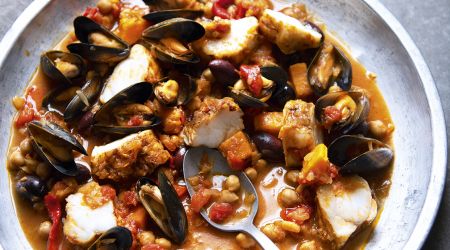 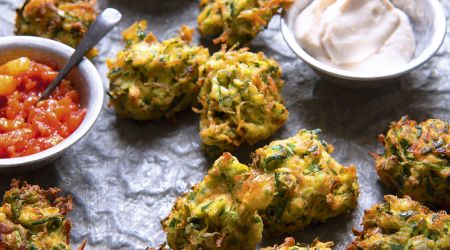 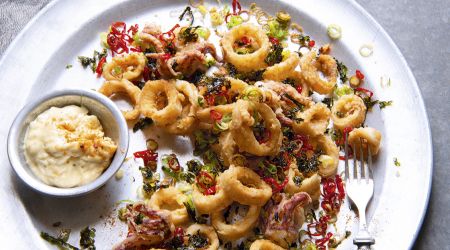