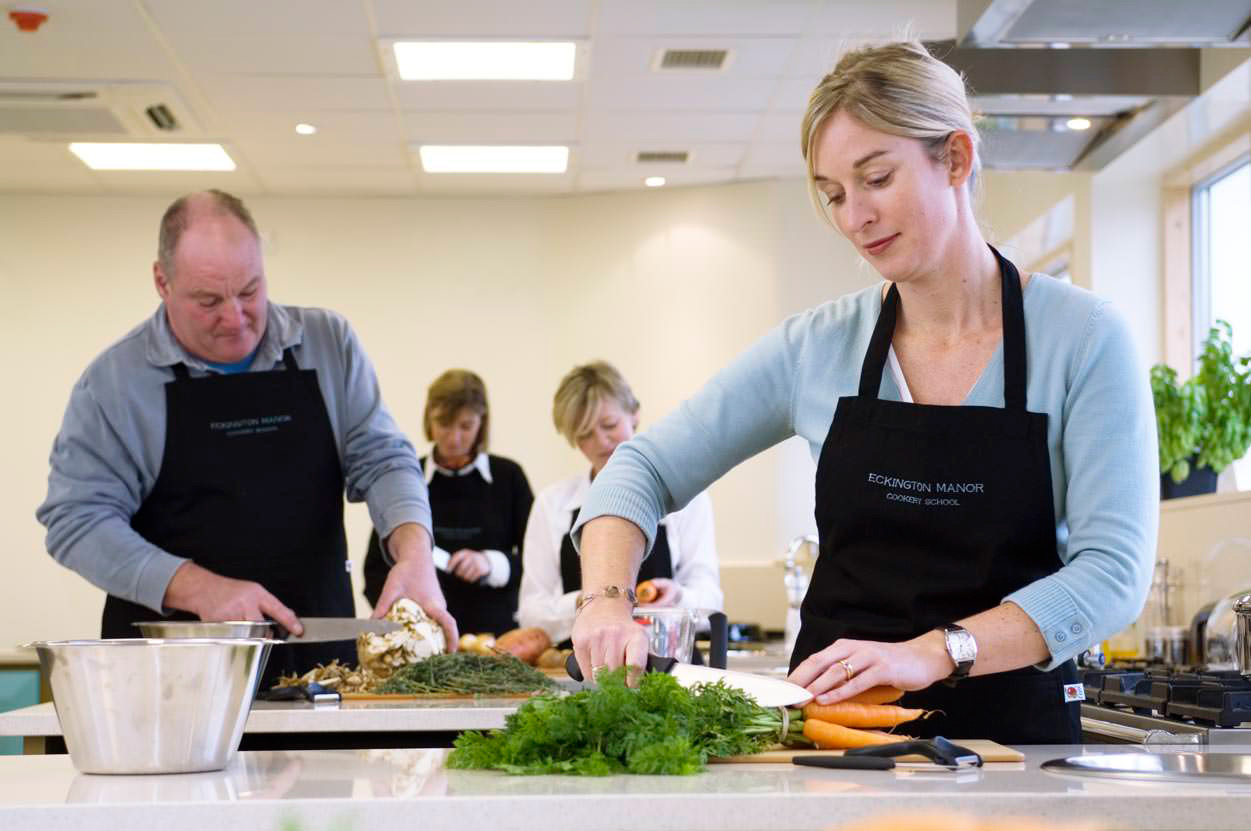 On the western fringes of the Vale of Evesham lies Eckington, a sleepy village nestling the River Avon, brought to prominence by the ambition and determination of Judy Gardner. Having made her fortune by founding, growing and finally selling Garners Food (a pickles and chutneys business started from her own kitchen), Gardner bought the neglected Manor Farm nine years ago. As well as reviving the 105-hectare farmland, the site has been renovated to house imaginative, boutique-style accommodation (15 rooms from £130, some converted from the stables and milking parlour) and, more recently, a restaurant. At the heart of the venue lies the impressive cookery school with which Gardner launched the venue in 2006. The layout is strikingly bold, with a dozen smart work tables set up for pairs to share and well appointed in terms of equipment, notably via six Agas. The tutor works on a larger station, overseen by a camera and two large screens.

The Agas are the subject of monthly specialist courses, while baking is also a keen focus. Other than that, the schedule is pretty varied, incorporating anything from Thai to Indian cooking. We signed up for a half-day Italian class (courses vary in length from two hours to three days) run by Mark Devonshire, who spent 15 years at Rick Stein’s seafood school in his native Cornwall – a grounding which came to the fore here. His approach is informal and gently encouraging. Devonshire opened by schooling us in making bread Italian style – in this instance focaccia, though easily transformed into ciabatta. The intricacies of the consistency, kneading and timing were all explained, though the real fun came in custom-making each slab via our own choice of fillings – be it rosemary (grown on the property – there’s also a ‘cooking from the herb garden’ course), parmesan, olive, garlic or sundried tomato.

Thereafter it was onto the main dish of the day, sea bream, which we were shown how to prepare whole, including the finning and gutting (though sadly not filleting) and to cook with a fennelbased filling that went down very well with a glass or two of wine for lunch. In between came a quick demonstration of how to make nettle-infused pasta and a speedy recipe for pesto from Gardner herself. One gets the impression she’s a woman who doesn’t like to be away from the action for too long. £99. GW.