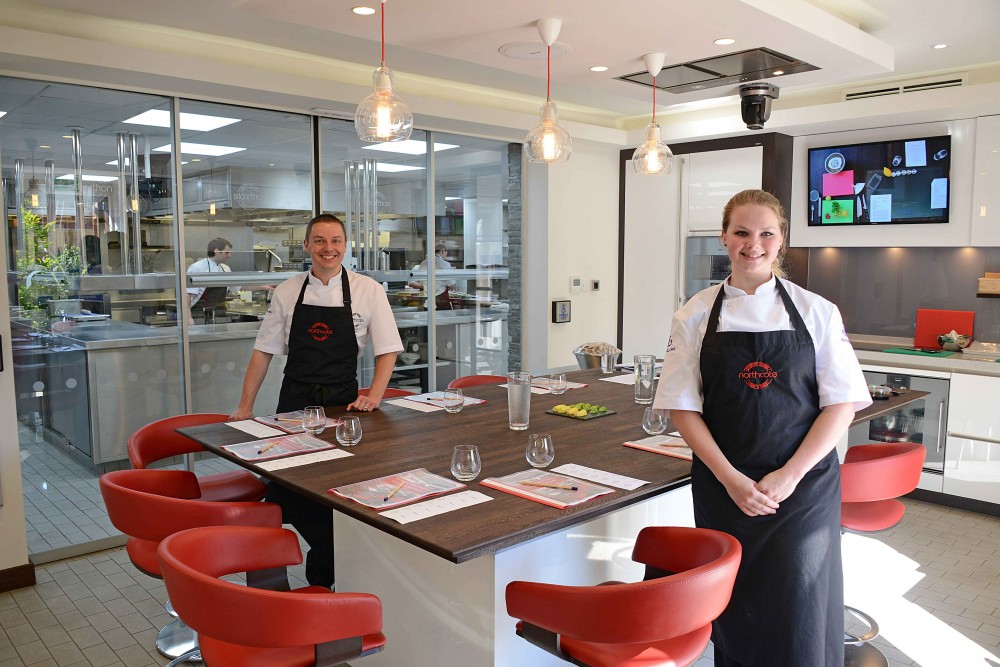 It’s a busy lunchtime service at Northcote, when chef patron Nigel Haworth – who has just finished cooking for the Queen – enters through the sliding glass doors of the Michelin-starred restaurant and country house hotel’s brand new cookery school. Our group of eight students is gathered around the Chef’s Table, a high-spec space that overlooks the bustling kitchen.

Northcote, at Langho near Blackburn, has just undergone an impressive renovation, but the views over the bucolic Ribble Valley remain the same. The restaurant is particularly known for its Obsession event each January that invites chefs such as Paul Ainsworth and Eric Chavot to create menus. But the school reflects Nigel and head chef Lisa Allen’s passion for Lancashire produce.

Enthusiastic head tutor Michael Vanheste is leading today’s one- day, intermediate Northcote at Home course, so after a quick chat with Nigel we get to work on a menu that includes, among others, home-cured treacle salmon, lamb in puff pastry and an apple crumble soufflé. A TV link keeps us up-to-date with service but soon we are just as engaged. Picking up the portioned out ingredients, we get cracking on the salmon, scoring the skin, rubbing salt all over to cure. It’s fun bashing the chilli, lemongrass, coriander, lime and ginger to make a fine and zesty coating. But first we pour a treacle-soy dressing over the fish, while Nigel entertains us with a joke about treacle ‘miners’ in the north. Setting the salmon aside in cling film, we watch Michael make a hummus dip spiced with chilli and a little more treacle – using local black peas, which add a surprising new depth of flavour. Removing the silverskin from the lamb is a skill in itself, as is searing the meat on the clever Gaggenau induction hobs. We artfully plaster over a stuffing of spinach, nutmeg and chestnut mushrooms then wrap in Parma ham, covering with puff pastry latticed by roller and tidied up by hand.

All the dishes we are making today are packaged as we go, to take home, and sauces and garnishes are also made ready to be assembled for that special soirée. There’s plenty of eating though, as we go along, and when we sit down to a two-course lunch with wine that’s a pure delight. As for the soufflés, they are devoured moments after their hats are out the oven, with a scoop of ice cream.

Macarons, bread, Thai, canapés – all classes here are delivered with patience and expertise from Nigel, Lisa and Michael. You may not be earning a Michelin star for your own food, but you certainly will get a taste for the ‘obsession’. JW. £185