Once a darling of Victorian dinner parties, these tantalising tips are among our most prized veg, thanks to their subtle class and colour – and are delicious dipped, says Clarissa Hyman with recipes by Linda Tubby

On a visit to the Victoria and Albert Museum in London, I learnt an astonishing fact. In the 19th century, asparagus was hugely popular and, as a result, had more specialised utensils devoted to its serving and consumption than any other vegetable. You couldn’t move in a middle-class Victorian pantry without falling over the array of decorative trays, drainers, stands, dishes and plates with wells for sauce that every aspiring hostess doubtless had to possess.

One of the prettiest exhibits was a Chelsea porcelain tureen and cover in the form of a bundle of asparagus with purple and green tips and one stalk bent up to form the handle. Also on view were ornately engraved silver or electroplated servers that operate like scissors or have sprung U-shapes similar to sugar tongs. The best were made with flat, broad blades for lifting and holding several delicate spears without them snapping.

Food-fashionistas would probably have consulted Mrs Beeton, who gave various recipes, including boiled asparagus on toast dipped in the water in which the asparagus is cooked; asparagus pudding, ‘a delicious dish to be served with the second course’; and asparagus peas, to be served as an ‘entremet’. The correct way to consume a stalk was among the day’s important issues of etiquette, meriting a section in Manners and Tone of Good Society (circa 1880), which detailed how some silver servers were used as individual place cutlery, so that the diner could lift the spear to the mouth and delicately nibble the end.
Asparagus adoration may have reached its zenith in Britain around this time, but its popularity is back at a high today, with the vegetable firmly established as a spring staple. It still surprises – and delights – me how in a supermarket-driven world of blurred seasons, the appearance of English asparagus remains a (small but delicious) cause for celebration, rather like hearing the first cuckoo of spring. It’s the cue for restaurant kitchens across the land to dust off the asparagus kettle and chalk up the first blackboard ‘special’.

Its origins, though, go far further than even Victorian times. Bundles of asparagus were offered as tributes to their gods by the ancient Egyptians, while both the Greeks and Romans picked stalks from the hillsides where they still grow wild today. Apicius gives a rather overpowering recipe in which the asparagus is puréed with egg, seasoned with garum and aromatics. Around 1300, Argenteuil just outside Paris became known for cultivated asparagus, although urban sprawl has now destroyed the famous fields. Several centuries later, the first colonists of North America took asparagus crowns with them. In Britain, the Vale of Evesham is synonymous with quality, although much commercial cultivation now takes place in the east of England.

The diuretic qualities of asparagus are thanks to a substance called asparagine, discovered in the early 19th century, although Renaissance writer Platina noted, ‘Asparagus alleviates inflammations of the stomach, excites lechery, is good for the sight and pain in the eyes, soothes the stomach gently, and is good for pain in the kidneys, stomach and intestines.’ The alleged propensity for asparagus to excite lechery may derive from its phallic shape or, more likely, the high content of phosphorus, vitamin A and oxalic acid.

Asparagus plants consist of an underground ‘crown’ of roots and buds; in spring, the latter grow upwards and pierce the soil’s surface. If these ‘spears’ are allowed to grow, they will produce a stem bearing fine, feathery leaves, the asparagus fern beloved of florists. They like a light soil and their own dedicated space. Resist cutting for the first three years to strengthen the crowns, and finally harvest by hand with a special long knife. Cutting may continue for several weeks throughout May and June, but there is no second crop. A bed, though, may be productive for up to 20 years.

Although the first pencil-thin pickings or ‘thinings’, known as sprue, are prized in their own right, they are usually sold loose and destined for stir-fries and soups. The French and Germans prefer canned or fresh, fat, white-blanched spears, their colour and shape achieved by ‘forcing’ (earthing up so they grow in the dark). Exquisitely flavoured green asparagus, though, remains the UK choice.

Once cut, asparagus starts to deteriorate as its sugars convert to starch, so ideally it should be eaten as soon after picking as possible. Not only can home growers feast on asparagus with an intensity of earthy sweetness, they can sample varieties such as Stewarts Purple with its lovely purple tips.

Brief steaming or boiling remains the best way to cook asparagus, although grilled or roasted spears with shaved parmesan have become fashionable. It may depend on thickness: according to food writer Christine McFadden, steaming brings out the colour and flavour of slender spears, but they can shrivel when grilled. On the other hand, fat spears can stand up to the grill, but become watery when steamed.
You don’t need a special kettle to raise the tips above the boiling water: it is a practice derived from the days when all vegetables were routinely boiled to blazes. The trick is to break off the woody ends of the spears at their natural snapping point (keep the ends for stock), and only peel the spears if they are particularly thick or old.

Use the blanched tips in a risotto, quiche or frittata, or keep it simple with a dip of melted butter, lemony vinaigrette or hollandaise. Hugh Fearnley-Whittingstall likes to eat them with a soft-boiled egg, instead of bread soldiers.

And ideally, of course, serve this aristocrat of the plant world in a charming Victorian dish: you’ll have to find your own, though. I doubt if the ones in the V&A are for sale. 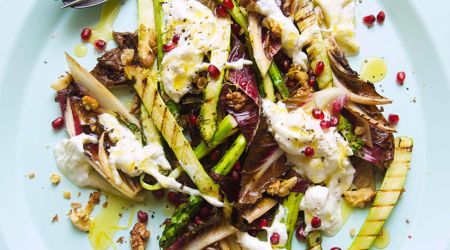 Chargrilled asparagus and radicchio with burrata, walnuts and pomegranate 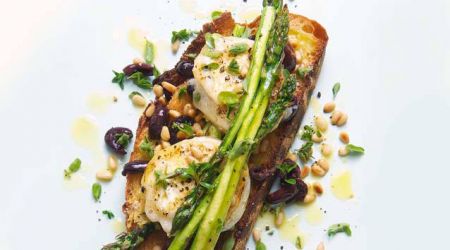 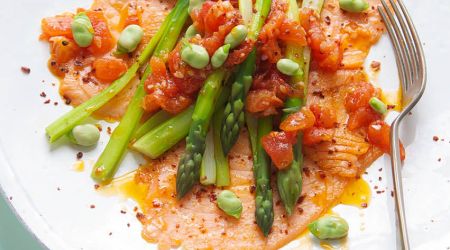