A relatively undiscovered vegetable for decades, these crunchy white leaves are bursting with fresh, zingy flavour. Helen Hokin urges us to see the light with recipes by Linda Tubby

The Great English Chicory Challenge is open to any cook, amateur or pro, who fancies their chances at devising a recipe using the zestiest, crunchiest leaves winter has to offer. Chicory tarts with goats’ cheese and thyme clinched Hampshire-based amateur cook Susie Carter the top prize of £5,000 and a book of recipes dedicated to chicory has been published on the back of the competition. Hopefully, this will go some way to raising chicory’s little-known profile because, right now, the average Brit’s winter shopping basket isn’t exactly brimming with the stuff. It’s puzzling. How come a vegetable that’s so easy to grow, unique in flavour, offers freshness and bite, and is a tower of nutritional might barely registers on the nation’s radar?

Not so, however, in The Netherlands, France and Belgium where chicory is decidedly chic. Ubiquitous ‘witloof’ (white leaf), pops up in home cooking and restaurants across mainland Europe. In Belgium they have a penchant for baking it in creamy béchamel sauce, the French like it with Roquefort, while the Dutch grow and export 21,000 tonnes of the leaves every year. Back home, research has uncovered just one commercial producer in the UK. Lincolnshire-based Jack Buck Growers claim the title, although we will happily stand corrected. At least if chicory was new it might explain why we’re slow on the uptake but it’s hardly the case – the ancients were already gathering it wild as a salad and vegetable and knew of its medicinal properties millennia ago.

In the Middle Ages, monks ground up its roots to treat a number of ailments and the Germans cultivated it during the 16th century, but then it mysteriously fell off the culinary radar. Chicory remained absent from our kitchens until the mid-1900s when it was accidentally rediscovered by a certain Monsieur Brazier of Belgium. While growing chicory roots for a coffee substitute he discovered white leaves sprouting from the woody taproot. Liking what he tasted he began to cultivate the closely packed sheath of leaves – the chicón – in earnest and in secret. Throughout his life he kept the clandestine cultivation process close to his chest, cashing in on his chance find to the bemusement of agriculturalists around him. After his death, it looked as if the secret had gone with him to the grave until his widow, who’d known it all along, promptly shared it with the Brussels Botanical Gardens.

Apparently his success was due to growing roots buried deep under tightly packed sawdust, holding the developing shoot in its neat cigar-shape and ensuring it retained its white hue by keeping it in complete darkness. As soon as it peeked above ground it was hurriedly picked and packed to keep it from light and preserve its colour – the key to avoiding bitterness. The underground activity, kept underground for so long, turned out to be supremely easy to emulate, sprouting a succession of chicory farms. Today, chicory is produced when 20-week-old roots, grown naturally in fields, are harvested and transported to dark, climate-controlled rooms for forcing.

Not long before the ‘rediscovery’ of chicory as a salad leaf and vegetable in Belgium the hot new drink of choice was coffee, though its extortionate price tag deprived many of their daily fix. In the race to find a substitute, entrepreneurs tried grains, dried fruits, even acorns in the hope of securing a successful stand-in. Dandelion, like chicory, belongs to the Chicorium family and worked quite well, but it was the chicory root with its bite and slightly bitter taste that proved coffee’s closest match. Nineteenth-century farmers planted this lucrative and easy-to-grow crop, which seemed to thrive where nothing else would grow, and the sturdy Magdeburg variety was the root of choice. For decades, fields across Europe were awash with delicate blue chicory flowers.

With a ready supply of cheap coffee substitute, coffee manufacturing fell open to abuse – producers took to adding more than 50 per cent of the cheap staple to the expensive coffee mix. By the early 19th century, food police in Britain had banned adding chicory to coffee but punters, loving its distinctive flavour and cut price, protested until the authorities relented and allowed it back into their daily brew. French traders brought dried chicory roots to Louisiana when it became a French crown colony in 1731. It went down a storm and when Napoleon sold Louisiana to the United States, the taste for a cup of chicory remained. All over Europe we guzzled gallons of the stuff, all the way to the 1960s and the dawn of instant coffee.

When buying chicory, make sure its individual chicóns are tightly wrapped in blue paper; they shouldn’t have seen the light of day. Inside they should be firm and white, and therefore devoid of any bitterness. Pass up green and especially brown-leaved ones, and revive wilted chicory by standing it briefly in a glass of water.

Store in a cool dark place, preferably the salad drawer of the refrigerator where it should keep for about five days. Avoid leaving it out in the open since light causes the leaves to turn green and austere tasting; if you find any green leaves on the head, it’s best to remove them. Slicing away the bottom part of the heart (approximately ½cm) also helps lessen the bitter taste and removing the pith (the hard white core that is an extension of the chicory root) will eradicate most traces of bitterness. This wonderfully versatile leaf tastes as good cooked as it does raw; simply remove a few of the outer leaves and trim away the bottom part of the head. If the heart is large, it can also be removed. Adding a few drops of lemon juice to the cooking water should ensure the leaves stay white.

Chicory adds fresh zest to winter salads but because its leaves are sometimes bitter, citrus fruits are a natural foil, in particular pink grapefruit and orange. Spoon savoury fillings into its pretty boat-shaped leaves: blue cheese, fennel, cream, garlic, bacon, ham and pheasant all work a treat. Poach it, braise it, stir-fry or bake it, then sit down and enjoy it ­­– you’ll wonder what took you so long to discover it. 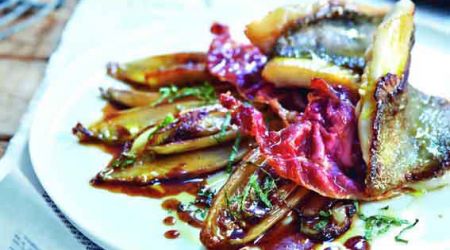