Essential the world over, these cloves are the cornerstone of cooking. Clarissa Hyman sizes up this pungent multi-layered vegetable. Recipes by Linda Tubby

It’s a well-known fact that vampires cannot escape from their graves if their mouths are stuffed with garlic and the cloves
scattered around their coffins. You’d be pretty unlucky to cross one, though.

Such beliefs were popularised in Bram Stoker’s gothic novel Dracula and the myth extends yet further. No-one, however, can offer a definitive explanation as to the connection. One theory is that garlic may act as a repellent against malaria-spreading mosquitos (both suck blood) and garlic makes them less likely to bite.

Garlic (Allium sativum) was introduced to the UK by the Romans, although it is thought to have originated in the desert of the Kirghiz people of Central Asia. It was popular throughout the medieval and Elizabethan periods and records show that Glastonbury Abbey was supplied with 80,000 bulbs of garlic a year. It seems a huge amount but bulbs were smaller then. Although it still works out as about a quarter of a bulb each day for each person.

Over the centuries, mutterings gradually increased about its excessive pungency and unsuitability for use in polite society. In 1594, Thomas Nashe observed in his wonderfully titled The Unfortunate Traveller that ‘Garlicke makes a man winke, drinke and stinke’. The winking bit may have encouraged a few lechers but gardener and diarist John Evelyn was stern on the subject. ‘We absolutely forbid it entrance into our salleting [salad], by reason of its intolerable rankness.’ It was not just a question of offending the ladies, it was, he said, associated with the poor and should only be kept for northern rustics.

By Victorian times, Mrs Beeton was in no doubt: ‘The smell of this plant is considered offensive, and it is the most acrimonious in its taste of the whole of the alliaceous tribe.’ Certainly, garlic is the strongest-tasting and strongest-smelling member of the onion family, but its fearsome reputation is far eclipsed by its actual qualities.

In the kitchen its uses are many and varied, from garlic croutons to aioli, garlic butter to the remarkably subtle chicken with 40 cloves of garlic. But garlic has also long been seen as a medicinal remedy with antiseptic and stimulant properties. Garlic
broth is said to be a cure or prevention for colds and coughs, and at one time was thought of as a remedy for the plague. Recent, more scientific, research points to its antibacterial, antifungal and antithrombotic qualities. And far from being a passion-killer, garlic also has a reputation as an aphrodisiac.

The bulb is made up of small cloves that give off little smell when whole. When crushed, however, the strong flavour is released from the essential oil. There are dozens of varieties, differing in size, pungency and skin colour. Most garlic sold in the UK today comes from Italy, Spain, France and China although the Isle of Wight has built a niche market for its fine produce.

The Garlic Farm claims its many varieties of garlic are particularly juicy and long- lasting because the bulb grows well in the dry, local ‘terroir’ of the island. It also produces all things garlicky from Black Garlic Beer (questionable) to Garlic Mayonnaise (delicious).

Varieties differ greatly with gradations in skin colour from ivory white to pink and purple, size of bulb and cloves, as well as pungency. French variety Rose de Lautrec is considered the finest of all. For home growers, the choice includes unusual heritage varieties such as Red Duke with beautiful red cloves and the violet-coloured bulbs of Mikulov. Elephant garlic cloves are irresistibly sweet, mild and creamy, and as super-sized as they sound.

Crushing garlic requires a knack. The easiest way is to sprinkle the cloves with a little salt, then flatten and smash with a kitchen knife. They can also be crushed in a pestle and mortar. The garlic press is a contentious piece of kit: some cooks find it crude, difficult to clean and even claim it leaves a metallic taint.

Sometimes garlic is fried to flavour the oil and the cloves then thrown out once they brown and become bitter. Old garlic usually has a green shoot that can be seen growing through the pointed end. If this is the case, cut the clove in half and remove the shoot which is strong and bitter.

The quantity to use in cooking is highly personal: generally, if the flavouring is to be light, just rub the food or inside of a bowl with a peeled clove. Escoffier gave an excellent tip: when scrambling eggs, beat them with a clove of garlic speared on the end of your fork for a most delicate and appetizing flavour.

Fresh green (or ‘wet’) garlic is the immature plant, and an unusual pleasure in May. It is milder, sweeter and less pungent than dried garlic and can be cooked as a vegetable. The skin is so tender and moist that only the very outer layer need be removed.

Wild garlic plants have been eaten as a vegetable since antiquity and are a little like spring onions although milder. The name embraces a number of plants in the genus including ramsons which are sometimes known as bear’s garlic (A. ursinum). They have scented white blossoms and bright green leaves that can carpet a damp wood and riverbank in April and May. One sweet-tasting species in North America is cooked whole like leeks or pickled to make a relish.

I must, however, object to the trend for smoked garlic. Surely, this magical little bulb needs no further flavour? Count Dracula would turn in his grave. 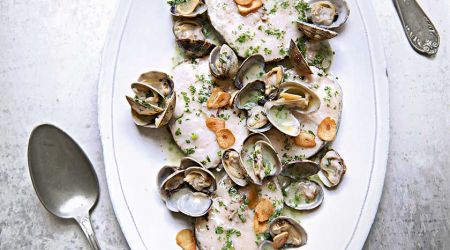 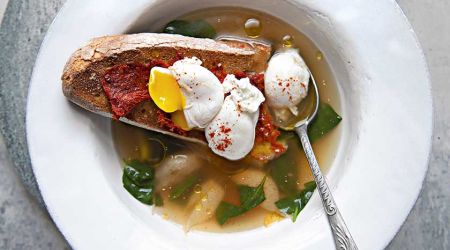 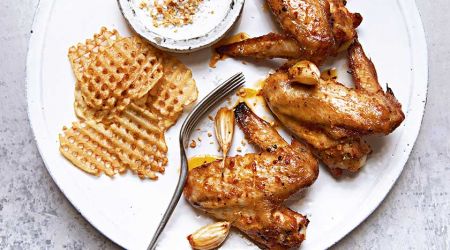 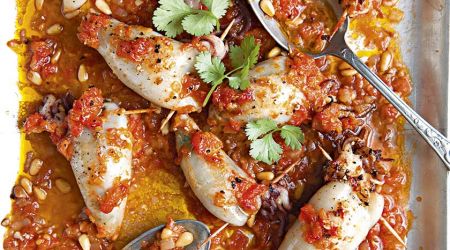