Mild, sweet and sustainable, the underrated fish that’s big in Spain deserves a place on your table, says Clarissa Hyman

Hake always reminds me of a British pop star who tops the charts in Japan or Azerbaijan but remains relatively unknown in their home country. It’s a shame because it is truly a fine white fish and one the Spanish and Portuguese go mad for. They snap up tonnes of our finest hake, for which they are willing to pay much higher prices than they command on the domestic market.

The mild, flaky flesh cooks to a moist and meaty texture with tender flakes that are deliciously sweet and clean-tasting. Line-caught or fish caught by gillnet arebest, as rawled fish can be flabby and difficult to fillet without falling apart.

Hake is long and sleek with a touch of the eel about it. It has a dull blueish or slate grey back and a large head with a rather menacing mouth protected by sharp teeth that giving it a fearsome look. Rick Stein once recalled a catering college textbook that described the hake as having a ‘pleased expression’, adding: ‘it does indeed seem to flash its fine set of pin teeth with satisfaction.’

They swim in deep, temperate waters, and live in shoals over sand or mud and gravel. They rise to mid-level waters to feed and come to shallower depths at night. Male hake don’t reach maturity until they are around 40cm long, while females reach the larger size of 50cm.

There are 13 species in the hake or Merluccius family but only one, the European hake (Merlucus merluccius), is found in waters close to home. Silver hake is the best-known relative and is caught off the coast of New England in the north-west Atlantic. Other species found frozen on the British wholesale market may originate in Chile, Argentina, South Africa and Namibia. Cape hake is, in fact, a good sustainable fish to eat and the fishery was certified as responsible by the Marine Stewardship Council (MSC) in 2004 but be sure to check the label.

There are two main fishing grounds for European hake – a northern and a southern one. The former has recovered from depleted levels brought about by over- fishing, unsustainable fishing methods, ecological problems, juvenile catches and non-registered catches.

Happily, good management and controls now mean there is a lot more hake off the British and Irish coasts. The Cornish hake gillnet fishery was also certified by the MSC in June 2015. However, southern stocks, especially from the Bay of Biscay in the north-east Atlantic, are still problematic, particularly given the French penchant for eating baby hake.

Hake are both carnivorous and greedy, feeding on krill then graduating to octopus and other fish such as whiting as they grow. Jonathan Couch writing in A History of the Fishes of the British Islands in 1877 observed that: ‘When a school of pilchards is enclosed within a sean, it will commonly happen that several hakes are cooped up with them; and when the tucking of the sean is in progress, for the purpose of taking up the imprisoned fish, the hakes are often found so filled with smaller fish as to be utterly helpless. Seventeen pilchards have been found in the stomach of a hake.’

They are usually best cut into steaks or cooked on the bone. Tail pieces can be a bit tricky as they don’t keep their shape well and are hard to turn over when frying. However, the fish can be poached,steamed, baked or fried and lends itself beautifully to baking en papillote (wrapped in greaseproof paper parcels). It also combines beautifully with other fish in mousses and fishcakes.

In the Basque country, the arrowhead- shaped flesh of the hake’s lower jaw is a great delicacy. These kokotxas are frequently served al pil-pil (in a sauce made by emulsifying olive oil, lemon, garlic).

In Portugal, filetes de pescada (hake fillets) are first marinated in lemon juice, garlic and salt before being fried in a light batter, while pescada com todos (hake ‘with everything’) includes just about every ingredient in season, from greens to carrots, onions, potatoes and hard-boiled eggs with a drizzle of olive oil and vinegar.
One of the most delicious recipes for cooking a whole hake is a Sicilian one, nasello all’ Palermitana (roasted with rosemary, anchovies and garlic), however, a simple hake and tomato gratin made with grated cheese and cream is just as quickly cooked as it is eaten.

Given its affinity with such a broad range of ingredients as diverse as bacon, horseradish and coconut and the versatility of cooking methods, it’s about time we Brits recognised hake for its worth and put it right to the top of our shopping lists. 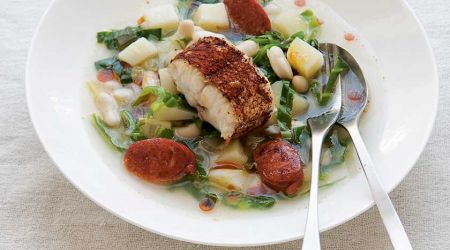 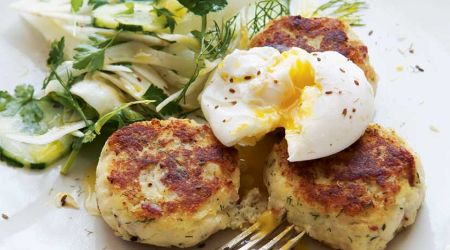 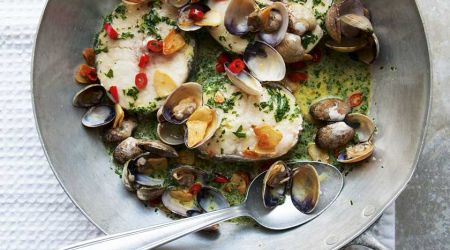