Sprinkle a little sunshine into your dishes this month, says Clarissa Hyman, as she celebrates the cheery citrus fruit – an indispensable and everyday ingredient for cooks with recipes by Liz Franklin, Brian Glover and Rosemary Stark

Abowl of lemons can light up the kitchen on a chilly, slate-grey day. Their vitality and vivid colour bring memories of bright blue skies and southern sunshine. Undeniably beautiful, they are also indispensable. At their best at this time of year, lemons are one of the few imported fruits we rely on year-round, but whose value and true worth we simply take for granted. It is impossible to imagine cooking without a lemon within easy reach to add accent, sharpness, juice and zest. Without the lemon, rich in citric acid, dishes would be flat, dull and two-dimensional. grilled mackerel with preserved-lemon mayonnaise and parsnip chips millefeuille with lemon curd and cream The fruit works both as a pleasant souring agent and a flavour enhancer, adding lustre, in particular, to fish, shellfish and poultry. The juice can ‘cook’ white fish in ceviche, and stop the browning from oxidation of cut fruit.

The zest gives a bright kick to cakes and sweets – lemon meringue, luscious lemon cake, lemon curd – and pancakes with lemon never lose their attraction. Lemon also brightens savoury stuffings and sauces, pairs naturally with herbs and oils, and has a particular affinity with capers, garlic and herbs. Pickled lemons are a magical addition to North African tagines and stews. And the world would be a poorer place in hot weather without a freshly made glass of lemonade or citron pressé. Luminous and sensual, their vivid colour, sweet curved shape, aromatic peel and sharp, acidic flavour evoke images of Silk Roads and Spice Routes, traders and travellers, poets and princes, and romantic tales set amidst verdant groves and delicate fountains. Although the Romans were familiar with them as a decorative curiosity originating in Asia, it was with the Arabic occupation of Spain and Portugal, Al-Andalus, that the lemon and its citrus siblings really arrived in Europe. The English word lemon derives from the Spanish limon, which in turn comes from the Arabic laimun and the Persian limu. The Arab understanding of the needs of irrigation in the semi-arid climate of Southern Spain enabled them to plant exquisite gardens and citrus groves that hinted of an earthly paradise.

Their oriental romantic allure captivated Thomas Moore, for one, who was inspired to write, ‘A Persian heaven is easily made; ‘tis but black eyes and lemonade.’ Cultivated Arabs were well used to using the lemon in cooking, and their use soon spread throughout Europe, although some Europeans were suspicious of fruit they connected with summer heat, dysentery and malaria. Gradually, lemons became increasingly widely used: they feature in many Dutch and Italian still-life paintings from the beginning of the 17th century, paired with bread, fish, lobsters or oysters, the peel often depicted cut in a dangling spiral. One of the earliest recipes using lemons, published in the mid-16th century by the Archbishop of Milan’s chef Christoforo di Messisbugo, was for marinated brill with lemon slices.

In France, the chef and cookery writer La Varenne popularised their use when he broke away from the heavy porridge stews of medieval times and devised piquant sauces made of meat juices combined with lemon juice, vinegar or verjuice. According to an old Spanish proverb, the equivalent of an apple a day is the trinity of garlic, onion and lemon: with a good daily dose, they say, you can forget the need for pills, injections and doctors.

In particular, the fruit of the citrus tree is rich in vitamin C, without which we would fall sick from diseases such as scurvy, the dreaded affliction suffered by European sailors who, centuries ago, set out to circumnavigate the globe. Citrus fruit can be grown in a range roughly 35 degrees north and south of the equator; they prefer the sub-tropics, however, as they can suffer from blight and virus in excessive tropical heat. Nor can they tolerate frost.

In America lemons are mainly grown commercially in California, which produces more than the whole of Europe combined. Fresh lemons are now available practically all year round, but in order to transport them they are picked slightly green. To help them release as much juice as possible, use lemons at room temperature or cover them with boiling water and leave to stand for five minutes before squeezing. The most widespread cultivar is Eureka, which originated in Sicily and was introduced to California in 1858. It remains the definitive model, with its thin, smooth peel, and juicy, acidic fruit. All varieties have the typical citrus-smelling essential oil glands in their peel that add both flavour and perfume. For culinary use, however, avoid lemons that have been treated with sprays, dyes or wax, or make sure to wash them well if you can’t.

At a pinch, lemons can be kept for a couple of weeks in the fridge, so when the recipe calls for a squeeze of lemon, there’s little excuse to turn to a plastic yellow bottle that contains a pale imitation of the real thing. Lemons might be a small player in the fruit bowl but they still deserve our respect. 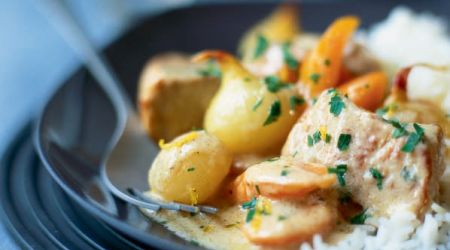 Sauté of veal with carrots, lemon and vermouth 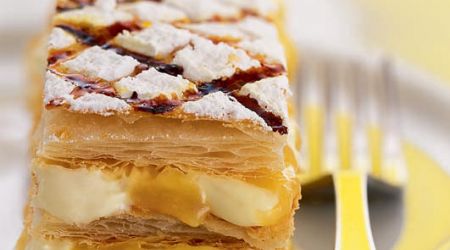 Millefeuille with lemon curd and cream 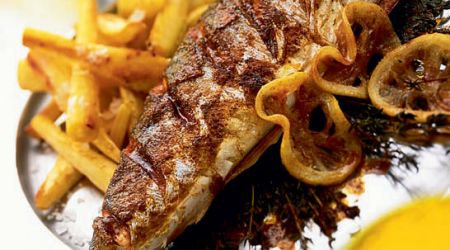