Fresh, sweet and plump – emerald-green peas are bursting with the taste of spring, says Helen Hokin with recipes by Linda Tubby

The French gourmand Grimod de la Reynière had it right when he called peas ‘the gayest song of the month of May’. At least, that is, as we know them today: glossy, emerald-green, sweet – a reminder that spring is in full swing. But until the 16th century, peas were a different matter altogether. Before then we really only knew the grey field pea which, once dried, soaked and stewed, continued to sustain the nation for a couple of centuries.

When it comes to the origin of the pea, historians can’t see eye to eye. Some say it hails from southern Asia while others argue it’s the Middle East. But at least they agree that peas have been around for a good 8,000 years and were one of the first plants to be domesticated. It is not surprising, then, that the ancient Egyptians, Romans and Greeks all knew peas, although it was the Greeks who took to eating them dried. A symbol of high refinement, they were simmered into a delicate and fragrant soup. But as the custom of eating dried pea soup was passed down through the ages and across to northern Europe, it morphed inexplicably from the ultimate emblem of sophistication to a grey gruel.

The posh Greek nosh showed up during the British Middle Ages as the ubiquitous ‘pease porridge’, a humble hotchpotch of ever-available dried grey peas and vegetables, embraced by the common people as a reliable and cheap staple food. To make it, the grey (split) pea was soaked overnight then boiled with whatever vegetables were to hand, hanging in a kettle over the fire to be eaten hot at night – ‘pease porridge hot’. In the morning, after the fire had been out all night, it was sliced and eaten in cold slabs – ‘pease porridge cold’. Since the kettle was topped up every time new ingredients were brought to the hearth, chances were the poor peasant would be eating ‘pease porridge in the pot nine days old’.

The pea soup centuries must have left us heartily sick of our pulse broth and as soon as its fresh cousin became available we relegated it to the back of the store cupboard, where it pretty much stayed put until the 1960s when health food junkies took it for a second outing. There is, though, a surviving Catholic custom involving families eating split peas on the fifth Sunday in Lent. Soaked overnight then fried in butter and seasoned, they are served as a kind of thick soup. Whoever gets the last pea in the dish will be the first to marry.

One balmy day in May, some time in the 16th century, plump peas suddenly began to inundate the country, sashaying in from the commercial gardens of Italy where growers had been working on producing new varieties designed to be eaten fresh. No more grey soup. They took Europe by storm. It’s not an understatement to say we literally went bonkers for fresh peas, but nowhere quite as much as France. Firstly, they were hideously expensive, which gave them instant caché, and no doubt because of their delicate size and subtle sweet flavour they were an instant hit with the ladies of the French court. During the reign of Louis XIV, a courtier named Madame de Maintenon observed that ladies in waiting were known to eat them before going to bed ‘at the risk of an indigestion’. The first green peas of the season were eagerly anticipated in the way we get antsy about the arrival of the first black truffles today. As peas grew in popularity, prices continued to soar and within a couple of hundred years, according to Brillat Savarin (one of the world’s first gastronomes), an early season plate of peas could set you back 800 francs – and that was in the 18th century.

It makes you wonder if the perceived superiority of petis pois over garden peas, which persists even today, took root back then in the height of Gallic pea mania? Garden peas, traditionally preferred by the Brits, and petit pois, the pulse of choice on the other side of the Channel, are in fact one and the same pea – it’s just that the latter is the product of dwarf fruits that are harvested when very young.

Catch the fleeting pea season while you can; it doesn’t last long. Buy them, wherever possible, in their pods and look for those that are bright, squeaky, green and firm, not floppy. The sugars in the pea turn to starch within hours of picking so as the pea ages it takes on a slightly mealy, pulse-like texture. For that reason, bulging pods are best avoided since the peas inside are likely to have aged too much already. Eat peas as fresh as possible and avoid storing them more than a day in the crisper section of the fridge. Pod them just before you plan to eat them. Discard hard peas since they, too, are old and will have an unpleasant, gritty bite. Boil peas in lightly salted water – gently topple them in and simmer for no longer than three minutes. Overcooking will result in the dull greying of their emerald gloss. Drain and serve immediately. Peas are incredibly versatile and work well with asparagus, bacon, butter, carrots, celery, chicken, cream, ham, leeks, lettuce, mint, onions, parsley, prawns, rice and sage. There’s nothing quite as glorious and refreshing as an early summer iced pea soup. 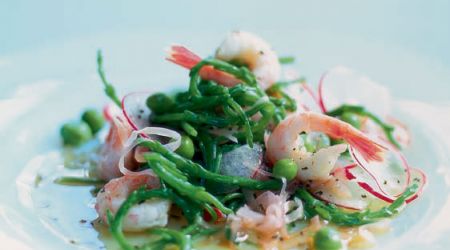 Salad of samphire, peas and prawns with pink pickled ginger and radishes 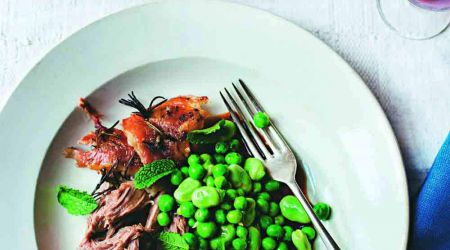 Slow-roasted shoulder of lamb with peas and broad beans 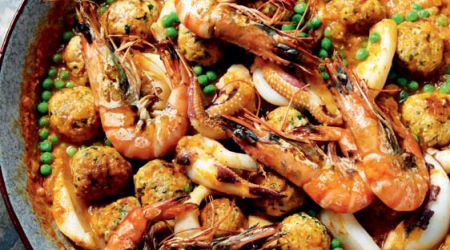 Cuttlefish with meatballs and peas