This super-fine flatfish is the perfect foil for strong, punchy flavours. Or, more classically, lashings of melted butter, lemon and parsley. It’s not Europe’s most popular for nothing, says Clarissa Hyman

If ever a fish was a boon for punsters, it has to be the ever-so-humble plaice. When it comes to naming fish and chip shops, it brings out the best in the nation and is the gift that keeps on giving, rivalled only by its fellow traveller, cod. So, a brief trawl in the name of research appropriately brought up such gems as Our Plaice, First Plaice, Perfect Plaice, Manchipster Plaice, Rock and Sole Plaice and, the almost ecclesiastical, Cod’s Plaice.

The Flemish name for plaice means ‘beautiful maiden’ (mooie meid) and, when sea-salt fresh, the distinctive, bright tangerine-orange splodges irregularly distributed on its greenish-brown back contrast fashionably with the glistening pearl-white belly. The chevron markings on the latter indicate the pattern of muscle bands, and the white underside helps the fish blend in with its environment if seen from underneath. Curiously, the fish are also able to adapt the colour on their backs to match that of their surroundings but the orange spots always remain visible.

Alan Davidson, in North Atlantic Seafood, recounts how a Danish fisherman from Esbjerg described their technique of dealing just-caught plaice as ‘a man’s way of cooking’. This involves gutting and skinning the back of the fish, placing in cold seawater and bringing to the boil before turning off the heat and leaving covered for ten minutes. The plaice is then drained and served with potatoes, melted butter and parsley. Simple but perfect. Even for the laydeez.

Plaice, indeed, needs to be very fresh: its light delicacy is soon lost as it stales. Danes like to buy their plaice alive, which is not as difficult as it might sound as plaice are apparently tenacious in their fight for life. In the 19th century, Francis Day recorded in The Fishes of Great Britain and Ireland that one remained alive for an astounding 30 hours after being removed from the water.

The fish is found from the Western Mediterranean to Iceland and Norway as well as all around the British Isles. However, their popularity, long life and the overuse of heavy beam trawlers have led to overfishing, diminution of stock and the discarding of other species from trawl fishing. As a result, plaice stocks vary around the UK but, nonetheless, there are sustainable choices to be had from MSC sources in the North, Irish or Celtic Sea and Eastern English Channel (look for the blue tick logo). It is also important that the fish conforms to a legal-minimum landing size; a mature plaice usually measures around 35cm.

They are best avoided when spawning between January and March as they can be of poor quality, flabby and tasteless. During peak season, the opaque white flesh takes on a particular brightness and the fish has a green aroma that has been described as fresh garden peas with mint.

Plaice, or Pleuronectes platessa, seems in many respects a very English sort of fish, decent and well behaved. Nothing frightening, nothing gruesome. Tasty, sweet and unassertive if a little bland; delicate with a clean, faintly lemony acidity if lacking a touch of sensuality; the texture is fine with almost imperceptibly small flakes. However, if poorly cooked, the tidy, regular fillets can summon up the school sanatorium. At worst, they can be as boring to eat as blotting paper.

Generally, plaice hang around smooth sand and mud, sometimes burrowing into the sediment during the day and remaining stationary for long periods. Usually they are found at depths of between 10 and 50 metres, although they are sometimes found as deep as 200 metres. Night-time feeders, they wait for anything edible to come past, but they have a greedy fondness for young seed mussels and can suck in these easy pickings by the dozen. Nick Fisher, co-author of The River Cottage Fish Book, has vividly described counting over 20 whole mussels in the belly of a single plaice, ‘making this normally svelte creature look like a python who’s swallowed a poodle’.

Skilfully cooked or fried, however, the meltingly soft mouthfeel can rival that of the velvety sole. The Danes and Swedes share the British fondness for the fish, serving it with cranberry sauce, smoked bacon or coriander seeds, dill and tarragon. Filleted, battered or breadcrumbed and pan-fried, it is popular hot or cold as a topping in open sandwiches together with tartare sauce. In Britain it is more likely to be found in the chip shop. A popular Belgian recipe pairs it with mashed potatoes and sorrel. Our own Delia has a tried-and-tested recipe for oven-baked plaice with a parmesan crust. The fish can also stand up to big, bold flavours such as a rosemary, caper and anchovy butter or a wasabi dressing. A large, whole plaice can also be roasted with cherry tomatoes, garlic and herbs. Or enliven steamed fillets with chilli-garlic prawns. Lacking bones, the fillets can be rolled and stuffed with a wide range of ingredients from mushrooms to fresh spinach, prawns, pine nuts, anchovies and mushrooms.

Plaice meunière – a luscious classic dish from the days of haute cuisine, awash with butter, lemon and parsley – deserves revival. In fact, I’ve just decided that’s what’s on the menu for supper tonight. Your plaice or mine? 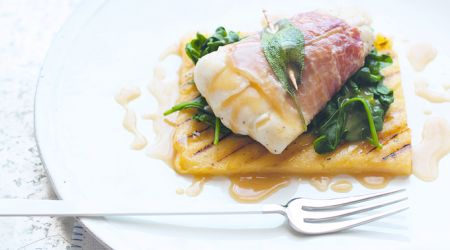 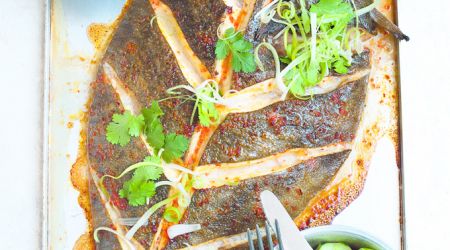 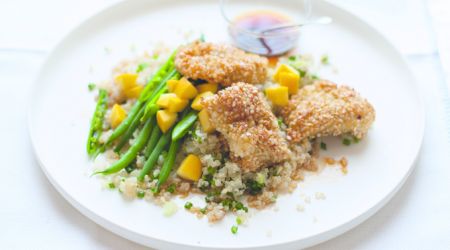 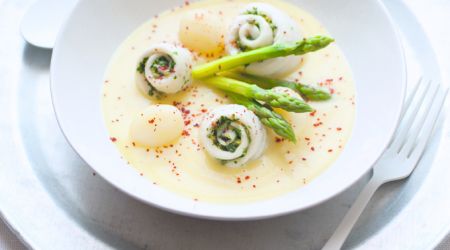