This glorious green yields its charms over time – the leafy veg we hate as children is one we can’t live without as adults, says Clarissa Hyman with recipes by Linda Tubby

At a certain point in most people’s lives, a magical transformation occurs. That blind, unreasoning hatred of spinach – you’ve never tasted it, but you just know you loathe it – is transformed, like a pumpkin at midnight, into a vision of joy and beauty. Okay, that might be overstating things, but it does
seem that spinach is for grown-ups – whatever Mr Popeye has to say.

Perhaps the widespread childhood revulsion is due to the brutal treatment so much spinach has suffered at the hands of careless cooks over the years. A slimy mound of battle-dress green on the plate is never going to tempt youthful tastebuds – especially when promoted with the dreaded tag line: ‘And, it’s good for you.’ Yeah, right…

Yet once you get hooked on a mound of buttery green leaves, there’s no turning back – even to the point of loving it raw, when the crisp leaves have a fresh flavour and a pleasantly astringent aftertaste.

Spinach is believed to have originated in Asia, probably Persia; it was not known to the Romans, but was probably introduced to Europe by the Arabs or Crusaders, if not both. According to the 12th-century Arab writer Ibn al-Awam, it was the ‘prince of vegetables’. Its name in English derives, via Arabic, from an old Persian name, ‘aspanakh’.

Spinach first came to England and France in the 14th century, and quickly became popular as a vegetable and salad green when it appeared in early spring, at a time when other vegetables were scarce and Lent restricted dietary choice. Spinach is mentioned in the first-known English cookbook, The Forme of Cury (1390), where it is called ‘spinnedge’. When Catherine de Medici, born in Florence, became queen of France in 1533, she so loved spinach she insisted it be served at every meal. This is recalled in the classic French culinary term ‘Florentine’ given to dishes made with spinach (though this is not its meaning in Italy; the term fiorentina means a style of cooking from Florence).

Spinach is easy to cultivate and, homegrown, ensures you’re not getting it after it has been sprayed with an excess of chemicals. Most varieties are at their best in spring and autumn, although ‘Giant Winter’ is particularly hardy and can crop during very cold months. ‘Trinidad’ is slower to bolt in the summer. Kitchen gardeners have a wider choice of varieties, including ‘Bordeaux Red’ with striking red stems and star-shaped leaves, ‘Mediana’ with a pleasant, earthy flavour, and ‘Scenic’ which has a soft, melt-in-the-mouth texture and slightly bitter flavour. The gardener’s choice,
perhaps, is ‘Dominant’, favoured in Raymond Blanc’s vegetable garden at Le Manoir aux Quat’Saisons for its superb texture and taste, and resistance against mildew and other diseases. Despite its name, ‘Perpetual’ spinach is a leaf beet, with large, thick, rather coarse leaves.

Good farm shops will sell freshly picked spinach immersed in a bucket of water, and the leaves should look morning-bright. If buying it in a pillow pack, make sure the leaves do not look bruised or tired, and if not already pre-washed, wash in several changes of water, allowing the leaves to soak each time so that dirt and grit sink to the bottom of the bowl. Remove the leaves from the water rather than draining it off, dry in a salad spinner, then blot on paper towels. It cooks very quickly and, as it is mainly composed of water, reduces to a tiny, glossy puddle.

There are thousands of spinach recipes. It’s an ideal vegetable for a desert island choice, marrying with just about anything. It can be eaten raw with nuts, cheese, oranges, fennel and the like, but also appears in tarts, curries, soups, pasta, dumplings, omelettes and more egg dishes than you can count. Dairy products somehow seem to moderate any residual sharpness so spinach melds beautifully with butter and cream, and never fails as an accompaniment to fish.

The Moorish roots of spinach are reflected in a lovely dish of chickpeas and spinach by Sam and Sam Clark of Moro restaurant in London that is also flavoured with garlic, cumin, oregano, chilli, red-wine vinegar, saffron and sweet smoked Spanish paprika (pimenton). Hugh Fearnley-Whittingstall has created a sustaining and homely one-pot supper or ‘spoufflé’, as he calls it, with spinach, penne, eggs and cheese; Mark Hix, on the other hand, suggests creamed spinach, lavishly enriched with double cream, as a luxurious, spoiling accompaniment to grilled meat or fish.

Finally, to let you into a little secret: although spinach is an excellent source of vitamin A and folic acid, according to Tom Stobart (author of The Cook’s Encyclopaedia) the iron it contains is cancelled out by the oxalic acid content, meaning that we cannot absorb the minerals effectively before they are excreted. Following the contrary laws of childhood, if parents were to tell their children spinach is not actually that good for them, then a lot more of it might be eaten. 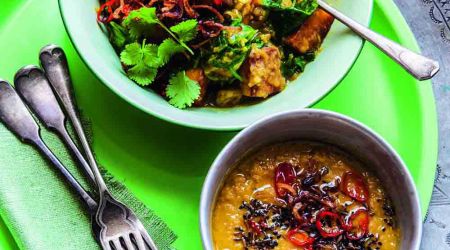 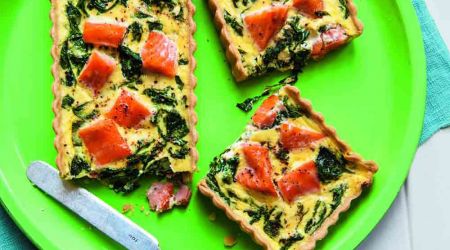 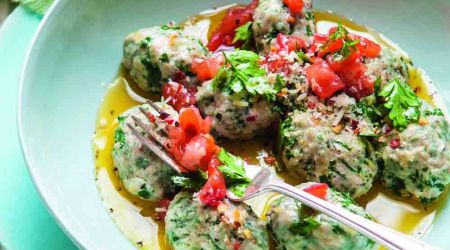 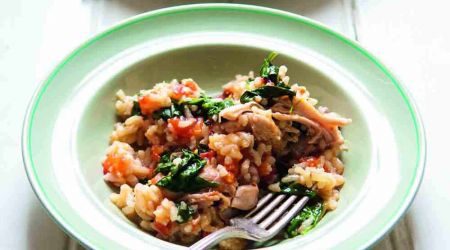