Dubbed the ‘King of the Sea’ for its rich flavour and firm, white flesh, this premium flatfish is the star ingredient in this indulgent collection. Clarissa Hyman puts the (copper) kettle on

When Rick Stein was asked by The Daily Telegraph to name his dream Christmas present, he chose a copper turbot kettle to replace one lost many years ago. Leaving aside the question of just how one can lose such an enormous, ornate and extremely heavy piece of kitchen kit, it is still perhaps the ultimate fish-lover’s indulgence. The 13-litre Mauviel M’Tradition – pause for gasp – costs £1,230, so not something to stuff in the stocking as an afterthought. However, should you ever be lucky enough also to find a whole, large turbot, the king of white fish, the diamond-shaped kettle is the perfect pan for the job. Extravagant but utterly exquisite, the late food writer Alan Davidson claimed to have owned a turbotière before even a frying pan.

A very large turbot is not easy to cook whole. The Roman emperor Domitian is said to have consulted the Senate about such a problem (although we have no record of its response). The turbotière, or turbot kettle, was designed in the 19th century, and is still found in regular service in grand French kitchens where they think nothing of dishing up a 10kg turbot for passing aristocrats. When cooked, it can be simply lifted by the handles of the perforated rack which sits inside the kettle. Failing that, you can bake the fish on an oven tray, but that’s far less romantique.

The great gourmet and epicure Brillat-Savarin is said to have tried to cook a large turbot in a household that had no turbotière (imagine, the humiliation of the owners), improvising with a flat wine pannier strewn with chopped onions and herbs on which he placed the turbot. The fish was covered with a washtub and steamed over a water-boiler on top of the stove. He reportedly judged the result excellent since the fish had lost none of its good qualities, as it would have done if immersed in boiling water but had, on the other hand, fully absorbed the flavours of the various seasonings.

Turbot is found in the Mediterranean and the Pacific as well as in the Atlantic as far north as Norway. The main fishery, however, is on sandbanks in the North Sea, where they dwell on the bottom of the seabed feeding on whatever tasty fish and crustacean morsels come their way. Virtually scaleless, its skin is instead covered with sharp, bony, toad-like tubercles and small black-and-white spots; the colour of the back matches the sea bed, so it is usually sandy brown. As with its cousin, the brill, the eyes are both on the left side of the head, which is tiny in comparison with the fish’s massive body.

Highly prized and, therefore, expensive, Jane Grigson described turbot as having a ‘tender firmness’. It is rich and sweet in flavour, flaky but firm of texture and deliciously juicy. It holds its shape well when cooked, so is versatile, and lends itself to grilling, poaching, steaming, pan-frying and even stir-frying. The classic recipe for poached turbot sees the fish teamed with oysters and champagne, but turbot also goes exceptionally well with hollandaise sauce or one made with shrimps and cream. Overpowering flavours should be avoided: indeed, elaborate accompaniments are wholly unnecessary and usually ill-advised.

Although sometimes sold as fillets, these are usually unsatisfyingly thin (and probably from too small a fish). Really, turbot is best cooked on the bone. Thick-cut steaks or tranches are sold with the backbone running through the steak and these are excellent to grill, although you need to baste them with butter throughout the cooking. The secret to successful turbot cookery is not to overcook. Whichever method you choose, the turbot will be cooked when the flesh becomes opaque but is still moist and can be easily pierced with a fork. The thick skin when cooked is rubbery and tough but peels off easily.

The fins are held to be especially flavourful. In The Book of Household Management, Mrs Beeton recounts the tale of a bishop who, descending to his kitchen to supervise the dressing of a turbot, discovered his cook had stupidly cut off the fins. He immediately commenced sewing them on again with his own episcopal fingers. As Mrs B herself noted, this dignitary knew the value of a turbot’s gelatinous appendages.

Wild stocks have diminished, so line-caught turbot should remain in the realm of special occasion. The Marine Conservation Society notes that there is very little management of turbot fisheries and a general absence of stock data. The available information suggests North Sea levels are increasing but from a low level. Catching fish using static nets and bottom trawls can damage fragile marine habitats and other wildlife, so they advise it as difficult to regard wild caught turbot using these methods as a sustainable choice.

In recent years fish farms have been established in Spain, France and Chile: according to Nick Fisher of River Cottage, turbot need to eat fishmeal, which remains one of the thornier problems of aquaculture. Responsible producers make an effort to provide feed from a sustainable supply but because they are grown in huge indoor tanks rather than the open sea, unlike salmon, the overall environmental impact of farming them is relatively low. One particularly successful farm is located in the tunnels of an old German-built gun emplacement on the island of Jersey, where the fish live in natural sea water and are fed on specially prepared food.

A piece of poached, pure-white turbot, served with hollandaise and a few new potatoes fresh from the garden is edible perfection; so delicious it makes your heart skip a beat. I’m saving up for a kettle. 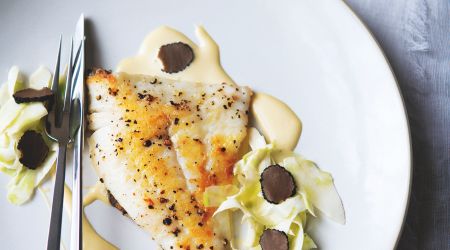 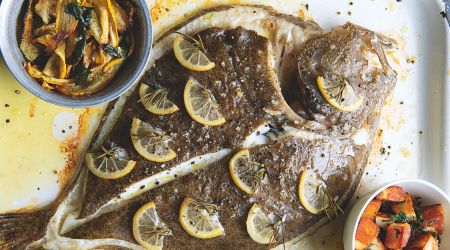 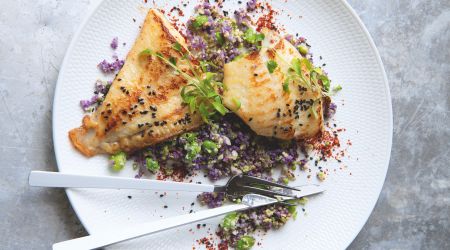 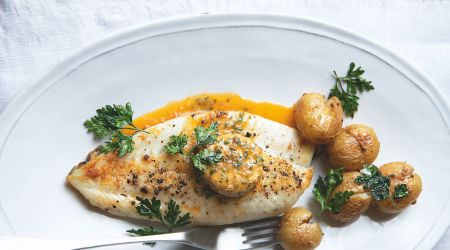