Half of the salmon sold worldwide is farmed, but its wild Pacific cousin is plumper, richer and, arguably, more delicious. Clarissa Hyman fishes out the facts

Legend has it that a worrying number of children when asked where peas originate, answer, 'the supermarket'. No point in mocking, though. Not that long ago, an older generation assumed salmon only came in tins. The question of wild or farmed simply was not a thing. Nor was a whole poached salmon grandly adorned with cucumber and lemon slices, unless you had your own Scottish castle. The irrepressible boulevardier Keith Floyd once described lyrically, if a little bibulously, his fondness for cold salmon with mayonnaise, preferably cooked and served by someone else under the shade of elegant trees on a manicured lawn. ‘In your crumpled lightweight suit and with a bottle of Meursault at hand, there is no better way of posing in the English summer.’

Wodehouse fantasies aside, for many, salmon high tea was synonymous with salmon from a tin, and the choice was pink or red, either drowned in vinegar or smothered with salad cream. Had you asked for wild salmon some years ago, there would undoubtedly have been hoots of disbelief. ‘As opposed to “tame”, ho-ho’, would be the jocular tease. All salmon was ‘wild’, virtually by definition.

In the 1970s, however, stocks of wild salmon dramatically declined. The depletion was due to a complex mix of factors such as overfishing, pollution, migration barriers and environmental conditions. However, as wild stocks decreased to virtually zero, they were matched with an equally rapid rise in aquaculture. Farmed salmon was set to become one of the world’s best-selling species. As a result, the sale of wild salmon is now rigidly controlled, although some Irish companies are allowed to smoke a portion of their healthier river-run fish. Thus, just about every piece of Atlantic salmon sold in the UK, raw or cooked, smoked or fresh, is farmed.

The problem is that at the lower end of the industry, overcrowded, poorly -husbanded fish farms that produce flabby pink fillets have unsurprisingly attracted bad publicity. Although they are increasingly better managed, there is still controversy over pollution, lice, chemicals, escapes and feed composition. Both responsibly- run farms and, especially, organic ones go to great lengths to try to ensure sustainable feed and care, but it is not always easy for a consumer to make an informed choice.

An alternative is wild Pacific salmon, caught from Alaska to California under the supervision of MSC-certified fisheries during a strictly-controlled season. Two varieties, Chinook (aka king) and coho (aka silver) are also farmed in regions such as Washington State, although all fish farming is banned in Alaska. Unfortunately, there is ongoing controversy over the impact on natural stocks of farmed fish escapees.

The other three main types are sockeye (aka red), chum (aka dog or keta) and pink (aka humpback or spring). Pacific salmon tends to be a much deeper red than the pink of the Atlantic fish (although the latter can often be dye-enhanced). It is rich, oily and muscly but has a stronger, denser taste than its Atlantic cousins.

Wild salmon are also usually much larger than farmed ones, spending most of their life at sea but returning to freshwater to spawn. They have an epic journey in which they are transformed from tiny minnows into great beasts packed with millions of ripe eggs, ready to spawn a new generation. These minute eggs may remain buried in the gravel of a cold stream for many days before they hatch and move through various life stages before they are ready to return to the ocean from the river. It will be a risky business: apart from being hunted by birds, seals and other fish, not to mention the fisherman, the young salmon also has to undergo a physiological transformation to enable it to survive in corrosive salt water and reach its feeding grounds, often thousands of miles away.

Once grown, the salmon again has to avoid nets, trawlers, seals, dolphins, pollution and poachers to re-enter the river from which it first came, deploying a remarkable migratory instinct that enables it to find its way unerringly back to its native river. The final fight to swim upstream is even more extraordinary and dangerous than the reverse.

Across the species, they are noble creatures both in behaviour and looks. The handsome silver skin is dotted with black spots on the upper body and head, and the plump, fatty flesh is a deep, natural pink thanks to the krill on which it feeds. Writer Alice Thomas Ellis compared the colour of the Atlantic salmon, when poached, to the Albertine rose, also at its best in early summer.

Recipes for salmon are legion, ranging from Finnish salmon soup with potatoes and dill, Swedish gravlax, Russian kulebyaka stuffed with fish, hard-boiled eggs and dill, barbecued Canadian salmon steaks with fiddlehead ferns to Northumberland’s potted salmon. It is a wonderfully versatile fish that can be grilled with capers and lemon, steamed with ginger and greens, or cold-smoked and served with scrambled eggs. A whole poached salmon with chive-sprinkled new potatoes is still a splendid sight, guaranteed to elicit an appropriate chorus of approval among guests.

Food historian Alan Davidson quoted one of the earliest English fish cookery books, Fish and How to Cook It, by Elizabeth Watts (1866), in which Watts tells the story of the Frasers of Inverness-shire, who used to surprise their guests with a voluntarily cooked salmon.

‘A kettle was placed on a flat rock on the south side of the fall, at the water’s edge, and kept full and boiling until a salmon fell into it.’ Happy days, though not, perhaps, for the salmon. 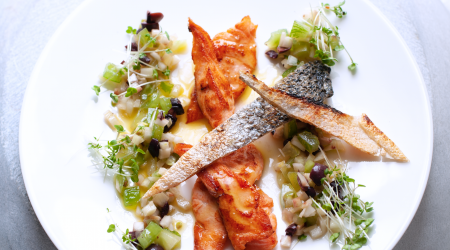 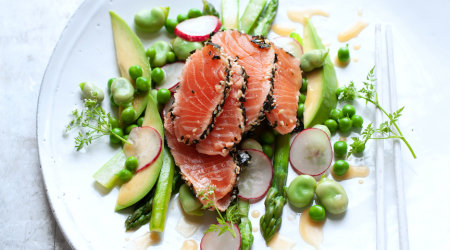 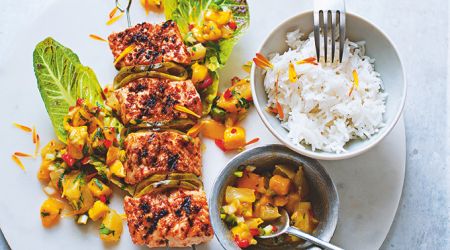 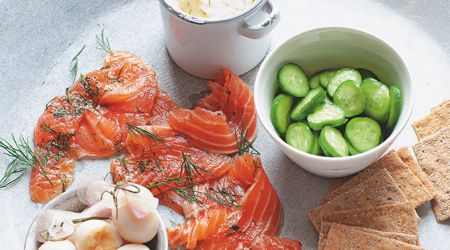