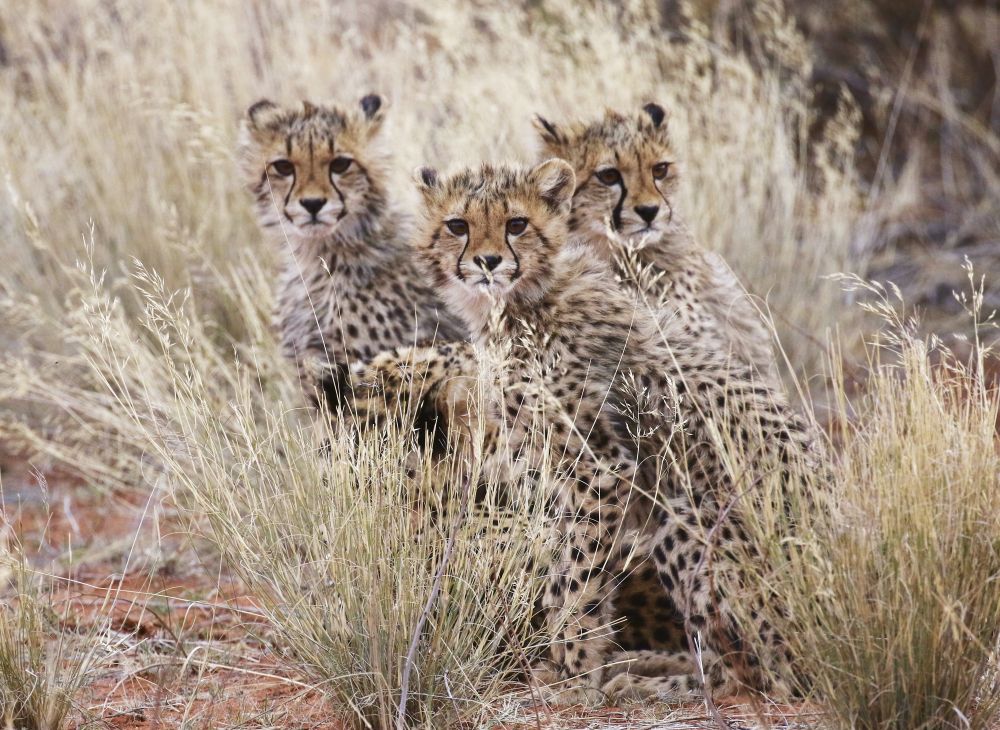 Call of the Wild

Looking for safari experiences with a difference? Whether it's more impressive eco credentials or putting your tourist's bucks to better use, Melanie van Zyl unearths exciting ways to be captivated by Africa

Culture Experience the wildlife and understand the people living around it in Kenya, South Africa and Botswana

It may take place outside the wildebeest migration season, but a trip that explores the Maasai Mara on foot will captivate true wilderness lovers. Starting in the Naboisho Conservancy and ending in the Mara or Acacia House of the Greater Maasai Mara, this is an ode to contemporary Kenya. Many communities pay the price for Africa’s big draw card because over 60 per cent of Kenya’s wildlife live outside protected areas on community and private lands in the rangelands. Traversing conservancies on foot with Asilia Adventures will have you walking 15–20km per day to see at first- hand how community and conservation projects work to support both the land and its people. The Maa Trust, for instance, supports various community projects, including beekeeping, healthcare and education, and you’ll get to meet Maasai women at the beadwork project. This is a voyage into the Mara – real and raw – at a time when the migratory birds bulge its recorded bird list to a count of 500 and Thomson’s and Grant’s gazelle, zebra, oribi plus Coke’s hartebeest trot nearby.

Culture and community are integral to the conservation vision at Tswalu Kalahari Reserve, South Africa. Game drives, nature walks, animal tracking (oryx, giraffe and ostrich are frequently sighted when searching for desert black rhino and African wild dog), horse riding, stargazing, dune breakfasts and spending time with habituated meerkats are all built in. And a fascinating food journey is interwoven, since to thrive in the sloping red sands of the Kalahari Desert, one has to be rather resourceful. Cultural ingenuity in the arid Northern Cape becomes tangible once you take a seat at Restaurant Klein Jan, conceptualised by Michelin-starred chef Jan Hendrik van der Westhuizen. Each seasonal dish served at the century-old farmhouse is deeply rooted in heritage foods and shines a light on culinary traditions (such as fermentation and preservation to further the scarce desert food sources), ingredients and produce. One example? Indigenous small, spiky cucumbers and melons traditionally harvested by San tribes for precious hydration. The leaves can be cooked like spinach, while the dried flesh is delicious in stews. Then there are the grapes and citrus fruits watered by the oasis of the nearby Orange River and dried for use in winter, plus ethical meats, handmade cheeses, craft spirits and Kalahari salt. In-house guests of the Motse and Tarkuni camps are invited to experience a memorable meal during their safari stay. Be sure to tie your sauces to the source with a visit to rock art sites – petroglyphs are a highlight – and ask about the accompanying myths and stories.

See the land through ancient eyes on a visit to the expansive Makgadikgadi salt pan network by walking with Zu/’hoasi bushmen (the original inhabitants of southern Africa) during a stay at Botswana’s iconic and lavishly revamped Jack’s Camp. First, some context. In 1961, the Central Kalahari Game Reserve (CKGR) was created as a protected area for the San people to live traditionally, hunting without interference. However, a series of government policies has seen the removal of the San from this land in the interest, it says, of better delivering services such as schooling. Entering the area as a student helps ensure the conservation of this fast vanishing culture. The short walk touches on their unique hunting and foraging skills and provides an insight into the animals you’ll see, such as tortoise, steenbok, springbok and jackal.

Off the beaten track and yet easy to reach from Johannesburg, Marataba Conservation Camps upgrade the safari experience from animal observation to tangible mammal management. Sure, you can enjoy boat cruises along the scenic Matlabas River, track cheetah on foot and soak up the luxury of the Founders Camp suites, but you’ll also spend time with the conservation team on the ground in this section of Marakele National Park at the foot of the Waterberg Mountains. Learning about snare patrol, ecology surveys and habitat rehabilitation grants an insider’s understanding of what it takes to maintain this wild place. Although, to be frank, the most exciting opportunity has to be rhino management. The team uses ear notching patterns to recognise individual rhinos in order to better monitor the population and take action when something goes wrong. The long-term objective is to have every single rhino at Marataba identified. To achieve this, they run three- day Rhino Conservation Safaris (this year, they start on 8 and 11 August) dedicated to the registration of the animals. Help fund and join in the action of immobilisation and notching the animal, then inserting a DNA microchip into the horns and body.

Being light on the earth takes on a whole new meaning at Emboo River Camp. Instead of chugging across the savannah, startling zebra or wildebeest in a diesel 4WD, you’ll float through the grasslands of Kenya’s iconic Maasai Mara in one of the region’s first electric game drive vehicles. This luxury camp runs solely on solar energy, thus powering the all-electric fleet of cars, but the conservation of resources doesn’t end there. Every aspect of the carbon-negative safari – right down to your meals – honours the ecosystem. Emboo champions plant-forward plates with 100 percent farm-to-fork meals from their two organic vegetable gardens (all cooked using biogas) and aims to run an entirely eco-friendly kitchen. Chefs have already booted cling film, tin foil and parchment paper from the cupboards and shun single-use items, opting instead for the likes of beeswax paper, metal straws and cloth napkins.

Sussurro Mozambique is likewise looking at the bigger conservation picture while providing a seriously upscale seaside safari. Set in a pristine lagoon of the Bazaruto Archipelago, this new, light-footprint lodge will have you sailing on dhows across sapphire seas and dipping below the surface for world-class underwater outings. The Bazaruto Archipelago National Park is Mozambique’s oldest Marine Protected Area and hosts 141 bird species, 18 reptile species, 21 mammal species, five dolphin species, plus an estimated 180 dugongs. Then there’s the seafood. Mindful attention ensures every table supports local fishermen, organic farmer’s markets and sustainable traders with the likes of crispy salt and pepper chilli squid, aubergine ravioli folded in rocket-cashew pesto and traditional curried mangrove crab. A stay here also enables every guest to physically offset the emissions of their visit by helping reforest the Nhamabwe
salt pan with indigenous mangroves.

Walking Safaris Get up-close to wildlife safely with the experts in Uganda, Botswana and Namibia

With as few as 1,000 individuals left, the enigmatic mountain gorilla is one of the world’s rarest animals. You could seek one out in Rwanda and the Democratic Republic of the Congo. However, Uganda’s Bwindi Impenetrable Forest National Park is a woodland wonderland for the walk of a lifetime. Just know that its name is apt: thick, densely towering trees, twisting vine tendrils that scale upward, fern plant explosions and slip-sliding mud paths, so you’ll need robust waterproof walking boots. Make time to enjoy the forest beyond gorilla trekking too: there are over 340 bird species (including the African green broadbill, spectacular turaco and Chapin’s flycatcher) and immersive walks to waterfalls where you may even come across a shy forest elephant. Gorilla Safari Lodge sits on the fringe of all this in a small village called Rushaga, with 18 luxurious cottages. Although accustomed to human presence, the herbivore gorillas live free, foraging through the forest eating leaves, shoots and sometimes bark. Tracking them can take anything from half an hour, if you’re lucky, to six hard hours of hiking. A good reason to book a unit with a bath – you’ll be wanting that soak after a long day on foot.

For intrepid walkers, the Okavango Delta is prime trail territory. Moremi Crossing Camp has local Botswana guides with decades of on-foot experience that will lead you to Chief’s Island for phenomenal wildlife encounters. The island sits inside the Moremi Game Reserve and is the largest in the Delta, at roughly 15km by 70km. During the dry season, between June and September when floodwaters rise, it transforms into a refuge for abundant animal life. Even accredited guides aren’t permitted rifles inside the reserve – there are two guides on every walking safari – making them especially mindful. Highly tuned senses ensure no agitating the wildlife. Elephant, hippo, red lechwe, lion, wild dog, zebra and giraffe are just some of the creatures you could meet, and these guides know how to navigate the Delta without disrupting the natural rhythms of this teeming world.

Most visitors to Namibia will snatch only a tiny glimpse of the world’s oldest desert, with a visit to Deadvlei or Sossusvlei. For total immersion, a slow stroll through the Namib sands better reveals the fascinating creatures that glean nourishment in such arid surroundings. The three-day, two-night Tok Tokkie Trail is a rustic slack-packing adventure in the NamibRand Private Nature Reserve. It will have you sleeping under the stars on stretcher beds in the International Dark Sky Reserve by night (tents are provided in unfavourable weather) and looking for golden mole, barking geckos and fog basking beetle by day.

While the south is prone to over-tourism, Return Africa Pafuri Tented Camp lies in the underrated, remote northern realm of South Africa’s Kruger National Park. The focus is less on the Big Five and more on the land and the people who once inhabited it. This riverside camp lies in the ancestral home of the Makuleke people and every expedition celebrates their heritage. The area was forcibly taken by the Apartheid South Africa government in 1969, with some 1,500 people relocated. Today, after a land claim ensured its return, the Makuleke Community are equity partners in the tourism business, taking 10 per cent of gross revenue. The people you meet in the camp not only have a stake in the success of your safari but may have climbed the baobab trees as children. Then there’s the abundance of fauna and flora – the region makes up 1 per cent of Kruger yet contains 75 per cent of the total biodiversity. Look out for breeding herds of elephant, spotted hyena and Nile crocodile, and watch sensational birdlife flit above the Luvuvhu River from the deck of your swish tent.

Zambia’s Royal Chundu Lodge is proud to support the neighbouring economy, and the community commitment to the agricultural Malambo village and fishing-centric Muluka village is tangible in a delicious menu that champions indigenous foods, with everything on the plate sourced in the country. Between visits to Victoria Falls and rafting along the Zambezi River, you’ll savour katapa (cassava leaves), impwa (African aubergine), mongongo nuts and mundambi (a species of hibiscus) alongside local freshwater bream, traditionally caught via a wooden dugout canoe. The lodge has its own chicken coop, herb and vegetable garden, supplemented by mangos, chillies and spinach brought in by staff. On top of this, £18 is added to each night’s stay, which funds The Royal Chundu Foundation School (aiming to educate and feed 500 children a year), an adult literacy programme, an online hospitality programme and a culinary school. For wildlife, take a Rhino Walk, upstream in Mosi-oa-Tunya National Park.

Been there? Done it all? Take a three-day trip up an Ethiopian escarpment and revel in the forested Rift Valley. A Wof Washa Community Trek is reasonably exerting with modest but comfortable accommodation. Few tourists will have seen the unique plant, animal and birdlife; a troop of gelada baboons patrol, raptors include lammergeier and Verreaux’s eagle, plus reliable reports indicate Ethiopian wolf can be seen in early morning or late afternoon. It’s run by TESFA (Tourism in Ethiopia for Sustainable Future Alternatives) in partnership with local communities, enabling them to register as private businesses.