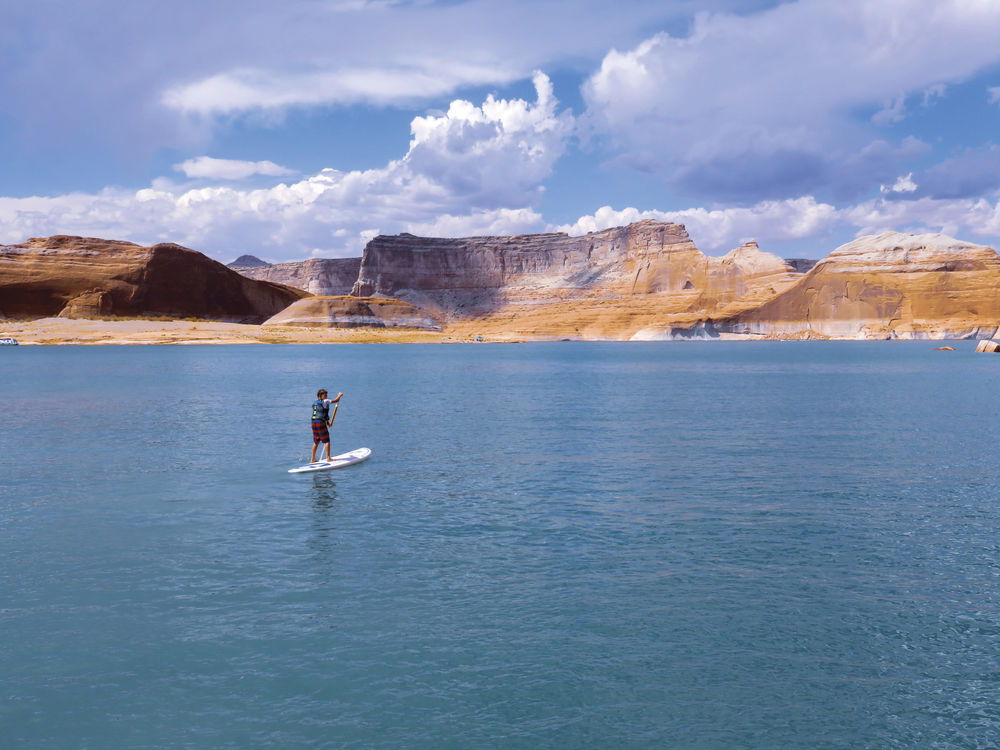 An inland beach holiday can be the best of both worlds as the most stunning lakeside retreats across the globe blend water-based activities with history, culture and, very often, exceptional dining options, says James Litston

Alpine scenery, fairytale castles and a constellation of Michelin stars: no wonder Lake Annecy has long been a holiday hotspot. Famously painted by Paul Cézanne in 1896, the clear lake waters are fed by springs and ringed by hills and peaks, presenting a scenic backdrop for outdoor activities. See it all from above while paragliding down from a mountainside launch, or hit the water with a paddleboard, pedalo, pleasure boat or water skis. The Lake Annecy greenway offers traffic-free touring by bicycle, foot or rollerblade, with the chance to dive into the water at the dozen or so beaches.

At the lake’s northern end lies the charming town of Annecy itself, criss-crossed by canals and emblematic buildings lining historic, cobbled streets. Major landmarks are the Musée-Château with its 13th-century Queen’s Tower, and the Palais de l’Ile which sits in the middle of the river.

Many restaurants champion seasonal, lake-to-plate dining, and the area as a whole garners 11 Michelin stars. Highlights include Yoann Conte’s two-starred La Maison Bleue with its waterfront terrace and Laurent Petit’s three-starred Le Clos des Sens with it’s great lake views. The town is awash with bistros and cafés where you can try delicacies such as Reblochon and Tome des Bauges cheeses. Get there on the second Saturday in October to experience Le Retour des Alpages festival, celebrating local products, crafts and traditions.

Macedonia, right at the heart of the Balkan Peninsula, has a colourful history spanning Alexander the Great’s empire in the 4th century BC and on through the Byzantine and Ottoman periods. This long legacy has left the country replete with churches, monasteries, mosques and other cultural landmarks including one, the ancient city of Ohrid, that’s a World Heritage Site. Overlooking a lake that shares its name, it’s a magical place whose ancient alleyways may have been trodden for 3,000 years and are filled with artisans’ shops selling hand-made goods and Ohrid pearls. Enjoy a cultural immersion, then decamp to the lake’s beaches and coves for swimming and sunbathing. For a change of scene, sail across to St Naum Monastery by the Albanian border, then return for lazy evenings and alfresco suppers on the promenade.

Macedonian cuisine is heavily influenced by Turkish and Greek cooking, so expect to find grilled meats, feta, baklava and filo-pastry pies as well as tavche gravche (beans baked in clay pots), lake-caught trout and local wines – vranac is considered the king of Macedonian reds. Make the most of your visit by combining Ohrid with Skopje, the capital that’s almost two cities in one (half Muslim, half Christian) split by the River Vardar.

Less famous, perhaps, than its northern sister Loch Ness, Loch Lomond claims equally fine scenery. Located where the Scottish Lowlands hit the rugged Highlands, what the lake lacks in monsters it makes up for in impressive wildlife from beavers (reintroduced after a 400-year absence) to stags, red squirrels and golden eagles. Protected since 2002 as Loch Lomond & The Trossachs National Park, the area is a playground for outdoor enthusiasts. Hikes along the likes of the Three Lochs Way and other routes are popular, as is biking on the linear West Loch Lomond Cycle Path. There’s culture, too, in the shape of pretty villages of stone-built cottages: Luss on the western shore, Balmaha on the east and Balloch (with its 19th-century castle) down to the south. Luss is also home to Colquhoun’s Restaurant at the Lodge on Loch Lomond. Widely considered one of the area’s best, its menu features local venison, crab and seafood.

Inspired by all that fresh air and good living? Sign up for an activity break to hone your skills in such pastimes as painting, photography and cooking on the bonnie, bonnie banks.

A coastal escape might appear off the agenda in a land-locked country, but Lake Balaton is Hungary’s Riviera. As Central Europe’s largest lake, it’s a magnet for summer sun-seekers and watersports enthusiasts, but it has plenty to offer year round. The southern shore’s sandy plain contrasts with the extinct-volcano-peppered north, where fertile soils provide some of Hungary’s best food and wine. The terroir of the Badacsony region (combined with the lake’s microclimate) is ideal for indigenous kadarka and kéknyelü grapes and familiar varietals such as riesling and pinot noir. The cuisine is rich with local potatoes, paprika, nuts and fruit, while the lake yields carp and pike-perch.

This gentle landscape lends itself to two-wheeled exploring. By breaking a lake tour down into daily distances of 10-50km, it’s possible to potter around the whole thing at a leisurely pace via vineyards, castles and thermal spas – but keep a cycle-free day midway to go wild on Badacsony’s wines.

Perhaps it’s poetic that a volcanic eruption of cataclysmic scale should have created something as lovely as Lake Toba. Southeast Asia’s largest lake fills a Sumatran volcano’s long-extinct crater, with the steep flanks of the caldera rising dramatically all around. At the centre of the lake lies Samosir Island: an Indonesian gem. About the same size as Singapore, it’s home to indigenous Batak people, whose traditional architecture lends a unique sense of place. As well as their huge, wooden buildings with saddle-shaped, palm-thatched roofs, the Batak are known for handicrafts made from wood, bamboo or hand-woven cloth. Pick them up at market stalls in the village of Tomok, then hit sleepy Tuktuk to overnight in its waterfront homestays and hideaways complete with home-cooked meals.

Various villages offer swimming and kayaking, while back on the mainland there are hiking trails for discovering waterfalls, viewpoints and fragrant gardens of cinnamon, coffee or cloves. More challenging is the ascent of Mount Sibayak, a volcano best climbed by starlight so as to reach its summit for sunrise. Afterwards, revive weary muscles in natural hot springs and refuel on typical street foods such as nasi goreng and rendang (you may also notice on the menu, much beloved by the backpacking community, magic mushroom omelettes).

Summer lingers on into October in south-west Turkey, putting a late sunshine escape well within reach. Head off the beaten track to Lake Salda, a couple of hours’ drive inland from Antalya and touted as ‘The Maldives of Turkey’. Its deep blue waters, bone-white sands and forest greens make this lovely lake worth the effort of getting to. Four main beaches flanked by wooded hills draw locals for camping, picnics, swimming, lakeside strolls and bird-watching. The other key thing to do is slather yourself with mud scooped from the shore: it’s known for its health-promoting properties thanks to its magnesium. Beyond a few beach cafés, Lake Salda is fairly low on amenities, although nearby Yeşilova has some typical Turkish restaurants. Book into one of the simple guesthouses around the lake to enjoy the waters before the day-trippers arrive.

Dams on the Colorado River have given the US its two biggest reservoirs: Lake Mead (held back by the Hoover Dam) and Lake Powell, on the border between Arizona and Utah. Flooded by the completion of Glen Canyon Dam in the Sixties, Lake Powell’s convoluted shoreline weaves around canyons and peninsulas for a total of nearly 3,219km, which is longer than America’s west coast. Best visited between May and October, it’s hugely popular for water-based breaks in an otherwise arid land. Beyond swimming, canoeing and kayaking, the best thing to do here is hire a houseboat and spend a few days discovering the lake’s 90-odd flooded canyons.

You’ll want to pull ashore for waterfront dining at Wahweap Marina, whose favoured spots include Driftwood Lounge and the floating Latitude 37. Or venture into Page, the area’s largest town, for cocktails with canyon-edge views at Sunset 89 and, for even more regional flavours, head south to Sedona or Phoenix for a taste of the south-west. Much less well-known than Tex-Mex (with which it shares a focus on corn, beans and squash), south-western cooking celebrates mestizo heritage by blending Hispanic and Navajo influences, with many dishes smothered in sauces made from red or green chillies.

At 3,810 metres above sea level, bright blue Lake Titicaca is the world's highest navigable waterway. Originally plied by indigenous peoples in boats woven from totora reeds, it’s said to be the birthplace of the Inca civilisation and is still inhabited today by the Uros, who build their homes on floating islands. A visit to these reedy isles, although unavoidably touristy, is an essential highlight of a trip to the region, for the glimpse they provide into a unique, age-old way of life.

More authentic still are the Aymara Indian communities on the Llachon Peninsula and the island of Taquile, whose inhabitants live in tiny stone houses. Dressed in brightly coloured traditional clothes and handmade chullo hats, these largely self-sufficient communities grow crops on agricultural terraces that are seemingly as old as the Andes themselves. Join them to sample lake trout, guinea pig, quinoa soup and other homely, comforting dishes, then head back to the Inca capital, Cusco, via the luxury Andean Explorer train.

Plan a trip between April and November to ensure the bluest skies and the best weather, and remember to schedule Lake Titicaca towards the end of your stay, in order to allow your body a chance to acclimatise to the altitude.