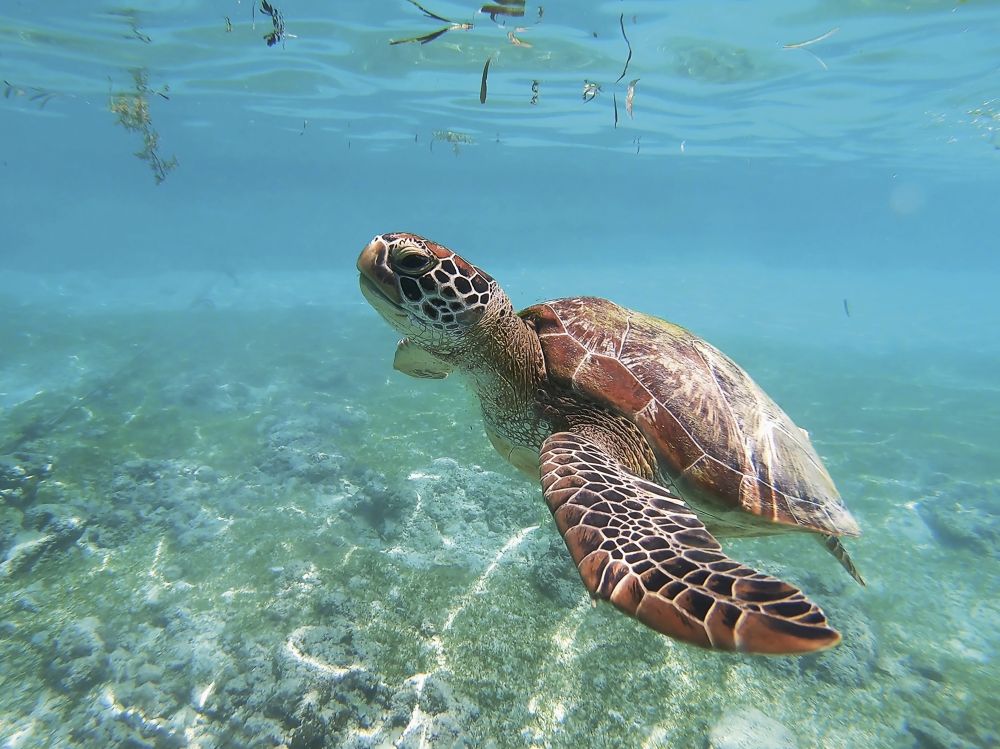 Whether you’re seeking your next challenge or are yet to take the plunge, Jo Davey explores some of the finest underwater playgrounds

The golden rule of scuba diving is ‘don’t hold your breath’, but that’s easier said than done when 635kg of cold, grey tiger shark drifts silently past, a foot from your eyes. Fiji’s Beqa Lagoon might have one of the most pristine, fish-filled reefs on the planet, but it’s the sharks that steal the marine scene. Its 25-29C waters are home to eight species who are more than happy to get up close for the benefit of both snorkellers and divers. Sharks aren’t the only large locals: there are sharp-toothed barracuda, silver and yellow jacks, charmingly blank-faced groupers and, of course, turtles.

Just 10km south of Fiji’s main island Viti Levu, Beqa (pronounced ‘Benga’) is enveloped by one of the biggest barrier reefs in the world. Its 190sq km offer diving depths and snorkelling shallows, which give Fiji its nickname ‘the soft coral capital of the world’. Soft, here, means colour: garnet sea feathers, peach gorgonians, vivid sea fans and the lavender-orange-pinks of strange sea pens. Hidden among this rainbow reef are eels, starfish, octopus and more than 1,000 species of equally colourful fish.

With such multitudes below, it’s no surprise that tables above are filled with seafood. Fiji’s island cuisine is historically influenced by Indian colonial slaves and a small Chinese community. Try popular dishes like kokoda (fish pickled in lime and coconut) and fish suruwa curry, as well as Viti Levu specialities like balolo – sea worms baked in a traditional lovo pit oven. On the mainland, Pacific Harbour is the ideal place for culinary exploration. For local spots, head to the restaurants around the Arts Village; and for fine-dining, try Kanavata at Nanuku Resort, which serves the lagoon’s daily catch.

Few destinations would have you polishing off a tender morsel of smoked wild boar then hunting for hypnotic nudibranchs under the waves just 15 minutes later. Borneo has always been unique, though, and its Tunku Abdul Rahman Marine Park (TAR) is no different. Eight minutes by boat from Malaysian Borneo’s biggest city, Kota Kinabalu, the 50sq km reef of TAR’s five islands is a wonderland of macro life, where rippling anemones and ranching corals hide the entire cast of Finding Nemo. Multiple clownfish swim alongside parrot, rabbit, butterfly and hopping frogfish
and you may become so focused on finding little critters that a well-camouflaged cuttlefish catches you off guard. After all, not everything is small here: the 29C waters are home to blacktip reef sharks, rays, green turtles and the occasional migrating whale shark. And there’s something for everyone: snorkellers can walk straight into resplendent fringing reefs at Pulau Sapi; new divers can seek lionfish, puffers and the rare blue-ringed octopus at Manukan and Mamituk; while experienced divers can explore the newest site, the KM Kuraman wreck, home to ghost pipefish, barracuda and sharks.

Alabaster sands that sink into shades of aqua and cyan, the line between sea and sky broken only by the thatched roofs of floating villas. That’s the Maldives’ USP, but there’s more above and below the surface than meets the sun-blinded eye. Comprising 26 atolls in the Indian Ocean, this is a snorkelling hotspot. Home to five sea turtle and over 2,000 fish species, in Malé you can step off your deck into a glittering garden of sea life. With 15-40m visibility, watch for electric-blue frills of giant clams, oriental sweetlips and spotfin lionfish. Even on ‘bad’ days, poor clarity means plankton, which draw mantas, yellowfin tuna, sharks, whales and dolphins.

Although the Maldives is known for plush resorts where every food need is met, you can also get a taste of tradition in Malé’s warren of street eateries and family-run cafés, where coconut rules the table in dishes of shredded smoked tuna (mas huni), banana flower salad (boshi mashuni) and spicy fish cakes (kulhi boakibaa).

Sandwiched between big-hitters Luzon and Mindanao are the Visayas, whose marine sanctuaries are broken up by islets and inlets of snow-white sands and forest-green palms. At Bohol and Cebu islands, beach snorkelling and dive sites abound, with macro nudibranchs, seahorses, frogfish, jackfish swarms, turtles and whale sharks around Bohol’s corals, while Cebu’s Moalboal is home to the sardine run – an early summer spectacle where the sea turns silver. To the south, Apo is a haven for green sea turtles and Siquijor’s Tubod Marine Sanctuary is the best place to spot clownfish.

Papua New Guinea remains a final frontier, where the wild things roam and few travellers get to tread. Its seas are equally shrouded in mystery, making them a bucket-list adventure for those seeking something less explored. East of the New Guinea mainland are a splatter of islands that trail into the Solomons. Little known New Ireland sits in the Pacific’s coral triangle, and its northern tip is home to Kavieng and Lissenung Island. Tidal currents bring huge shoals of barracuda, as well as Spanish mackerel, dogtooth tuna and reef sharks. Arguably the best residents are the mobula rays that leap from the waters in elegant arcs and fall back down in clumsy splats.

Lissenung’s resort, which runs a turtle nesting programme to protect eggs – since 2013, 15,000 turtles have been released into the ocean – is also gloriously food-focused. Enormous mud crabs are served alongside lobster, octopus, squid and fresh fish. Everything is sustainable, either bought direct from fisherman, local markets or grown in the resort’s garden, and guests eat together at a banquet table, their feet in the sand.

Peaks and promontories draped in deep green, plunging into dark blue depths: the first sighting of Isla del Coco after 36 hours aboard is heart-racing even for the most devoted diver. It may also seem strangely familiar since the island’s wilds were used for filming Jurassic Park. Although dinosaurs are long gone above sea, their contemporaries still lurk beneath the blue. Isla del Coco’s Unesco site, 550km from the mainland, is renowned for its shark population – 14 species have been spotted here, some residents, some migratory: bulls and silkys, white and black tips and even mammoth Galapagos sharks. Come June, elusive whale sharks start to appear, but the show-stealer is the scalloped hammerhead: the island has the largest gathering of these migratory sharks in the world. Watching them swirl, their telltale shadows outlined in the sunlit shallows above, is a diver’s dream. Through 10-30m visibility, you’ll also find marlin, sailfish, pilot whales and bottlenose dolphins across 20 dive sites. It’s little wonder PADI rates the island as one of the best places to scuba dive in the world.