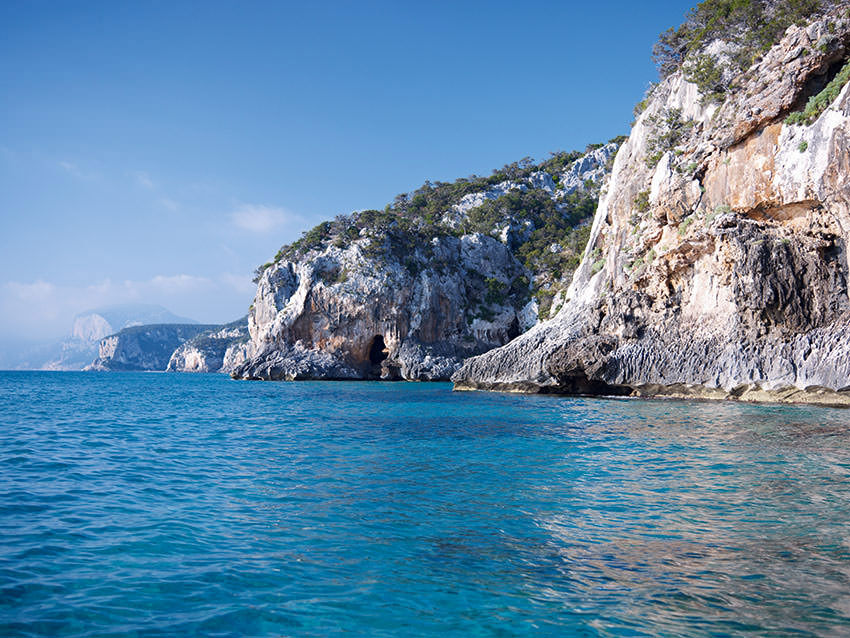 Beyond the Sea - Sardinia

Hotel Costa Dorada Request a room to the rear of the hotel, away from the bustling seafront street, and enjoy exceptional Sardinian food amid a glorious garden. Rooms are spacious and the hotel bar is beautifully furnished. From £46. Lungomare Palmasera 45, Cala Gonone, 00 39 0784 93332, hotelcostadorada.it

Hotel Il Querceto A stunning hotel 8km from Cala Gonone with exceptional pasta and traditional food. This is one of the region’s high-end destinations and has undergone a multi-million pound expansion. From £67. Via Lamarmora 4, Dorgali, 00 39 0784 96509, ilquerceto.com

Hotel Ispinigoli Located a short walk from the other-worldy Ispinigoli caves, this hotel has incredible views across vineyards and olive groves. An outdoor cooking room is used to roast suckling pigs over a fire. From £69. Ispignoli, Nuoro, 00 39 0784 95268, hotelispinigoli.com

Hotel Villa Gustui Maris Located 300m from the sea and 600m from the town, this four-star hotel has comfortable accommodation with stunning views. From £86. Via Marco Polo 57, Cala Gonone, 00 39 0784 920076, villagustuimaris.it

Currency is the euro. Sardinia is one hour ahead of GMT. It has a Mediterranean climate of dry hot summers (May to September) and short, mild winters (November to February).

Sweet Myrtle and Bitter Honey: The Mediterranean Flavours of Sardinia by Efisio Farris (Rizzoli International, £22.50) Homely recipes and memories combine in this informative and beautifully illustrated account of one chef’s early years spent in rural Sardinia.

Prices quoted are the average cost for three courses with half a bottle of wine, unless otherwise stated.

Bue Marino Specialising in fish, this restaurant displays its daily catch in reception. Choose from lobster, sea bream or mora moro (a deep-sea cod) and the chef will cook it for you. From £26. Via Vespucci 8, Cala Gonone, 00 39 0784 920078, hotelbuemarino.it

Hotel L’Oasi The best views and best ‘home-style’ food in town are on offer here. Don’t leave without ordering soft and unctuous amaretti biscuits or frue cheese with tomato served on pane carasu. From £17. Via G Lorca 13, Cala Gonone, 00 39 07849 3111, loasihotel.it

Hotel Miramare High-quality food from one of the region’s best kitchens. Its pasta and seafood are particularly impressive. The fregula in crustacean sauce is a five-star dish. From £26. Piazza Giardini 12, Cala Gonone, 00 39 0784 93140

Sant’ Elene A pastoral paradise high in the hills where authentic food is served amid peaceful surrounds. The traditional dishes are a treat. Ask for casu muchidu but don’t offer to pay, as it’s illegal to sell. From £13. Dorgali, 00 39 0784 94572, hotelsantelene.it

Wait.’ lino ruiu cocks his ear and listens to see if anyone else is on the hillside. ‘the shepherd is tending goats. He says we should continue. Come.’

We’re standing on the scorched earth hills overlooking the Sardinian seaside village of Cala Gonone, in the Nuoro region. lino is taking us to a cuile, a traditional shepherd’s hut. the walk was meant to take 40 minutes, but such is his passion for this gorgeously scenic place that our journey lasts three hours. lino shows us ripe juniper berries; myrtle trees used to make mirto, the local liquor; the wormwood-like herb elicriso, and lentisco, a tree whose berries were used by peasants to make a poor man’s olive oil. He leads us to a well, whose hinterland is pockmarked with the tracks of foxes and the island’s muflone – horned, wild mountain sheep. above us spread the branches of a corbezzolo (wild strawberry) tree, used to create the local bitter honey. lino’s trek takes us back to a time when indigenous shepherds lived self-sufficiently in these hills.

Eventually, the clearing looms into view and we step inside the cuile. lino knows this place well. When he was 12, he came here for five days at Christmas. ‘I slept there,’ he says, pointing to a plank of wood. ‘I ate bread and cheese and fresh milk from the goats.’

Many of the island’s settlers, who travelled from Italy to Sardinia’s eastern seaboard, would have lived in these hills. their simple diet of cheese, bread, vegetables and meat was inextricably linked to the culture of goat herding and farming. to this day, sheeps’ cheeses, pecorino and charcuterie are sold in Sardinia’s supermarkets, reflecting the terrain.

We perch on sawn-off logs as lino produces cheese, sausage and moddizzosu bread from his rucksack. His knife, its handle made from the horn of a muflone, slices into a hunk of locally made pecorino and he shares today’s spoils. ‘I have made cheese in this very cuile. the shepherds made sausage from their animals and bread from orzo (wild barley). the orzo was threshed on a stone circle in the fields and baked.’ lino lifts a plastic bottle of cannonau wine and generously slops it into four plastic cups. ‘Salute,’ he says, proposing a toast. ‘to the way of life, the food of life.’

Soon we’re full. the food is simple and utterly divine. lino tells us about a local organisation, La Pentola delle Idee (the Pot of Ideas), which is reviving such customs and encouraging tourists to experience them. although life has moved on, Sardinia’s little-explored Nuoro region still sings with the uncomplicated, unpretentious and deliciously authentic flavours of the past. traditional dishes like suckling pig, lamb, bread, pasta and abundant aromatic herbs are the culinary palette used by the island’s chefs. dinners at local restaurants resonate with the work of shepherds, cheese- makers, wine producers and fishermen. every aspect of local life is displayed on the plate.

In Cala Gonone we meet brothers alessio and Sebastian Mulas, who epitomise this seaside town. their father, Stanis, pioneered the region’s first hotel in 1952 and taught his now 40-something sons how to cook. ‘My father learned from my grandmother and grandfather,’ says alessio. ‘Grace and francesco taught him everything. In Cala Gonone, almost every restaurant has a hotel attached to it and locals come here to eat. there are very few stand-alone restaurants, if any.’ over successive nights, we enjoy sensational natural flavours at alessio’s Hotel Costa dorada and Sebastian’s Hotel Miramare.

Our dining companion, alessandra Bacchitta, who works for the local hotel collective Cala ’e luna, tells us about the importance of food in daily life: ‘I have six sisters and two brothers and we get together on Sundays at my mother’s for her food; it is the best there is. Some families say the grandfather is a better cook than the mother, but that is not true in my family. My mother is the best.’

Alessio offers us crisp, flat pane carasau as our other dining companion, Massimiliano troncia, president of Cala ’e luna, explains its significance. ‘Shepherds would spend many days in the hills, sometimes 40 or more. they needed food that would last. Pane carasau stays crisp.’

Food follows the seasons. In March and april chefs cook artichokes, while in april and May they make rich, velvety pasta from seagull’s eggs. today, alessio’s culurgiones al pomodoro e basilico are exceptional. the fresh, ravioli-like pasta is silky while the sweet, summery tomatoes have an intensely piquant flavour that reflects the amount of sun lavished upon them.

He offers us grappa infused with juniper. ‘the juniper that is best only grows between 600 and 800 metres on the mountain,’ he explains, ‘so i climb for it. i add a finger-sized stick to the grappa and leave it for three months.’ it has a wonderful brandy colour and delivers a rich afterglow. the slow, steady heat lingers.

At hotel miramare we enjoy fish caught that day. it has been hauled from the mediterranean by fishermen like giuseppe piras. ‘we catch 150kg per day,’ he says. ‘i have done this work for 30 years and it is tough. but the seas are no longer rich. i work from 4.30am until 10pm.’ the boat’s cold store has 40 large polystyrene boxes filled with octopus, squid, prawns and a variety of distinctive, colourful fish. ‘when we go, there will be nobody to replace us,’ explains piras. ‘people have small day boats, but fishing is a dying industry and the village boys will not follow us.’

Though the food of nuoro is little changed, its people have become more organised. co-operatives exist for the farmers and wine producers who make this area famous across the island. the cooperativa dorgali pastori produces a range of cheeses and dairy products with milk from local farms, such as the mild, sheep’s-milk dolmen, serra orrios, cartoe, galanu and pranos, the pecorino- like distintu and tinnias, the ricotta-esque chimeras, goat’s-milk caprabella and montes and the fresh, soft frue.

Among the suppliers to the co-operative are caterina and maria francesca sedda, whose mother, kianna, and father, pielle, own a 49-hectare smallholding. they keep a ram, eight goats (which all have names), and 130 sheep, as well as a cow, a donkey called eleonora and a cat, mussita.

Caterina and maria francesca, both in their 30s, start their day at 5.30am. by 6.30am they have rounded up their flock for milking before cleaning the farmstead, delivering milk, harvesting produce and preparing to re-milk in the afternoon. maria francesca says: ‘we have courgettes, salad leaves, sweetcorn, tomato, grapes, figs, aubergine and fruit from indian cacti. we don’t need to go to the shops – or at least, only for suntan lotion.’

Their produce is bought by restaurants such as ispinigoli, located a stone’s throw from the magical, labyrinthine ispinigoli caves. the stalactite and stalagmite-filled grottos were discovered by shepherds; mesmerising, stately pleasure-domes seemingly fashioned straight from the hallucinogenic pages of coleridge.

Ispinigoli chef giovanni cossu roasts suckling pig for three hours before an open fire, then serves it on a large cork platter hewn from the bark of local trees. this cork avaione was traditionally used as a serving dish by shepherds who would wipe it off and hang it to dry until the next meal. roasting meat has been a Nuoro pastime for centuries and there was a time when locals would feast on mallori de su sabatteri. the elaborate dish, unique to Nuoro, comprised an eviscerated calf stuffed with a goat, which, in turn was stuffed with a suckling pig. the meat was flavoured with indigenous herbs and myrtle. alessandra says: ‘It is historic, though it has not been made for centuries.’

Of course, not all restaurants hark back to century-old traditions. Hotel Il Querceto has undergone a hugely expensive transformation and its kitchens are equipped with state-of-the-art Italian convection ovens. We are ushered into the kitchen to watch mirto being made. this digestif is made by soaking myrtle berries in neat alcohol. they are left to stand for four or more months before being removed and crushed. the liquor from the macerated berries is added to a sugar syrup solution and topped up with the reddened alcohol in which they had been standing. ‘It is like our version of limoncello,’ says Massimiliano, as he passes us a glass.

A short drive away, at Sant’elene, lino is cooking a dinner of his own. Comprising bombedas de poleddu (donkey meatballs) and other Sardinian treats, it echoes the rustic flavours that have been much loved down the centuries. ‘You know about our cheese?’ says lino, conspiratorially, over dinner. ‘It is called casu muchidu.’ the unpasteurised cheese is left to mature in open air and small mosquitoes lay their eggs in it. It is illegal to sell and lino refuses our request to take pictures of it. ‘I will be arrested,’ he says. When he turns away, we help ourselves, spooning it onto a flat bread made from flour, water and pork fat. It has a deliciously intense flavour, one that would have been known by generations of shepherds down the centuries.

Casu muchidu, roast suckling pig, fresh fish and pane carasau are the foodstuffs that have sustained life for centuries in this beautiful part of the world. although tourists often head for the relaxing stretches of beach in Cala gonone, more intrepid food-lovers can find greater thrills in isolated coves or hillside ridges. these are the places that have shaped Sardinian food for centuries.