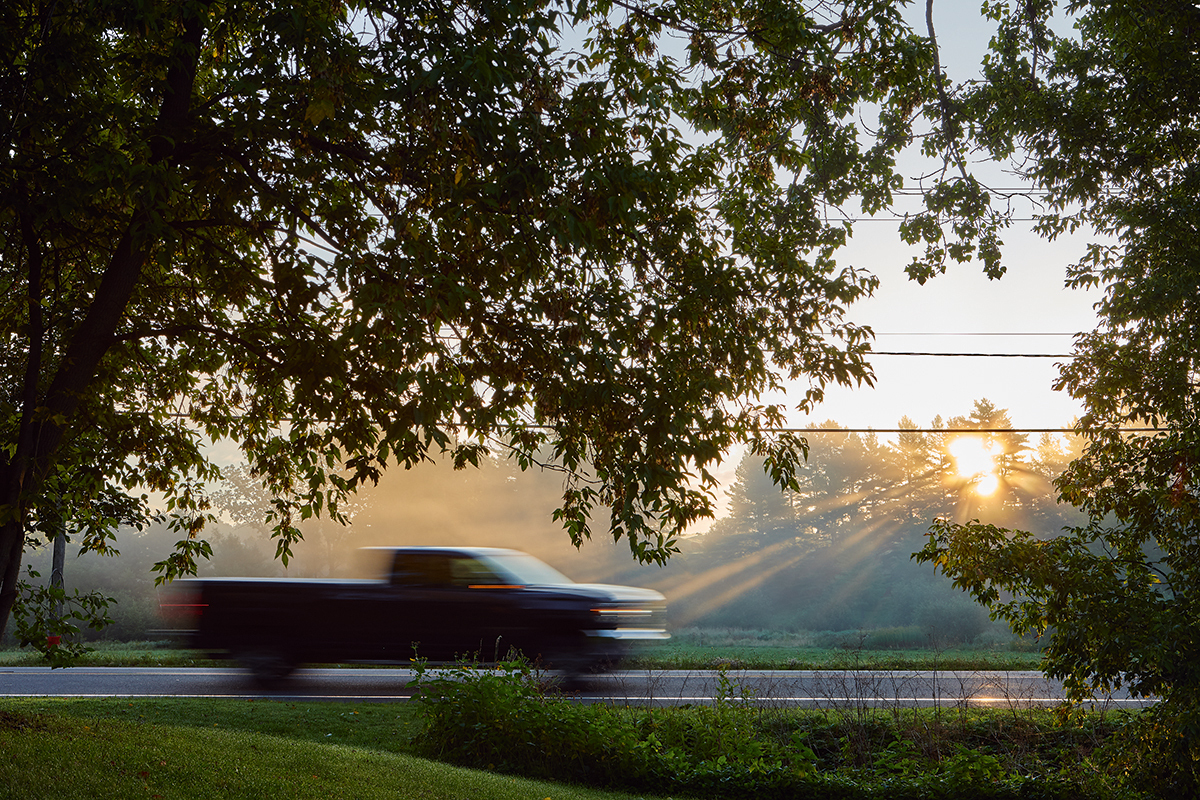 Auberge West Brome Set in a bucolic landscape of rolling, forested hols, lush, green meadows and neat, wood-framed farmhouses, with a rare (and rather splendid) traditional round barn still on the tranquil premises. Breakfast in the attractive dining room includes expertly prepared omelettes, a good selection of cured hams, fruits and freshly made crêpes, while facilities include a pool, sauna and gym. Doubles from £109. 128 Route 139 (West Brome Road), West Brome, JOE 2P0, 00 1 450 266 7552, awb.ca

Hotel Château Bromont Located at the foot of Mount Bromont and the perfect base for this all-seasons paradise for lovers of the outdoors. Private but with plenty of opportunities to socialise and to discover nearby walking and biking trails, wineries and townships. Breakfasts are large, with local bacon, sausages, jams and jellies, croissants, French toast and bagels. Doubles from £81. 90 Rue de Stanstead, Bromont, J2L 1K6, 00 1 450 534 3433, chateaubromont.com

The Eastern Townships are located in south-eastern Québec, Canada, and border on Vermont, Maine and New Hampshire, US. English is the official language of Canada; French, the most spoken in Québec. Currency is the Canadian dollar (CAD). Flight time from the UK to Montréal is 7.5 hours. The Eastern Townships are a further 2 hours by car. Time is 5 hours behind GMT. In May the average high temperature is 17C; the average low, 3C.

GETTING AROUND
Enterprise Rent-a-Car is a good pick for car hire, which makes exploring the region a breeze. 00 1 418 775 3502, enterprise.ca

RESOURCES
Eastern Townships is the region’s website, offering info on the early pioneers, national parks and many route maps. easterntownships.org

Prices are per person for three courses with a half bottle of wine,
unless otherwise stated

Twice a day, his farmer brother, Vincent, sends the milk from his 80 Holstein cows grazing nearby straight to the dairy. ‘It’s still warm, so all I do is add rennet. I mix it for two hours, to separate the curds from the whey, then I transfer the curds to a trough, then press them into moulds. It’s the same technique that’s used to make gruyère cheese.’

Once the curds are set, Simon-Pierre gives the cheeses a saltwater ‘wash’ and leaves them in one of his four humidity rooms, where their varying temperatures will produce cheeses of different characters. ‘Alfred’ is stored on shelves made of regional wood by a local family. ‘This is important for us. The cheeses absorb the aroma of the wood and become “of the place”, and nearby traditional skills become part of our production.’

Compton township is on the Appalachian Plateau, an attractive area of mixed woodland, rolling limestone hills, fish-fertile lakes and valleys of rich grass, herb pasture and fruit orchards. In the late 18th century, the province’s British governor opened it up to settlers. Nearby Hatley was an important stop on the stagecoach route that was once the main link between Québec City and Boston, now a four-hour drive to the south-east. Later, the 19th-century railway brought further benefits to the developing townships. Until the 1850s, when the French, too, began settling here, many residents hoped to (politically) join nearby New England.

It was not to be, but an English love of pies, beef, ham and soups lives on in the home kitchens of this engaging region Victorian-era steamers crisscrossed the larger lakes here, ferrying passengers and goods to the small settlements and imposing estate houses on their shores. One of these, Manoir Hovey, on Lake Massawippi, is now a hotel with elegant lakeside grounds.

‘I love it here,’ says chef de cuisine Alexandre Vachon. ‘I grew up on a working farm before I moved to Montréal, so I feel I’ve come home. I source as much as I can from local farms, and we make birch syrup and vinegar from the trees nearby. I love the seasons: wonderful spring vegetables, summer fish, and the luscious maple syrup.’ In chef Alexandre’s peaceful kitchen his team prepares celery velouté with chanterelles and sweet grass, and duck breast with squash, plums and almond. In the dining room, in an atmosphere reminiscent of a less-hurried past, I enjoy a glass of melodious, sherry-like ice wine.

With long, often severe winters, southern Québec is well suited to producing ice wine. It’s made from grapes (riesling, vidal, cabernet franc) that have frozen while still on the vine, a process that encourages a concentrated juice to develop before fermentation. The same climatic conditions are perfect for making ice cider.

Eighty kilometres south-west of Lake Massawippi and a few kilometres north of the Vermont (US) border, Louise Dupuis and Christian Barthomeuf, owners of Clos Saragnat, make ice cider by leaving the apples to freeze on their 42 varieties of apple trees – English, French and grafted, locally sourced ones. These are trees that Christian has sought out on long-abandoned land, now forest, that was once farmed by early settlers, or that have a much earlier, unknown pedigree. ‘I harvest the apples in January, then immediately press them through straw, which takes around 12 hours,’ Christian explains, ‘and I check that the temperature never goes above -10C, as this is when the sugar separates out.’ He stores the juice in huge, clear jars outside in the late-April sun, where they’re left until November, when he bottles it. By this time, slow fermentation has produced a stable, deep-amber juice of 11 per cent alcohol that is unaffected by oxygen.

‘We have never sprayed our apples,’ says Christian, as we stroll through his delightfully wild orchard. ‘We let the land tell us what to do. The trees’ undergrowth supports a huge variety of insects and birds.’ Passing through swathes of waist-high goldenrod and pretty, aromatic wild marjoram, Christian gathers up some apples, including his idiosyncratic, deep-red ‘Freedom’ varietal, and tells their stories. ‘I don’t prune them once they are a couple of years old. As I plant the trees that I graft from forests among wild flowers, there’s a lot of competition for the land. If the young tree survives, it becomes very strong. My inspiration is the tropical rainforest.’ Christian uses a similar technique – where the juice is affected by straw – to make wine. ‘It’s a method they use in Jura, in France,’ he explains. As we pass his vines growing on a south-facing slope. I notice the netting. ‘Yes, I’m afraid the birds and small game are the one disadvantage to encouraging the wildlife here.’ His smile is rueful. ‘I pick the grapes – my favourite is muscat – in early October and store them inside in (plastic-imitating) straw baskets as, in our climate, they won’t dry outside.’ Christian and Louise started making straw wine for practical reasons. ‘There’s only two of us, and we can stretch the work over several weeks. Whereas ice cider and ice wine (which they also make) depend entirely on climatic temperature. When it reaches the right point, the work has to be done immediately or the year’s crop is lost.’

Eve Rainville, winemaker at Domaine Bergeville, near Hatley, respects the cool local climate, too: ‘It produces high acidity levels in our grapes. As we love sparkling wine, this is where we’ve decided to make it,’ she explains, while we walk in the 3ha vineyard. ‘Much research has been done on grapes that can survive here in the north, and there have been many mistakes made. Immigrants brought their own varietals. These didn’t survive the harsh winters at first, but now they have adapted, often through grafting with native varietals.’ Wine history shaped this area. ‘A 16th-century French explorer, arriving at the mouth of the St Lawrence river, found an island covered in wild grape vines.’ It’s said that the explorer, Jacques Cartier, named this island, perhaps hopefully, Île du Bacchus (now renamed Île d’Orléans).

The grape-growing season here is short. ‘The European vineyard has a seven-to-eight-month cycle, Québec, a four-month one, so we do eight months squashed up,’ explains Eve. ‘Spring was late this year, and unusually cool and wet, so our pruning was delayed as we can only do it once the snow has gone. We had to do it very fast.’ Winemakers here have other problems, too. ‘At least half the grapes a Québec winemaker uses must be their own-grown, and they need to maintain their own presses. Québec people have always been masters of many trades – the long winters have made sure of that – and it’s become a trademark of its winemakers.’

Oak trees once covered this region but were cut down, first by the British, to build churches, then, later, by the French, to build boats. Today, its untamed forests are roamed by boar, and the rivers and meadows, home to an abundance of geese, ducks and stout, noisy wild turkeys. Bronze, shaggy-haired, long-horned Highland beef cattle graze the sloping, fertile fields and behind them, the hillsides are dotted with painted, wooden-slatted farmhouses and large barns. At nearby roadside stalls, farms sell their produce – green beans, plums, potatoes, tomatoes, pears, tiny black grapes and mounds of squash, all shapes and sizes; honey, from buckwheat, wildflowers and apple blossom; maple syrup; homemade pickles of beetroot, cucumber and peppers; and the pretty cerises de terre (ground cherries), which are traditionally turned into jellies and sweet or savoury pies.

Early one misty morning I find a man collecting small, scarlet berries from a bush on the lakeshore. 'They're pimberries,' he explains, 'my mother mad many dishes with them. My favourite was her pie.' Like t ehoneyberry (blue honeysuckle), elderflower and cranberry, the pimberry (squashberry, family Adoxaxeae) is native to this part of the Americas. Well known to First Nations people and the pioneers, these tastes of the past are no regaining popularity.

'It was the people of First Nations who taught early settlers who to tape the maple trees for their sap – that's why it used to be called Indian molasses.' André Pollender, skilled, fifth-generation maple syrup producer at Cabana à Sucre du Pic Bois, in Brigham, shows me how it's done. 'YOu have a three-week window in which to put the pegs in the trees, usually between 10 March and 16 April. The right moment is when the nighttime temperature is -5C; daytime, 5C above. It's all to do with the pressure that's created between the trunk and the branches by the thaw.' During the season, André collects around 5,000 litres daily. 'We boil the syrup 24 hours a day in the sugar shack.'

Maple syrup was used by incomers to replace sugar, 'but now we know that it has far more value,' André explains. 'It can be rich in zin, iron, calcium and antioxidants – 64 have been discovered, five of them unique to maple. The syrup's flavour depends on the three's location (better from upper slopes), its age, the point in the season we collect it and its preparation.' A maple tree is 45 to 50 years old before it produces sap. 'My oldest is 270 years old, but I respect it, so I don't collect its sap. Three men can hold hands around it. The average age of my producing trees is 225 years and all are wild.'

Sap-gathering is a time of great excitement and arduous work in harsh climate conditions. Like women before her, André's wife, Danielle, is skilled in syrup production and also in cooking, for she provides the hungry sap-gatherers' meals. While the early settlers' survival depended on hard work and, often, the invaluable local knowledge of the First Nations people, their cuisine relied on pioneering women adapting their culinary skills to their new home, creating delicious pies from the native pies, fruits and game, and making the meat of a slaughtered pig last through the long winter.

In this region of charming townships, forests, neat vineyards and bountiful orchards, local Québécois proudly that us to their beloved traditional flavours – boudin, poutine and tourtière (pie). But now, alongside, we can also enjoy their new, innovative dishes made with the fine produce of their fertile valleys and enchanting hills.

This feature was taken from the May 2020 issue of Food and Travel.