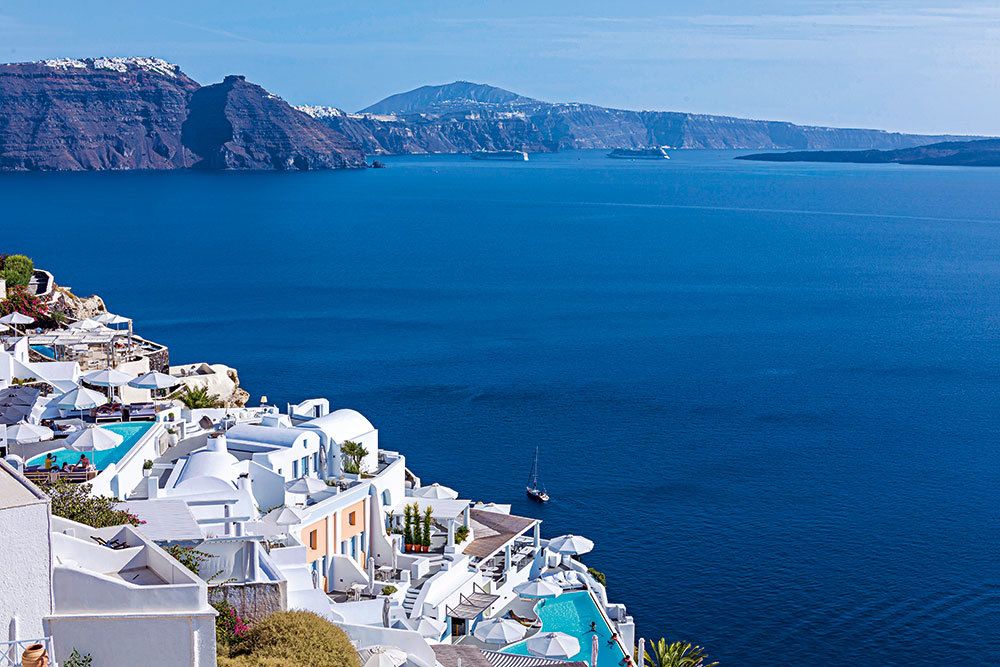 Some of the best hotels in the world are built into the rocks. Take a room in a millennia-old cliff face and make your own Paleolithic discovery, says Imogen Lepere .

Famed for picturesque villages, staggering sunsets and dramatic cliffs plunging 1,000 feet to the inky caldera, Santorini is widely recognised as one of the most beautiful places in the world. Oia was once a humble village clinging to the highest point of the island but its views have resulted in its transformation into a high-end destination for fine dining and exclusive hideaways. Katikies Hotel is the most luxurious of them all; its gleaming suites nestling in natural hollows in the Cycladic rock. Enjoy a chilled glass of assyrtiko (zesty Santorini wine) in the Jacuzzi on your private veranda or bask in one of the three infinity pools that stretch towards the horizon. Oia has maintained much of its traditional charm, with winding pedestrian streets leading to olive-shaded squares and blue-domed churches. Hail a donkey (the islanders’ transport of choice) to carry you down the cobbled steps to Ammoudi Bay. There are several low-key tavernas where you can tuck into creamy fava beans laced with lemon juice and capers, fresh squid or the iced coffee which is so beloved of local fishermen. Follow the rugged path until you reach the tiny chapel on the ocean’s edge. It may not be a conventional beach but the crystal water guarantees some of the best swimming in Greece. For dinner with a view try Katikies’ rooftop restaurant which serves sensational seafood under the stars.

For centuries, the Loire Valley was a playground for French Kings and their decadent courts, a realm of pleasure gardens and fairy- tale castles. The royal palace, Château de Chambord, survived the French Revolution and is staggering in its scale and grace, with elaborate towers and a staircase thought to have been designed by Leonardo Da Vinci. Les Hautes Roches is rather more intimate. Part 18th-century manor house, part medieval monastery, 12 of its 14 rooms are carved into velvety tufa rock. Right on the banks of the Loire river, all have views over the lush valley and famous Vouvray vineyards. The region is peppered with caves and their consistently cool temperatures make for ideal wine cellars. Enjoy a subterranean tasting class before emerging into the sunshine for an afternoon spent drifting downstream on a river cruise. If boating isn’t your thing, pack a basket of charcuterie and wander the idyllic countryside on foot. Orchids and a rare species of buttercup grow in the shade of willow trees, while thin-legged herons wade the sandy shallows of the riverbank. The hotel’s garden restaurant serves classic French cuisine by Michelin-starred chef Didier Edon. Order lobster with local wine and celery for a delectable taste of the region.

Once synonymous with extreme poverty, the Abruzzo region is enjoying a renaissance and the cave town of Matera is leading the charge. Built on a plateau above a jagged gorge it has dramatic views over the limestone-studded Murgia National Park, as well as cave dwellings dating back to Paleolithic times. Not-for-profit collective Sextantio Project have bought 17,000 villages in the area with the aim of preserving the heritage of these ancient mountain communities. Sextantio le Grotte has been painstakingly restored and offers a strain of luxury that is truly unique. The walls and floors of its 18 rooms are bare stone and the furniture consists of beautifully chosen relics found in abandoned caves; the bed linen is an ancient wedding trousseau, the dressing table a milking stool. Electricity is minimal and in the evenings each room is filled with candles and scented with aromatic herbs. Many locals still live off the land and the food scene is unpretentious yet flavoursome, with figs, chicory and ricotta all playing their part. Spend the day sketching at local farms or exploring the area’s abandoned villages by mountain bike. When dusk falls, dine in a rock church (organised by the hotel) before delving into the labyrinthine town by candlelight.

There is a rule in Negril that no hotel can be built higher than the tallest palm tree, so finding accommodation on raised ground is the key to bagging the best view. High on a cliff honeycombed with secret passageways, The Caves is one of the only hotels in the world where you can dive from your balcony into the ocean. While away the days with snorkelling expeditions to sea caverns, massages in the cave spa or snacking on Caribbean favourites like succulent jerk shrimp. Sunset is even more sensational when accompanied by the signature cocktail at the cave bar –watermelon, ginger and Blackwell rum on the rocks. Negril is defintiely worth a visit after dark with a vibrant streetfood and reggae scene. Best in the West Jerk Stand is often named the top street food vendor on the island. For a more formal approach, the hotel’s restaurant is hard to beat – private dining in candle-filled grottos halfway down the cliff.

A great Ndebele king named Mzilikazi fondly dubbed this swathe of his kingdom Matobo, meaning ‘bald heads’ – and with thousands of granite domes rising dramatically above the forests it’s easy to see why. However, words can’t convey the majesty of this world heritage site, a land of vast boulders and hidden pools, the last stronghold of the white rhino in Zimbabwe and home to local tribes for 40,000 years. Big Cave Camp perches atop a granite whaleback with sensational views over Matobo National Park (which has one of the world’s most concentrated leopard populations). The walls of its seven suites are made of local stone, but the main troglodyte feature is the Leopard’s Lair, a cave bar and lounge built under a 20-metre boulder. With 2,000 acres of private wilderness there are countless activities on offer. Swimming in natural rock pools, night safaris and tours of ancient cave art are a few of our favourites.

‘Bizarre’ is the first word that springs to mind when looking over the moonscape of Cappadocia from a hot-air balloon. ‘Beautiful’ is the second. It is a land of conical outcrops and mushroom-like fairy chimneys riddled with Bronze-Age troglodyte dwellings and underground cities. Thousands of tiny vineyards feed off the fertile volcanic soil and boundless sunshine, yielding wine that is deservedly winning international acclaim. Argos in Cappadocia produces Kalecik Karası, a deliciously drinkable red best enjoyed in one of the hotel’s many gardens. Located at the foot of the ancient fortress Uçhisar (the highest point in Cappadocia), it has sweeping views over the other-worldly Güvercinlik Valley. The hotel is an exquisite fusion of six restored mansion houses and caves connected by networks of underground tunnels. The Splendid Suites are deep enough to house private swimming pools.