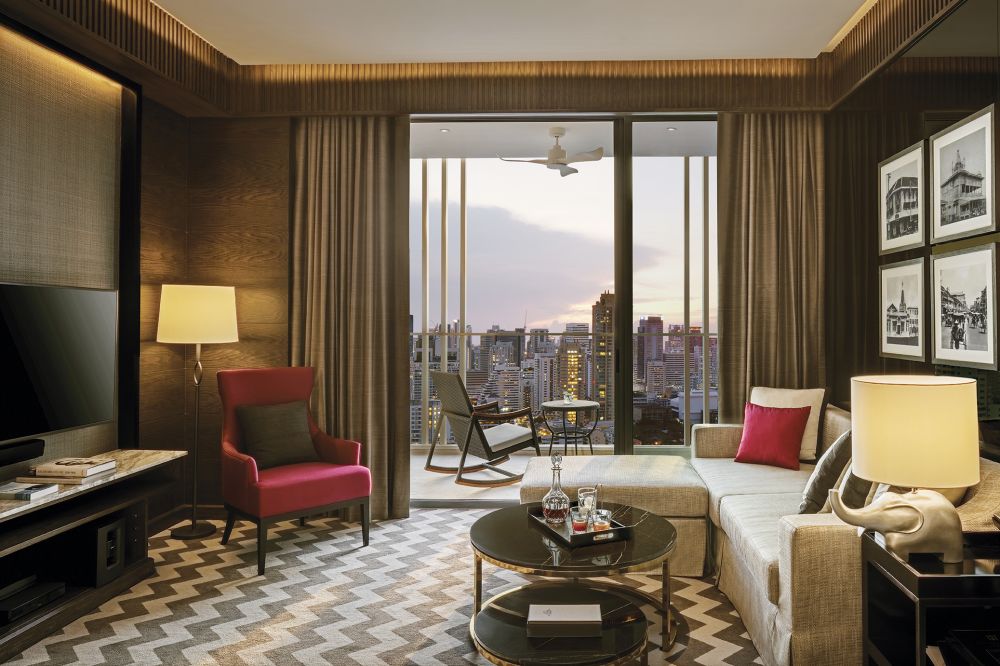 Choose the right stay en route to your destination and the stopover experience can be one of the highlights of your trip. James Litston picks some of the best, with so much going on you’ll want to linger to the very last minute

If your layover in Vietnam’s largest city is but brief, An Lam Retreats Saigon River is the perfect place to lay your head. Combining an urban location with a hint of rainforest leafiness, it’s a best-of-both-worlds sanctuary that embraces the best of this vibrant nation. It’s only 25 minutes by speedboat from the city centre, but the tranquil garden setting makes it feel a world away. Accommodation takes the form of 38 luxurious villas and suites. Brimming with traditional touches, they offer a sense of place thanks to the generous use of granite, rattan, colourful silks and other local materials. Days can be spent lazing poolside or on private terraces, enjoying the shade of banyan and banana trees; or sign up for a sunset river cruise, cooking classes or treatments in the Jungle Spa before tucking into supper at the riverfront restaurant.

Convenience is key on a stopover, which is why The Old Clare trumps Sydney’s many other chic hotels. Just a two-minute walk from Central Station (itself only 20 minutes by train from the airport), the 62-room property occupies two heritage buildings that are harmoniously united via a three-storey atrium. The renovation on both buildings – an art deco pub and Victorian brewery – has preserved original features and acres of brickwork, so rooms have stacks of personality, with high ceilings and eucalyptus-wood floors. The once ‘daggy’ student pub downstairs is reborn as a designer bar and there’s decent on-site dining at Automata, which focuses on local ingredients. Or pop round the corner to Spice Alley, a lantern-lit, hawker-style ‘eat street’ where most dishes cost under £10 each, remarkable in a city where dining out can be pricey.

Size and scale risk making Tokyo feel overwhelming, so the secret of successful city breaks is location, location, location. Step forward K5, a design hotel in Kabutocho: the old financial district that’s taken on a new, more contemporary guise thanks to an influx of co-working spaces, craft beer and cool clothing stores. Located a few blocks from Tokyo Station (easily reached in just over half an hour from Haneda Airport, or twice that from Narita), K5 occupies a former bank within walking distance of cultural Eastern Tokyo and some of the city’s best shopping in Ginza and Nihombashi. The 20 generously sized rooms are a blend of Swedish minimalism and Japanese design, featuring concrete, cedar wood, custom-made furniture and an abundance of greenery that softens the hotel’s industrial, urban edge. It’s an ideal base from which to immerse yourself in Tokyo style.

En route to see orangutans in Borneo, or a beach break in Langkawi? Mix things up by adding a stay in KL’s urban jungle. Beyond must-see skyline icons such as Petronas Twin Towers, Kuala Lumpur shines for its shopping and dining. Seek out colourful street life and hawker centres in the Little India and Brickfields districts, then retreat to the serenity of KLoé. This centrally sited boutique hotel is a hit for its compact but stylish rooms; or upgrade to one of the five Artist Lofts, each with an individual twist (Room to Grow, packed with houseplants, is our favourite). An open-air pool in the courtyard is a fine spot for taking things easy between bouts of shopping in Bukit Bintang or bar-hopping in Changkat (both a walk away). Too much effort? Then simply pop downstairs to Lucky Coffee Bar for a hot brew and an artisanal sandwich, or Monroe, an American-style diner.

Santa Teresa may not be the obvious district to stay in when visiting Rio, but this hilltop neighbourhood close to the city centre is a gem. Comfortably bohemian, it’s the perfect setting for a Mama Shelter: the playfully retro, French mini-chain of design-on-a-budget hotels. Short on facilities but big on style, it’s home to 55 simply furnished rooms and a fun, tropicana theme. The terrace and restaurant are a hit, but it’s an easy hop to Centro on a yellow tram to seek further choice. Among its opulent public buildings, faded shop-fronts and modernist masterpieces, don’t miss Confeitaria Colombo (a patisserie that’s drawn crowds for nearly 130 years); or jump on the metro to soak up the sun on Ipanema Beach.

With all the fuss around Hollywood and the fancy shops on Rodeo Drive, high-rise Downtown LA gets overlooked. These days, this is a crime, because Downtown is packed with splendid architecture and has undergone a huge renaissance over the past 20 years. Among its art deco and beaux-arts skyscrapers stands the historic Commercial Exchange (complete with vintage, neon blade sign): a suitable location for the swish Freehand Los Angeles. With a rooftop pool and two cocktail bars – one in the lobby, one up on the deck – this hotel/hostel hybrid is a fun and funky hangout. Rooms span a spectrum from show-off suites to studios and king-size bedrooms, plus dorm-style accommodation for those saving their cash for their final destination. It’s handily accessible too: around half an hour from the airport by cab, of course, this being LA, dependent on traffic.

With a name that means ‘peace and tranquility’ in the local Malay language, it’s no surprise that Sentosa is where Singaporeans come to relax. Quiet retreats, man-made beaches and big-name, family attractions await; and they’re all within easy reach of the W. Set back from the throng in a laid-back, residential community, the island resort has futuristic interiors and neon-bright, garden-inspired installations that embody Singapore’s blend of old-meets-new. Sentosa’s three beaches are near at hand – Siloso is liveliest, while Tanjong is more laid-back – and a beach break here can be easily spiced up with dashes into the city. Hit Orchard Road for its glut of high-end shopping and dining options; then go downtown for cocktails at Raffles, and on to the famed hawker centres to sample the world’s only Michelin-starred street food, a steal at under £5 per dish.

From its art-filled, black marble lobby all the way up to its rooftop infinity pool, Bangkok’s 137 Pillars is an arbiter of Asian luxe. Although small – the room count reaches just over 30 – this boutique property packs a punch with its generous inclusions, first-rate facilities and round-the-clock butler service. It’s located in upmarket Phrom Phong, a residential neighbourhood within easy reach of all the central attractions, making it an indulgent address for your short stay in the city. Fine dining comes in the form of flagship restaurant, Nimitr, which is smartly dressed in cobalt and gold and offers skyline views from the 27th floor. Equally lofty is sophisticated Jack Bain’s Bar, although the panorama over breakfast at Baan Borneo Club one floor down is no less impressive.

With a global network connecting the likes of the Maldives, Mauritius and Melbourne, Qatar Airways passengers can add a desert stay to any itinerary. Among Doha’s many high-end hotels, the Mondrian brings a sense of California cool to the West Bay business district. The luxury property occupies a landmark building within a forest of towering neon fronting the Persian Gulf. Design-forward rooms are dressed in dazzling white and touches of bling, with Arabic horses and script among local references on feature walls. For further brushes with authenticity, head along the Corniche waterfront to the Museum of Islamic Art, its collection spanning 14,000 years of history), then browse Souq Waqif for gold, rugs, herbs, and knick-knacks.

There’s no shortage of luxury hotels in Dubai for a comfortable stopover, but for something with a bit more edge, make a beeline for 25hours. Squarely aimed at fashionable types for whom 24 hours a day aren’t enough, this hip hotel does things a little differently. It’s home to Dubai’s first mixed-use rooftop sauna, open-air fitness classes and a choice of five bars and restaurants, whose offer spans northern India to Bavaria, in a nod to the brand’s German roots. Light, bright rooms have rainfall showers and playful design elements that reference the region’s Bedouin traditions. Outside is the architecturally stunning Museum of the Future, while Downtown Dubai is within peddling distance on one of the hotel’s fleet of e-bikes.

If you’ve been to Istanbul before and are not too worried about trekking across town to see the Blue Mosque’s pencil-thin minarets or the bustling Grand Bazaar, then this hideaway on the Bosphorus could be the relaxing haven you need. Carved into a pair of historic and beautifully renovated mansions, this sumptuous sanctuary is as grand as any sultan’s palace of old. The Six Senses Spa offers a blend of eastern and western wellness traditions, while the guest rooms – all pastel shades, studded leather upholstery and gilt-framed artworks – reflect the buildings’ heritage, which hails from the days of the Ottoman Empire. Dining options include modern Turkish at Avlu Restaurant, with tables in a leafy courtyard. For a real treat, book into one of the Bosphorus-facing rooms to watch the city lights glinting on the water from the Asian side of the strait.

The CN Tower, Theatre District and Downtown Toronto’s other attractions are all within walking distance of this sustainability- minded hotel. Reclaimed wood, glacier-carved stone and thousands of potted plants bring a hint of the Canadian wilderness to this most urban of locations; but that’s not to say it’s the least bit rustic. White and grey tones, mid-century seating and modern art installations ensure the guest experience is thoroughly contemporary. There’s a rooftop pool – a Toronto rarity – and an excellent restaurant, 1 Kitchen, whose all-local ethos extends to using produce from the hotel’s own organic garden. In the rooms, floor-to-ceiling windows frame the high-rise skyline; and even the furniture is made from fallen local trees, each piece stamped with the wood’s provenance.

You don’t have to go very far to sightsee when staying at Mexico City’s Four Seasons. Set on central avenue Paseo de la Reforma, it’s just steps away from the landmark Angel of Independence statue and a five-minute walk from Bosque de Chapultepec: a vast, leafy park that’s home to the Anthropology Museum. Tour its astonishing collection of Aztec artefacts, which includes a stunning replica of the emperor Moctezuma’s feathered headdress; then head back to the hotel to relax at the spa. Make sure you stay until Sunday, when the normally traffic-choked Paseo becomes a pedestrian zone. Enjoy it on foot or bicycle, then escape the bustle in the hotel’s courtyard garden, where Zanaya restaurant serves one of Mexico City’s best brunches along with bottomless fizz.