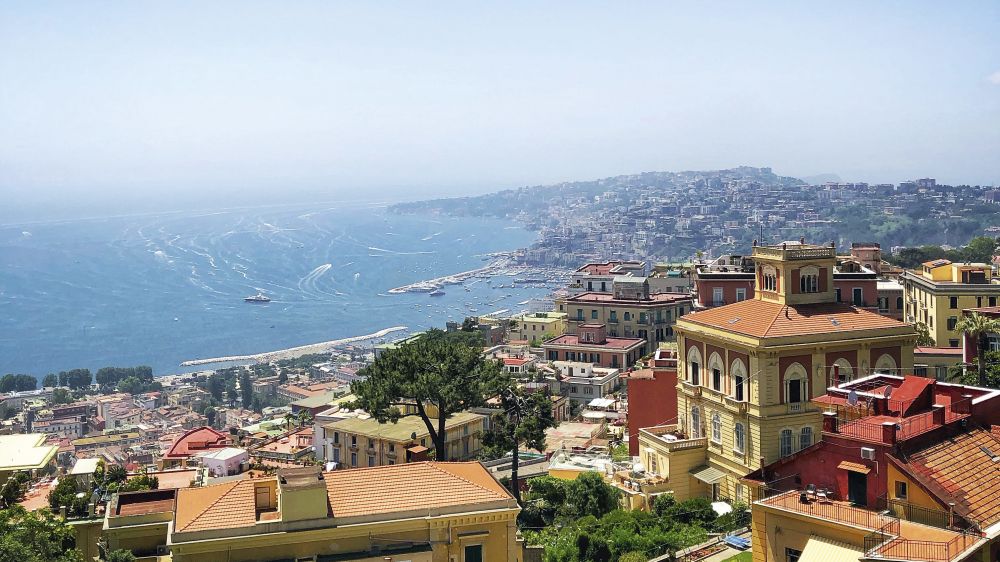 Head for the sun and enjoy the best sandy shores and stunning coasts without compromising on quality, authentic cuisine. Ben McCormack rounds up the best destinations for next-level gastronomy on the water’s edge

Famous for a holy trinity of wine, olive oil and white truffles, Croatia’s north-western province of Istria offers exceptional dining at a fraction of the price you’d pay across the Adriatic in Italy.

The elegant city of Pula is home to a Roman amphitheatre, whose museum contains displays of amphorae once used to store oil, wine and the fermented fish sauce of garum – proof that the Istrians’ love of food predates the current generation of young chefs passionate about promoting the produce of their homeland.

You’ll find Pula’s covered market in a tree-lined square on the other side of the compact city centre. Here, you might bump into chef Damir Modrušan shopping for ingredients for Restaurant Zigante – although given that owner Giancarlo Zigante is a former truffle hunter whose dog sniffed out the biggest white truffle ever found, it’s tubers from the hills inland that are the stars of his menu. Just 50m from the amphitheatre, you can sample another local speciality at the House of Istrian Olive Oil oleumhistriae.com which offers oil from 25 top producers to try before you buy.

The city and surrounding coast is naturally the place to sample the 400 species of fish and seafood swimming in the Adriatic Sea that surrounds the Istrian peninsula. Just out of town, at Konoba Batelina, chef David Skoko serves the catch caught that morning by his fisherman father Danilo, grilled with olive oil over an open fire. Widely regarded as the best seafood in the area, if not the whole of Croatia, Anthony Bourdain was a fan.

The baroque jewel of Rovinj, up the coast, is home to Istria’s duo of Michelin-starred restaurants, Agli Amici Rovinj maistra.com and Monte. For something less fancy, La Puntulina puntulina.eu has tables on a terrace built into a rocky outcrop by the water’s edge and a menu of fish baked in an olive crust or simply grilled.

Continuing north, there are more, pretty seaside towns such as Novigrad, but the big draw the closer you get to the Slovenian border is the Istrian Wine Trail. Degrassi winery is a good place to start. Founder Moreno Degrassi has been making wine in Istria since the mid-1990s and his 21 hectares of vineyards produce aromatic, intense wines such as viognier and malvasia. A tasting at the vineyard can be followed by a visit to the nearby village of Savudrija to admire the Adriatic’s oldest working lighthouse.

Marseille and the Calanques France

France’s second-biggest city has far too often been overlooked in favour of Paris and Lyon on the food front, but those in the know think different. Marseille has shifted from decades-old notoriety to become instead a hotbed of creatives (and creative chefs) priced out of Paris, carving their own niche on the French scene.

Its reputation as number one when it comes to bouillabaisse, however, has never been in dispute, and the Vieux Port, where a fish market is held every morning, is lined with harbourside restaurants claiming to serve the best seafood stew in the city. Most are over-priced tourist traps, but follow the Corniche round to Le Petit Nice-Passedat and it’s an altogether different picture.

This Relais & Chateaux hotel, with stunning views across the water to the Château d’If, is home to a three-Michelin-starred dining room where chef Gérald Passedat serves his ‘Bouille Abaisse’, deconstructed over three beautifully presented courses as seashell carpaccio, fish and lobster in a heady saffron broth, and a trio of fish cooked whole with fish soup.

A southern city of this size can feel oppressive in summer, but you don’t have to go far to feel some fresh air. In the south of the city, look for Bricoleurs de Douceurs bricoleursdedoucers.fr a patisserie from talented young baker Clément Higgins, whose daily selection of pastries, tarts and gateaux make a sweet feast to take away and eat on the Plage du Prophète, a short saunter downhill.

The most famous stretch of coastline close to Marseille is the Calanques, 20km of limestone cliffs towering above shimmering coves. There are boat trips from the Vieux Port, but better to hire a car, pull on your hiking boots and admire the views alone from on high before scrambling down for a swim in the azure water.

You’ll want to smarten up for a lunch at La Villa Madie – recently elevated to three-Michelin-starred status, it sits overlooking the Med on a pine-covered cliff above Cassis. Then perhaps take a wander around the town’s improbably photogenic, café-lined harbour to soak up the atmosphere.

The most elegant whites in the south of France are produced in a dozen wineries on the outskirts of Cassis and many are open to the public. The vineyards of Clos-Ste-Magdeleine clossaintemagdeleine.fr plunge down to the sea and tastings are held in a beautiful art deco villa; pick up a bottle of its AOC Cassis Blanc to take down to the pebbly beach of Anse de l’Arène below and drink in the view along the coast to Cap Canaille, the highest sea cliff in France.

Naples and the Amalfi coast Italy

The capital of Campania has long been the jumping-off point for the jewels of the Amalfi Coast but Italy’s third-largest city is fast becoming an attraction in its own right. Food is the top reason to visit Naples, though the city itself has been spruced up and traffic is banned from the seafront and much of the centre.

Pizza is the dish indelibly associated with Naples. Legend has it that pizza Margherita was invented here in 1889 to honour the visit of Queen Margherita, who chose the tomato, basil and mozzarella-topped pizza because it reflected the red, green and white of the Italian flag. The choice of pizzerias in Naples is overwhelming, but most locals would recommend Starita in the defiantly untouristy Materdei neighbourhood, where since 1901 Neapolitans have been happy to queue for the crispy house special montanara pizza, topped with tomato, basil and smoked provola cheese.

Unlike Naples, the Amalfi Coast has never needed scrubbing up to look pretty as a postcard. No visit would be complete without indulging in some of the ice cream that comes in an array of pastel colours that mirror the palette of the seaside towns. La Gelateria Buca di Bacco bucapositano.it by the beach at Positano, serves gelati in local flavours; try the sfogliatella, inspired by the creamy shell-shaped pastries that are a speciality of Campania.

For a proper meal, Torre Normanna has an absolutely jaw-dropping location in the hills above Minori. The restaurant is run by four brothers, with ingredients grown in their on-site garden, sourced from local farms and fished out of the sea – like citrus-marinated amberjack carpaccio with herbs, sprouts and almonds – while the own-label white wine is made from falanghina and biancolella grapes grown by Ettore Sammarco in nearby Ravello.

The Campanian Archipelago includes the islands of jet-set Capri, rustic Ischia and tiny Procida, where the ramshackle 17th-century fishing village was used as a location for the late Nineties film The Talented Mr Ripley and still feels like the Fifties. Rough-diamond Procida is the grit in the oyster of the Bay of Naples, where fishing nets are still piled on to crumbling quaysides and locals suspiciously eye the aperitivo bars and boutiques that are popping up since the island was named as Italy’s capital of culture for 2022.

Food specialities include lingue di Procida, the cream-filled puff pastries flavoured with the island’s sweet lemons, and nespolino, a bitter liqueur made with loquat seeds. And don’t miss a supper of spaghetti jumbled with fat local mussels and lemon pesto at Ristorante Da Girone, while a spectacular sunset sets fire to the sky behind Ischia over the rippling water.

Alacati and the Cesme Peninsula Turkey

Dubbed the new Bodrum, the Aegean fishing village of Alaçatı has become the weekend destination of smart Turks not only from nearby Izmir but also Istanbul. Art galleries and antique shops fill the old centre of blue-shuttered, whitewashed houses – Alaçatı was settled by Greeks in the 19th century and the centre is a dead ringer for Mykonos – but you’re still just as likely to happen upon an impromptu fish auction as pricey Turkish artefacts hidden behind a barn-like door.

You could spend a day simply eating your way through the winding streets: crescents of warm bread from a bakery for breakfast, freshly fried doughnuts from a stall set up to catch the mosque emptying at lunchtime, a handful or two of lemon-steamed mussels from a street vendor come the evening.

But the arrival of those smart city-dwellers has brought some smart restaurants. Köşe Kahve is a chic corner spot from which to watch the comings and goings of village life from a wrought-iron chair on the cobbled street outside. Alaçatı’s most respected restaurant is Asma Yaprağı (‘The Vine Leaf’), which manages to be both rustic and refined. Chef-owner Ayşe Nur Mıhçı shops at the local market and forages for herbs in the hills around Alaçatı to create dishes that she learned from her aunt, such as braised artichoke topped with samphire. Visitors walk through the restaurant’s family-style kitchen to reach an outside seating area shaded by a canopy of vine leaves.

Many Alaçatı restaurants serve wine from the local Urlice Vineyards, where husband and wife Reha and Bilge Bengisu Öğünlü offer their organically grown wine to sample in the tasting room of the house they renovated on the edge of the estate. You’ll need a car (or taxi) to get to the vineyard, though many other local attractions are easily reached by bus or bike. Alaçatı sits on the Çeşme Peninsula and the port city of Çeşme itself is home to a 16th-century Genoese castle. Head back to Alaçatı via the lemon grove-fringed Babylon beach club or, for something less chilled out, lunch at Cevat’ın Yeri, a lively quayside fish restaurant famous for its octopus.

Alaçatı first came to international attention for its windsurfing. You can spend a morning being blown along the sands of Ilıca Beach but it is adventurous eaters as much as adventure-sport enthusiasts who are the visitors these days: the town draws crowds to its spring Herb Festival, and the Vanishing Tastes Festival in June attracts Turkey’s top chefs.