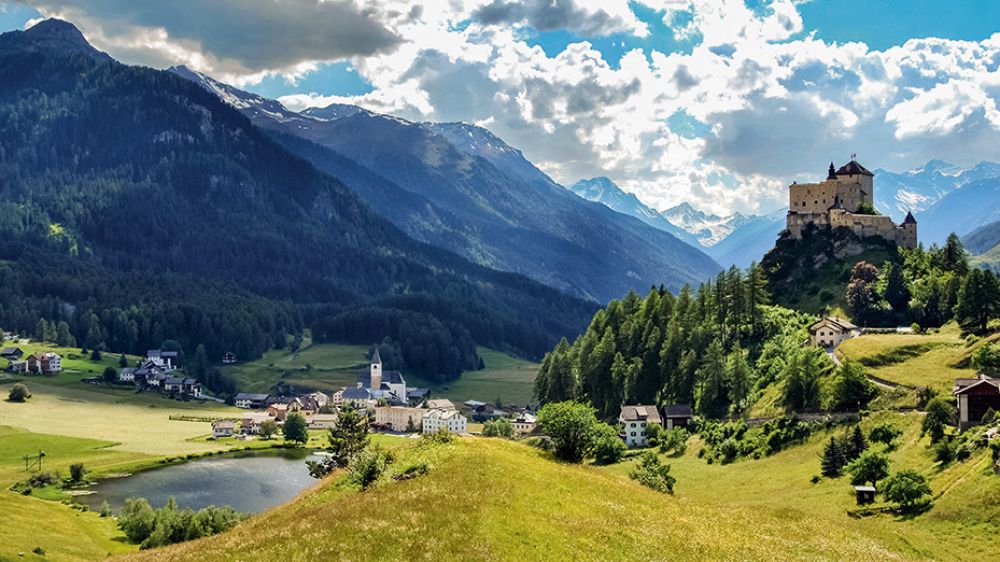 Where will our frustrated wanderlust take us in the year ahead? Jo Davey has shortlisted the destinations with exceptional offerings on the horizon, to help you rediscover the joy of exploration along the roads less travelled

After 20 months, the US recently reopened its doors to the outside world, and its spectacular western wilderness is the ideal antidote to nearly two years of travel claustrophobia. Start with Yellowstone, the world’s first national park, which is celebrating its 150th anniversary by improving relations with the land’s 27 tribes. Explore the park through indigenous eyes on a three-day tour by Native Americans, who share their history as you take in the remarkable expanse of paintbox lakes, geysers, bears and buffalo. Then breathe deep, enjoy the freedom of four wheels and hop state lines with the sun-warmed wind in your hair. Head to Utah for Capitol Reef’s arches of orange and pink and canyons of wind- whipped curves, see the moonscapes of South Dakota’s Badlands, the lush green-blue of Wyoming’s Wind River country and the breathtaking starkness of Colorado’s Monument Valley. The West’s wealth of national parks goes far beyond the bigger names, though. Dodge the crowds and head to some lesser-known spots like Carrizo Plain National Monument, where springtime wildflowers carpet the folded hillsides in purple, yellow, green and orange. Drive the scenic loop road and stop off at Soda Lake, a mirror up close that turns to a silver-white swirl from the viewpoint. America’s West is more than just vistas: in New Mexico, Santa Fe’s historic art scene takes you through tradition and on into mind-warping modernity. Don’t miss the Carroll- worthy Meow Wolf’s House of Eternal Return, an immersive, interactive installation that’s a different kind of trip.

Watching multi-coloured boats bob in the turtle-filled bay, an Oheho Surf Café fresh tuna empanada in hand, feels as far from recent restrictions as you can be. With nearly 2,300 miles between you and the coast of Chile, it’s more fact than feeling. Rapa Nui is a community of welcoming locals, white- sand beaches and freshly caught seafood. Have a go at surfing the small swells in the main town Hanga Roa, wander through craft-filled shops and admire traditional architecture. Base yourself at one of the locally run villas in Hanga Roa and rent a car to see the island. It only takes a day to circle, ticking off Moai statues scattered along the coastline and in the central quarry hill where they were carved. Seeing them in person, standing proud, slumped over or still emerging from the rock-face, is an awe-inspiring experience. One row, stoic and regal, watches over Anakena beach in the north: a perfectly isolated palm- studded beach where the first Polynesian settlers are said to have landed. The southernmost headland is the heart of ancient culture, where Orongo stone village and the immense Rano Kau crater stand. This is where the Birdman competition took place, deciding the next leader of the island in a cliff-scaling, sea- swimming battle for eggs. Now the crater is a lake of patchwork islets and seabirds, its rim undulating over the blue horizon. Reflection on such remoteness happens best a few minutes away on the deck of Tataku Vave restaurant: a pisco sour, fresh ceviche and the sound of the pacific shaping the rock pools.

It’s hard to beat basking in an outdoor heated pool, curlicues of steam framing a scene of snow-capped, sunlit alps. Whether summer or winter, holidays in Switzerland are about the slower, more sustainable things in life. Conservation is key here, which is why there are over 9,000 trains a day, covering even the remotest reaches of the alpine country. Take a day to savour the southern landscapes while trundling past the majestic mountains of the Bernina Pass, and sample the delicious chocolate and cheese of Gruyères on a culinary rail trip in the west. Give yourself a week to explore and you can get under the country’s surface by touring six of its 12 car-free villages; boat across Lake Lucerne and hop between funiculars, cable cars and buses in search of provincial peace. This is a place where even the ski slopes have gone green. Head to Arosa for one of the country’s leading sustainable resorts. It’s train-accessible and guests get around by free buses, electric vehicles and energy- saving, solar-powered ski lifts — but for a slower, snowier way to travel, there’s always a horse-drawn sleigh. In summer, take in the scenery on your own two feet with one of Switzerland’s myriad long-distance treks. The four-day Kesch trail through the Albula Pass, a great sloping valley of green and grey, is your chance to take a deep breath of crisp, snow-chilled air and find mindfulness in the mountains.

This teardrop nation of elephants, tea plantations and rich history has fought hard to leave its past behind and become one of the most in-demand destinations. Densely packed with culture and nature, Sri Lanka is the perfect place for solo tours in small groups, tailored to your priorities with like-minded people. They aren’t just for singles either: there’s a growing trend for solo travel among couples, where partners have different preferences but don’t want to give up on a dream destination that has so much to offer. Share string hoppers and sour fish curry in the graceful town of Galle, a colonial port in Sri Lanka’s south where blue and sperm whales can be spotted off-shore. Head into the national parks to watch elephant herds in Maduru Oya and spot elusive leopards in Wilpattu. Peradeniya’s Royal Botanic Gardens are exquisite, filled with exotic orchids, butterflies and surrounded by the serpentine curves of the golden-green Mahaweli Ganga river. Just don’t forget to look up: great flying foxes litter the trees and soar silently overhead. For culture, learn about tea-picking in the historic highland plantations, climb Sigiriya rock fortress to get up close with colourful frescoes from ancient times and visit the indigenous tribes of Dambana village. Try your hand at making – and tasting – Sri Lankan cuisine in the homes of Kandy locals, who will teach you about the island’s spices and ingredients. With all this so easily accessible, there’s enough time left over to lie back on a beach where turtles come to spawn and fisherman catch the evening’s meal.

Sunrise paints Mount Rinjani’s crater a soft palette of pink and yellow, as tufts of clouds dissipate over the teal waters of Segara Anak Lake. From here, it’s easy to see why the lake earned its name, meaning ‘child of the sea’. Just above the volcano’s ridge, the Java Sea stretches into the sun-dyed horizon. This is Lombok: an Indonesian island long overshadowed by its big-hitting neighbour Bali — a fact that’s definitely in its favour. Less crowded with little-known beaches and an undeveloped, wild north perfect for adventure, Lombok is where you go to unwind and re-learn how to be good to yourself. Around the active volcano, hot springs bubble up and pour over crags to fill cloudy, mineral-rich pools so relaxing you have to be careful not to nod off. To the north, waterfalls cool the air near the mountain base town of Senaru, where Tiu Kelep roars through the thick forest greenery, plummeting into a swimming pool below. The land levels out to the south and west, where rainforests turn to ivory beaches, historic temples and local life. Culture and cuisine meet at Ampenan and Pemenang food markets, which overflow with Sasak specialities and Indonesian classics. Try ayam taliwang, chicken grilled with a layer of fiery sambal and shrimp paste; succulent sate bulayak, meat cooked in coconut leaves; mouthwatering blocks of tempe and tofu; and nasi puyung, the spiciest rice dish in the island. To cool off, look to the Indonesian South Sea: snorkel its rich reefs, surf its waves or see how locals use it to farm some of the finest pearls in the world. Stay at luxury Tugu Lombok in Pemenang or stunning Rinjani Lodge in Senaru and road-trip your way around the island by private driver via the hotel. Or take a food, beaches, waterfalls or temples themed local-led day tour with Magnificent Lombok.

Last year had us all dreaming of isolating elsewhere: preferably a deserted island drenched in sunlight and sandy beaches, where dinner would be someone else’s problem. Home to some of the world’s most breathtaking islands, the Indian Ocean is the ideal place to finally fulfil the away-from-it-all fantasy — and the Seychelles’ Wizard Island has a little more magic than most. Nearer to Madagascar and some 1,000km away from the Seychelles’ capital Victoria, Wizard Island is part of the blindingly beautiful Cosmoledo Atoll, featured in David Attenborough’s Blue Planet, where the only accommodation is a luxury eight- pod, reclaimed eco lodge. Environmentally conscious and sustainable, your visit helps fund efforts by conservationists who inhabit the island half the year. Wizard Island’s cyan seas are a haven for divers, snorkellers and anglers, the waters filled with bonefish, sailfish, tuna and the largest concentration of giant trevallies in the Indian ocean. This fresh seafood is served up Seychellois-Creole style on the sands, accompanied by fresh garden vegetables from neighbouring Alphonse island and the serene sound of the soft waves breaking on the beach. During the daytime, nature walks and coastal trails take in the island’s sooty tern and booby species, with expert naturalist guides on hand. Getting to Wizard Island is part of the adventure: after landing on Mahé main island, another flight takes you to Astove, where you board the boat to Cosmoledo before finally settling into beachfront pods. It’s true edge-of-the-world, out-of-this- world travel, set in unspoiled, spellbinding scenery.

Few countries are set to have a bigger 2022 than Egypt, with celebrations, summits and centenaries throughout the year. Its crowning glory will be the November opening of the Grand Egyptian Museum in Giza, the largest archaeological museum in the world, which has been 20 years in the making. Thousands of ancient Egyptian artefacts have been relocated from across the country, including the entire Tutankhamun collection — just in time for the 100th anniversary of the opening of his tomb. Beyond the museum’s cool alabaster walls, sustainable tourism initiative Eco Egypt is championing nature activities across its natural parks. Wadi El Rayan, two hours south of chaotic Cairo, is a little-known desert balm of yellow and blue, with natural springs, waterfalls and the El Faiyum oasis. Its Unesco World Heritage Site, Wadi Al-Hitan, is a marvel of archaeological marine life in the middle of the Sahara, but the real magic happens once the day-trippers depart. Join an overnight tour and camp in the desert where you can watch Milky Way skies emerge in a haze of purple and blue. Ras Mohammed National Park, along the coast from Sharm El-Sheik, which is set to host the COP27 climate change summit, is a Red Sea nature reserve home to wrecks, reefs, caves, mangroves and bird migration. It’s the perfect place to get back into scuba on a live-aboard cruise, covering a range of dive difficulties. Back on dry land, restoration work has finished on the 3,400-year-old road between the ancient cities of Karnak and Luxor, a sphinx-lined avenue where visitors can follow in the footsteps of Pharaohs.