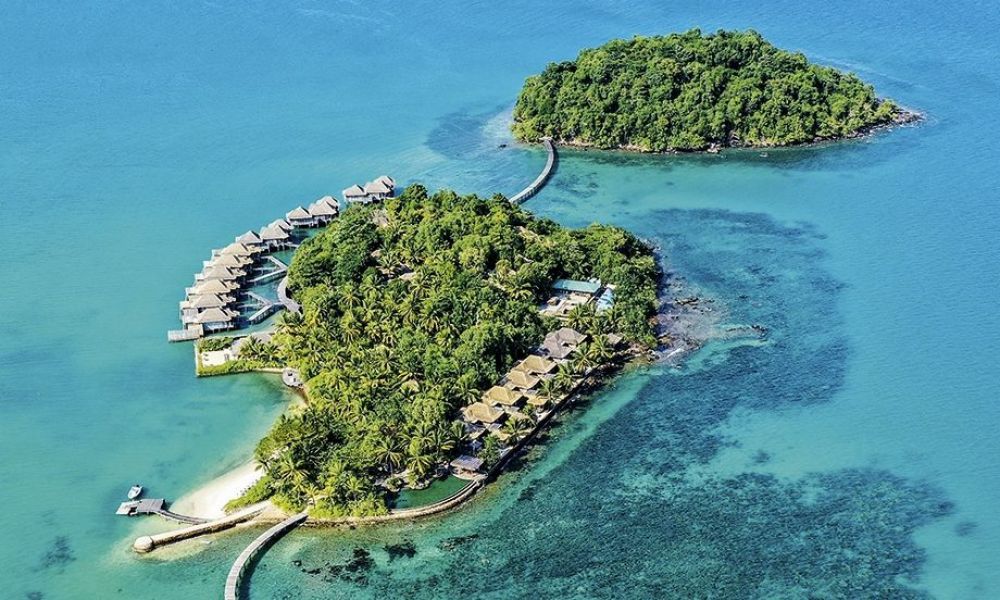 If all you want in the New Year is a blue-sky beach break, there’s an island, atoll or archipelago with your name on it. We’ve picked seven hotspots to celebrate differently

Thailand’s Koh Samui and Koh Phi Phi may be familiar names, but the scenically similar Cambodian isle of Koh Rong flies under the radar. Located in the Gulf of Thailand, less than an hour by ferry from the mainland, Koh Rong is the archetypal tropical island paradise. It has all the palm trees, white sand and laid-back beach hotels visitors craves from Southeast Asia, but what it lacks are crowds of travellers. Given the ease of access from the popular beach town of Sihanoukville, that is nothing short of remarkable – but when you’re strolling along an empty beach or undisturbed jungle trail, you’ll be all the more thankful and grateful that this place feels so unknown.

Admittedly, there are some busy corners – Koh Touch, for example, draws backpackers for its budget digs and party scene – but you’ll find blissful peace and quiet at miles-long Sok San Beach, and even more so on the other side of the island at aptly named Lonely Beach. Quieter still is sister island Koh Rong Samloem, where Lazy Beach and Saracen Bay are the standouts.

Don’t miss the opportunity to visit the local communities of M’Pai Bay on Koh Rong Sanloem or Sok San on Koh Rong: simple Khmer fishing villages that offer a glimpse into islanders’ day-to-day lives. Then continue the cultural immersion by spinning your beach holiday into a multi-centre by heading inland from Sihanoukville to the capital, Phnom Penh, and upriver along the Mekong to Siem Reap’s remarkable ruins and temples.

There are lots of parallels between the Caribbean islands, but one thing that sets Martinique apart is its Gallic joie-de-vivre. A French overseas department (and thus essentially part of Europe), this Lesser Antillean island has a level of sophistication that outweighs its regional neighbours. In some parts there’s lots going on (especially Fort-de-France, the capital) but plenty of the island remains untamed. This is particularly true of Mont Pelée, a still-smouldering, active volcano: it proved its wildness in 1902 with an eruption that destroyed the town of Saint-Pierre.

Other, less lofty, mountains form the backbone of the island and give way to sea cliffs to the north and gentler terrain to south and west. Fertile volcanic soils support impressive tracts of rainforest, while cultivated areas produce bananas and sugar cane for export as well as yams, cassava and sweet potatoes for island recipes.

Fort-de-France is home to an imposing 17th-century fortress and about a quarter of Martinique’s population. This being France, you can expect more festive vibes here than elsewhere in the Caribbean, but you can still avoid them altogether, if you wish, on the headlands, coves, beaches, bays and coral reefs of the coast, with diving opportunity aplenty. Grande Anse des Salines is a stunner for its perfect arc of sugary sand that’s undeveloped beyond a few snack bars and artisan sorbet sellers. Or try pretty Plage du Bourg de l’Anse d’Arlet, where boats on the beach and a stately church spire make this a picture-perfect spot.

The islands of Hawai’i are the stuff of bucket-list holidays. Volcanic, wild and (in parts) so primeval that scenes from Jurassic Park were shot here, there’s a faraway sense of adventure all across the archipelago. Oahu is the busiest island and home to Honolulu, the capital, but for more of a deep-dive into all things aloha, set your sights on magnificent Maui. Second largest of the islands, it’s comprised of two volcanoes (Haleakalā and the West Maui Mountains) and is ringed by some 80-odd sandy beaches in shades of white, black or gold. For the widest range of resorts, Ka’anapali is the go-to spot. Here, you can try your hand at Polynesian traditions such as dancing the hula, surfing or learning to strum a ukulele – or make yourself a Christmas gift in the form of a floral lei.

When it’s time to break away from the beach, adventure awaits offshore. Mid-December sees the arrival of hundreds of humpbacks to Hawaiian waters, heralding the start of whale-watching season. Alternatively, keep things coastal by renting a car or taking a tour to experience the Road to Hana: a near-legendary scenic drive via 110km of twists, turns and waterfalls. Inland, there are hiking routes to tramp in Haleakalā National Park; or visit a farm to meet local producers of coconuts, honey, pineapples and more. Island produce tastes its best at a farm-to-table restaurant such as Pacific’o in Lahaina, which doubles up as a great spot to catch the sunset, a glass of aloha spirit, infused with fresh pineapple, lemon, ginger and a chilli kick, in hand.

Crashing waves, desert dunes and indigenous communities: Colombia’s La Guajira is the Caribbean, but not as you know it. Encompassing a peninsula near the Venezuelan border, this laid-back but little-known region promises sunny escapes for adventurous travellers, its coastal landscape mixing sandy expanses with salt flats and a rolling hinterland of tropical forests. All that sand lends itself to some pretty incredible beaches that are all the better for being undeveloped and wild.

Although Colombia’s upbeat culture makes it magical at any time, there’s extra spice in La Guajira thanks to its pre-Columbian people, the Wayúu, who make up almost half the population. Skilled artisans, their mochila bags – hand-woven in bright patterns and colours – are highly desirable as souvenirs or one-of-a-kind Christmas presents. Equally colourful are the star attractions at Los Flamencos Wildlife Sanctuary: a wetland reserve that’s home to elegant, pop-art pink flamingos and roseate spoonbills. Other wildlife encounters might involve sea turtles or harpy eagles; but out among the mountainous dunes, it’s the landscape itself that appeals. Whether you surf down the dunes, take a boat through the mangroves or go river-tubing down the Palomino, engaging with the scenery will ensure an epic visit.

Tourism being in its infancy makes for fairly basic accommodation options – but also means La Guajira feels totally authentic. It could just be the best Christmas gift you’ve ever given yourself.

As if its palm trees, platinum sands and sapphire seas weren’t beguiling enough, Zanzibar feels extra exotic thanks to its nickname: Spice Islands. This 40-strong Indian Ocean archipelago united with Tanganyika to form the republic of Tanzania in the Sixties, but its history stretches back much further than this. Stone Town, the former capital, has millennia-old roots, though most of the buildings in this World Heritage Site date from the 19th century. Its twisting lanes lead to all sorts of discoveries – mosques, hammams, a sultan’s palace – and the culture is a mix of African, Indian, Arabian and European influences. It’s a fantastic spot for immersive day-trips if only you can bear to tear yourself away from the beach.

And what beaches they are – all brilliant-white beside safe, shallow water that’s walkable for quite some distance when the tide is low. On Unguja, the main island, the tidal range is less distinct at the top end, which is also where some of the most appealing hideaways are found. Nungwi Beach is the big draw here for its powdery sands, local flavours and sunset views across the sea to the African continent. To explore other shores, island-hop beyond Unguja to largely undeveloped Pemba, almost deserted Mnemba, off-the-beaten-track Mafia and pristine Chumbe, which is home to a single high-end, off-grid eco-camp.

And that nickname? Make the most of your time here by booking a cookery class or visiting a nutmeg, vanilla or black pepper plantation to discover, as monikers go, this one is very well deserved.

If you want to get away from all the festive fuss, there’s no better place than one considered ‘the last natural frontier’. Such is Palawan: the Philippines’ most untouched island province. Regularly appearing on lists of Asia’s and even the world’s best islands, it’s a place of astonishing natural beauty, known in particular for limestone cliffs plunging into almost luminous waters in shades of emerald and jade. There are secret lagoons, shipwreck sites and an underground river to discover (the latter, accessible by boat, is one of the New Seven Wonders of Nature and a World Heritage Site), not to mention volcanic elements such as hot springs and an extraordinary crater lake.

Puerto Princesa, the gateway, merits a good few days’ exploration for an immersion into Filipino cuisine. A mix of Spanish and Asian flavours has gifted the island with dishes such as grilled chicken inasal, lechon (whole roast pig), halo-halo (a fruity crushed ice drink) and tamilok, a shell-less clam that looks unappetising but is nevertheless a popular local seafood.

From Puerto Princesa, head north to Coron and the land of the Tagbanua indigenous group to find karst scenery, gemstone-coloured lakes and a jungle interior. San Vicente is renowned for its magnificent Long Beach, but the absolute jewel in Palawan’s crown is El Nido. Set your sights on its jaw-to-the-floor sandy beaches looking out across coral reefs to an island-studded seascape. With sands ranging from peach to bone-white, it’s a magical, tropical paradise in every conceivable sense.

If you’re dreaming of a white Christmas but also hankering after tropical temperatures, you’ll find the best of both worlds in the Maldives. OK, so that white element comes via sandy beaches, not frosty fields, but who cares if this Christmas fantasy is unorthodox? Hotels here embrace the season with festive cheer and fairy lights; and although boughs of decorative pine may not be plausible at the equator, Christmas trees made from champagne bottles or painted coconut husks feel all the more cheerful for their ingenuity and effort.

The classic Maldivian image is one of tiny isles bearing single hotels, but there’s far more variation here than you might think. Spread across some 90,000sq km of Indian Ocean, there are more than 1,000 islands grouped into 26 coral atolls. The climate and wildlife (from whale sharks to manta rays) vary across this vast area, but you can be sure of soft sands and teeming house reefs wherever you choose to stay. Villas rising from the water or tucked secretively into beachfront scrub provide comfortable sanctuaries from which to soak up soporific views. Be it a strip of white sand, the occasional turtle or an impossibly blue lagoon, it’s a setting that calls for the laziest of days.

Beyond dolphin-watching and snorkelling on kaleidoscopic coral, most atolls have local communities within reasonable reach for a cultural fix. From the beat of boduberu drums to local dishes such as mas huni (shredded tuna with onion and coconut), there’s much more to discover than might at first meet the eye.