Succulent, sweet and super-versatile, the long-time popularity of clams on North American tables is one food obsession we’d do well to follow. Clarissa Hyman has the lowdown

Elvis Presley’s 1967 Miami beach movie Clambake is so awful it ends up being awesome… almost. The title song repeats, frequently, the refrain ‘Mamma’s little baby loves clambake, clambake’ and, together with the cheesiest setting and campest acting imaginable, it makes you want to bury your head in the sand – and not in a good way. In its defence though, it did tap into a fusty old British dream of the good life across the pond with fun, sun, sea and – clams. Not just clams, but clams a go-go in the movie that promised ‘the wildest beach party since they invented the bikini and the beat!’. The clambake is an American institution, although briny-sweet clams are found worldwide. They come in many forms, from tiny to very large.

The shells can be either hard or thin and brittle (when they are known as ‘soft-shell clams’, ‘steamer clams’ or ‘Ipswich clams’) and consist of two, generally equal, halves joined at the base with a hinge joint. Clams are often eaten raw (as with all shellfish, check their provenance carefully), but are more commonly steamed, fried, boiled or baked. One of the best clam dishes of all is the famous spaghetti alle vongole made with garlic, white wine and small ‘carpet shell’ clams that have grooved pink and white shells and meaty flesh. Another highly popular Italian clam is the large, brown-beige ‘prairie clam’, heavily marked with concentric wart-like ridges.

Its Italian name, tartufo di mare, or ‘sea truffle’, indicates the high regard in which it is held. Its soft, silky texture and light, savoury flavour make it ideal for risotto and pasta dishes. The colourful ‘amande’ gets its name from the French word for almond, thanks to its nutty flavour. Sweet, meaty and a little chewy, it has been dubbed the ‘poor man’s oyster’, and is usually served raw as part of a seafood platter or cooked à la marinière. Native to the Camargue region of southern France, tiny, oval ‘telline’ clams are also traditionally eaten raw, although they are delicious cooked with a Provençal tomato sauce or steamed and garnished with parsley and garlic. ‘Palourde’ or ‘carpet-shell’ clams are found from the UK to the Mediterranean and are light with darker brown streaks.

The ‘Venus clam’ is a generic name for a family of shiny clams that range in size, colour and shell pattern. They go well with pasta but are quite sandy, so take care to clean and soak properly, and strain any juices they are cooked in. Glossy brown and brittle, ‘razor clams’ always dazzle the eye, resembling as they do the cut-throat blades demon barbers once wielded. Found along the Atlantic coast and parts of the Mediterranean, they burrow into the soft sand exposed between low and high tide. Getting them out is difficult and the edges of the shell are dangerously sharp. Some say they can be harvested by pouring salt into their hole, but fish expert and historian Alan Davidson dismisses this as wishful thinking, quoting a 19th-century source who queries why any creature that lives in salt water should be tempted to leave its safe home by an illogical offering of salt? The muscular white meat, which almost entirely fills the shell, is known as the ‘foot’. Steaming and broiling brings out their succulent sweetness. Americans are much more enthusiastic about clams than the British.

Davidson puts this down partly to early settlers adopting the eating habits of Native Americans, who took advantage of the rich harvest on their shores. It’s said that clams established colonies in Southampton and Portsmouth after being tipped overboard by the chefs of ocean liners. But most in the UK are raised on farms. ‘Hard-shell’ is the most widely eaten of American clams. Also known as ‘quahog’ (pronounced ‘co-hog’), it has a thick, creamy-grey shell and is dredged or racked from the sandy beds of coves and bays. On the eastern seaboard, small clams are called ‘littlenecks’ after Little Neck Bay on Long Island, once an important clam centre. They are usually eaten raw, while larger ‘cherrystones’ are stuffed, baked, added to chowder or turned into clam juice. ‘Surf clams’ with thick, triangular shells have a delicate, sweet flavour with a pleasant salty aftertaste and are mainly used in chowders or served deep-fried. Perhaps the most intriguing, downright bizarre clam is the ‘geoduck’, or ‘king clam’. Pronounced ‘gooey-duck’, the name of this giant soft-shell clam derives from a Native American word meaning ‘dig deep’.

In the Pacific, they are harvested by divers, who use water jets to wash away sand debris to reveal the clam with its phallic-like neck. In Japan, the sweet, almost crisp meat is eaten raw, blanched and served with a dipping sauce or stir-fried. In China, where it’s known as the ‘elephant trunk clam’, the neck meat is dried and added to broths. In the US, it is popular in chowders and clambakes. Which brings us back to Elvis. The aforementioned film may be at the bottom of his onscreen barrel but if I’m going to hang out at a beach party, then I want it to be with The King. The very thought of it makes me as happy as a clam. 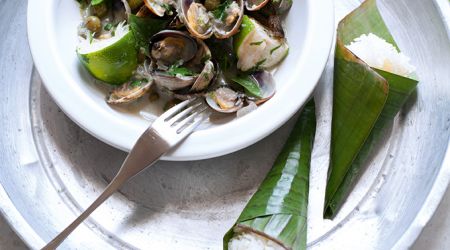 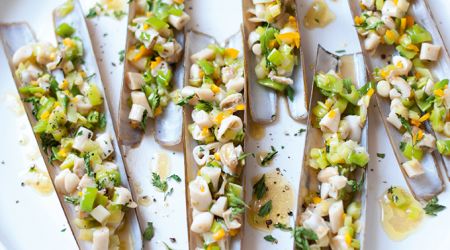 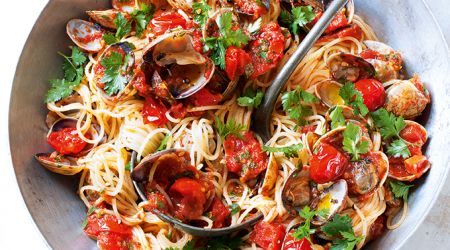 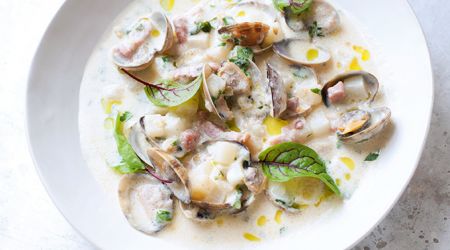