Clarissa Hyman digs into the past of this delicate spud famed for its creamy, subtle chestnut flavour with recipes by Linda Tubby

Jersey is a singular place, a Channel Isle not even in the Channel, proud of its convoluted constitution and relationship with the Crown, its ancient independence and parish individualities. An island as pretty as a postcard, yet still with an air of suburbia. A little Englander’s dream of social order and old-style courtesies, but also une petite France, with roads signs in French and Jersiais (Anglo-Norman) names for places and people.

Of all the produce grown here, the new potatoes are the most iconic. Two 19th-century islanders played key parts in its history: John Le Caudey, who concluded the steep south-facing slopes, light and well-drained soil and mild climate would be ideally suited to early crops; and Hugh de la Haye, who bred a kidney-shaped potato from a large seed potato bought at a local shop in 1878. The potato, which was initially an amusing curiosity with 16 sprouts, was divided and planted, and gave rise to generations of fine early potatoes. The Jersey Royal was first known as the Fluke, due to the circumstances in which it originated. It was then named the Jersey Royal Fluke in honour of Queen Victoria.

Jersey once traded coloured stockings and salt cod with Portugal (some grand houses on the island are still called ‘cod houses’) for wine and citrus fruit. The link has continued. Jersey’s Portuguese community, mostly originating from Madeira, were brought over seasonally to pick potatoes, and many settled on a more long-term basis, working in the tourist industry or as gardeners and agricultural workers.

Jersey Royals can only be grown in Jersey and now enjoy Protected Designation of Origin status and a cleverly designed logo as proof of authenticity. Each Jersey Royal can be traced back to its field of origin. Shallow-eyed with a fragile golden skin and creamy yellow flesh, it has a chestnut-flavoured taste that is immediately distinctive.

The seed potatoes are dug and selected in late June as soon as the harvest season ends. The first shoots are removed, then the potatoes are stored upright in boxes. In November, cultivation starts under glass, but the main outdoor crop is planted from January to April. The season can start as early as mid-March. This year, indoor-grown crops were ready for sale in February, a month earlier than usual due to a mild winter, although they subsequently had to be wrapped in blankets to prevent them from catching a sudden chill.

There is always a mad dash to get the first batch of marble-sized Jersey Royals onto our plates. April sees a flurry of intense marketing; they still have the cachet (no one needs to be told Jersey Royals are indeed potatoes), but face increasing competition from other ‘earlies’ from Cornwall and Pembroke, as well as Cyprus and Egypt. Globalised trading has taken its toll on Jersey Royals, and they have perhaps lost their unique ‘early’ status.

Sadly, it is not uncommon either to hear sighs of nostalgia that Jersey Royals are not what they used to be. According to Slow Food UK, the island has only about half a dozen commercial customers vying for the crop – the giant supermarket chains that buy 90 per cent of the harvest. This creates particular pressures. Very few farmers use the traditional seaweed fertiliser known as vraic anymore, and most fields are covered with perforated polythene to force the potatoes even earlier. Few farmers take the trouble or can devote the labour to hand-plant and harvest the steepest slopes, or côtils, that catch the morning sun just like the best vineyards. In blind tastings, Slow Food UK reported these traditionally cultivated potatoes tasted better.

Many local farmers also scorn the supermarket-led trend for ‘baby’ Jersey Royals because the earliest of the early is not always the best. A degree of maturity is needed to bring out the full, nutty richness, and many islanders prefer to eat theirs later in the summer.

The dense but not over-waxy texture of the potatoes makes them best suited for boiling, frying, gratins and salads as they do not disintegrate when steamed or boiled. The potatoes are best cooked with the skins on to preserve their nutrients and flavour, and only need a quick wash before using. At their finest, Jersey Royals are true luxury ingredients, best simply served with butter, mint and flakes of sea salt.

They are a seasonal treat because they are tender, sweet and a natural accompaniment to other early-summer seasonal produce such as salmon, crab and lamb. At luxurious Longueville Manor on the island, you can find them served with broad beans, roast scallops, lobster, crab and langoustines or sliced with a salsa of tomatoes, peppers and herbs. The popular Jersey Pottery bakes them with butternut squash or serves them in a warm salad with serrano ham, roasted peppers and figs.

Indisputably, though, the best way of sampling the potatoes is via the island tradition of roadside stalls, where money for farm produce is left inside honesty boxes – and no one abuses the system. As one islander explained to me, it is the best way of knowing you’re eating potatoes that have been picked the same day. Slathered in plenty of sunshine-yellow Jersey butter and served with sweet-fleshed lobster straight out of the water, these humble spuds are a right royal feast. 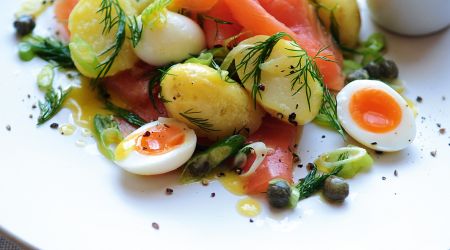 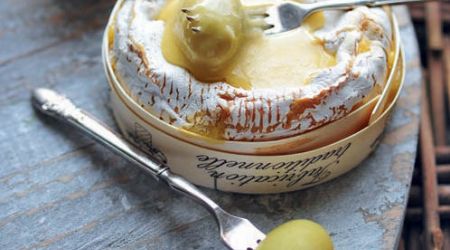 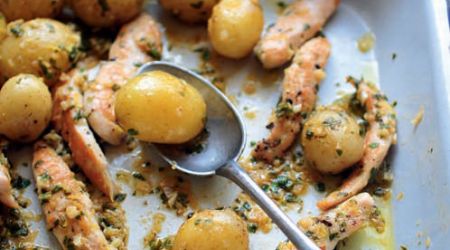 Warm Jersey Royals and chicken with salmoriglio and rocket 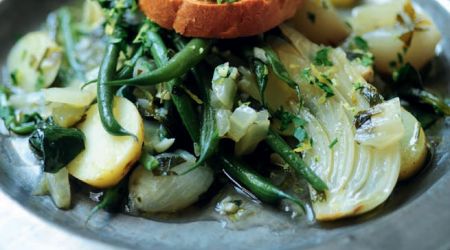 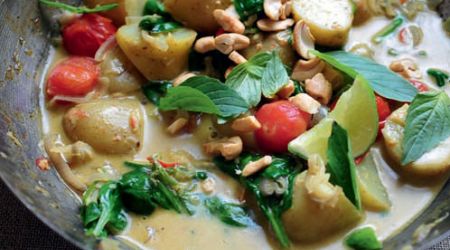 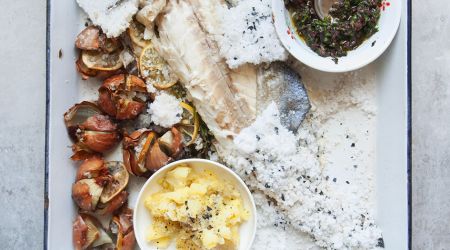