Give salads an aromatic twist with delicate chervil and take feisty tarragon for a twirl with ripe and juicy tomatoes. As for spring lamb and rosemary, it’s a no-brainer, says Helen Hokin with recipes by Linda Tubby

The world might have gone to war over spices but herbs were dismissed, even despised, as peasant food foraged from meadows, until the Elizabethans potted the first sprig of rosemary. From then on kitchen gardens flourished and herbs were acknowledged as an important flavouring for food. Historically, however, they were valued for their medicinal properties. The Anglo-Saxons knew herbs as well as the ancient Chinese herbalists and left a precious legacy: The Leech Book of Bald is England’s oldest surviving medical book. Written by a Saxon monk, it contains remedies using all manner of herbs.

When it comes to deciding which aromatics to use, chuck your preconceptions out with the plastic jars of dried herbs loitering at the back of your kitchen cupboard; they’re probably past their sell by date anyway. Like wine, herbs have fallen victim to typecasting: parsley sauce with fish, mint with lamb. Forget it. Experiment. Try new combinations. Your imagination is all that stands between you and the bright new flavours of spring. You don’t need to have your own herb garden, either. As long as you have a window sill there’s no excuse for not growing your own.

TARRAGON: a remedy
It might be because of its dark, elegant leaves and surprising depth of flavour – liquorice, pepper and a back note of vanilla – that the French crowned it the aristocrat of culinary herbs. Some say its name, meaning little dragon, came about after it was used as an antidote to snake and mad dog bites. But it might also have something to do with its fiery vigour and the way it leaps about the mouth, warm and tantalising.

A newcomer, it arrived with Arab traders during the 13th century. Two hundred years later this noble herb featured in just about every palace kitchen in Europe. In 1633, John Gerard, the herbalist to King James I, noted that: ‘Tarragon is hot and dry in the third degree, and not to be eaten alone in salads, but with other herbes, as Lettuce, Purslain, and such like.’

It is the star of tarragon vinegar, which by many accounts is the only vinegar to use in a classic tartare sauce. It is a key ingredient in fines herbes, sauce béarnaise and poulet a l’estragon. The French seem to have a better handle on it than most, so it makes sense that French tarragon has come to be viewed as the true tarragon – more delicate compared to its coarse-flavoured Russian cousin. The best way to tell the difference is to taste it, of course, and wait for a slight tongue-numbing experience – that way you know you have the right type. Use it sparingly or its strong flavour will run amok through your dish smothering every ingredient in its path.

Discard tarragon that has black, yellow or limp leaves. Wet leaves quickly turn black so do not be tempted to rinse them until immediately before use. Store in the crisper drawer in the fridge where they will keep for about a week. Remove the leaves from the stalk and chop. Its big, bolshie flavour is a match for beef, but used judiciously it brings out the best in chicken and dairy products, including butter, cream, eggs and mayonnaise. Try it with the new season’s salad and vegetables; to pair it with tomatoes is to arrive prematurely in heaven.

ROSEMARY: for remembrance
‘Where rosemary flourishes, woman rules,’ was a popular saying during Elizabethan times and the cause of quiet rage among husbands who thwacked the heads off herb bushes to cut their wives back down to size. On a happier note, rosemary is a symbol of enduring friendship and loyalty. And, as Ophelia famously remarked: ‘There’s rosemary, that’s for remembrance.’ Its dual role as an emblem of fidelity and remembrance makes it one of the few plants to appear at both weddings and funerals.

It first grew wild on the Mediterranean coast and its name, ‘ros’ meaning dew, and ‘marin’ of the sea, might be credited to the Romans. They associated the evergreen with Venus, goddess of love and fidelity, who rose from the water on a seashell. When its foamy mass of blue flowers tumbles down coastal hillsides to the cliff edge they could almost be mistaken for ocean waves.

Believing that rosemary fortified the brain and memory, students in ancient Greece wore a lucky rosemary wreath during exams. Since 500BC the hardy herb has featured prominently in the Mediterranean lifestyle, as both a medicine and ingredient. By the 13th century, wild rosemary perked up dreary, meatless peasant food. Homes and hospitals were fumigated with the scented smoke of its burning twigs that were believed to have antiseptic properties. The Elizabethans refined it a little more, starting a trend for growing it in pots at home while confectioners candied its needle-like leaves. Our trusty 17th-century herbalist John Gerard recommended rosemary boiled in wine and inhaled through the nose to cure coldness of the brain. At around the same time, Nicholas Culpepper claimed it would cure dizziness.

The Italians show rosemary at its best. Think roast lamb with wild rosemary, rosemary-scented foccacia, a herby pizza crust and rich slow-cooked tomato sauces sweet with red peppers, garlic and the lemony, pine aromatics of Italy’s unofficial national herb. And without it the French would not have created the fragrant herbes de Provence mix.

To prepare, strip the needles from their woody stalk. They are super tough and need finely chopping – a chore, perhaps, but worth it to avoid biting down on hard needles and ruining the texture of a dish. Precisely because of its woodiness it needs plenty of time to break down and impart its flavour to a recipe, so always add it at the start of the cooking process. To check for freshness, twist off a couple of leaves, green on top and frosted silver beneath, and rub them gently between your fingers to ensure they release their beguiling lemon and camphor aroma. Morsels of fish, bread and meat skewered onto rosemary stalks will take on its flavour. For optimum results, pair it with other Mediterranean ingredients: pine nuts, olive oil, parsley, tomatoes, garlic, fish, chicken, lamb, rabbit and honey. Your cooking will exude sunshine.

CHERVIL: A symbol of rejoicing
The ancient Greeks and Romans used its delicate and elevating anise-flavoured fronds in salads and as a cooked leaf vegetable. The Romans turned to chervil when in need of an aphrodisiac, at least according to Pliny. And, as they swept across the continent, Roman legions left in their wake herb gardens planted with healing herbs designed to meet their personal needs en route.

They undoubtedly introduced the subtle parsley-like leaf to our shores, but it wasn’t until Anglo-Saxon times that it assumed a similar role to the one played by antibiotics today. The Saxons were literally spellbound by chervil. Convinced of its special medicinal properties, 10th-century expert herbalists included it in their ‘nine sacred herbs’ blend (including, among others, fennel, watercress and nettle), believed to be an antidote to illness. Pounded into a drinking potion then added to ale, milk and honey it was thought to protect against disease. Although its nutritional properties were considered secondary, it was only a matter of time before its sprightly, clean flavour found its way into English kitchens.

Perhaps because of its restorative powers it has been dubbed the herb of rejoicing or, put another way, the herb to cheer melancholy. John Gerard, the renowned 17th-century herbalist, remarked: ‘It is good for old people, rejoiceth and comforteth the heart and increase their strength.’ He also recognised it as an ingredient: ‘The leaues of sweet Cheruill are exceeding good, wholesome, and pleasant, among other sallad herbs, giuing the taste of Anise seed vnto the rest.’ The French have always loved it and given it a special place in their cuisine ­– it makes up a quarter of the ingredients used in the culinary mainstay, fines herbes (with parsley, chives and tarragon).

A member of the parsley family, chervil is not only delicate in appearance but flavour, too – somewhere between parsley and anise with a pleasant liquorice note on the end. Choose clear, green leaves and, if you’re lucky enough to be able to lift it straight from your garden, wash it thoroughly to remove the earth caught in its low-growing leaves. Bone-dry leaves will keep in the crisper drawer in the fridge for about a week. Don’t bother chopping it. Instead, pull each leaf from the stem and separate out its triangular sections. Its extreme fragility means it is easily impaired by heat, so only add it towards the end of cooking.

This elusive spring flavour, when used in the right quantities, (which is a matter of trial and error, according to the dish you’re preparing) balances and enhances the mild flavours of chicken, courgettes, cream, eggs, soft cheeses, fish, sauces, soups and shellfish. Scatter it as a garnish to see how its gentle aromatics work wonders on veggies like peas, carrots and potatoes. 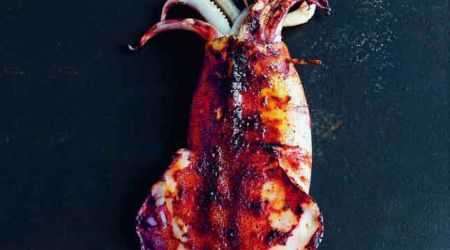 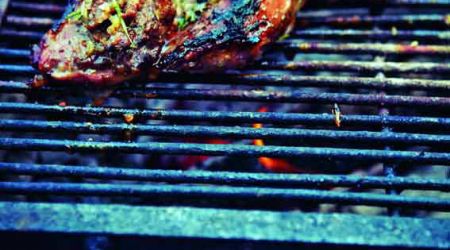 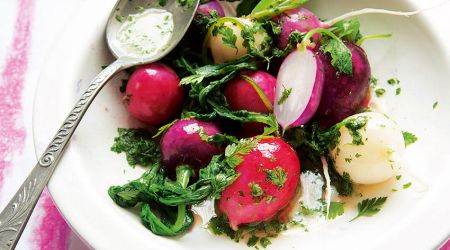