Baked, steamed, mashed and candied, the vibrant orange-and pink-fleshed root vegetable works a treat in both sweet and savoury dishes. And this starchy star ingredient is at its prime for autumn feasts and Halloween suppers, says Clarissa Hyman with recipes by Linda Tubby

After a famous still life entitled Lemons, Oranges and a Rose by Francisco de Zurbarán – the leading painter in 17th century Andalusia during the reign of Philip III – was radiographed, the results showed the sublimely convincing plate of citrus fruits was originally flanked by a platter of candied sweet potatoes. Quite why he chose to paint over the batata confitada is not known. Perhaps someone ate these rare and tempting, exotic delicacies imported by the Spanish conquistadores from New to Old World shores.

When the sweet potato arrived in Europe, the foodies of the day welcomed it with enthusiasm, along with other sweet novelties such as vanilla and chocolate. Spanish historian and navigator Fernández de Oviedo wrote, ‘A batata well cured and well prepared is just like fine marzipan’, and described them as a singular and precious fruit. The 16th century English mariner and slave trader John Hawkins called them ‘the most delicate root that may be eaten’. One contemporary recipe starts with washing them after the harvest and then curing them under light shade for eight to 10 days. The sweet potatoes are then roasted so they will taste ‘as if they had been dipped in a jar of jam, they will be so honey-sweet.’

The shared name invites the wrong assumption that sweet potatoes are related to the potato. In fact, they are not even distantly related. The sweet potato (Ipomoea batatas) is actually a vine in the morning glory family, and was one of the first plants to return with Columbus after his landfall at Haiti. Unlike the Andean potato (Solanum tuberosum) it gained immediate popularity. King Ferdinand and Queen Isabella liked them enough to have had them planted in their Spanish court gardens, and their son-in-law Henry VIII of England, is said to have enjoyed them in heavily spiced and sugared pies, in the belief they were an aphrodisiac.

These ‘venerous roots’, often sold as crystallized slices, were a saucy feature of many a Tudor banqueting table: Shakespeare’s Sir John Falstaff in The Merry Wives of Windsor, thinking about the prospect of future sexual frolics, cries, ‘Let the sky rain potatoes’. The date the play was written makes it clear the reference is to sweet potatoes, not Golden Wonders.

The Aztec word camotli seems to be the root of all the words found for it in the Pacific area. In Peru, the use of sweet potato goes back to at least 2800BC, perhaps even much earlier. The sweet potato is found not only in the New World but also in Polynesia, from Hawaii to New Zealand, where it is a popular Maori staple called kumara. There is speculation that it could have spread from western South America either deliberately or as a ‘stowaway’ on driftwood. Another theory is that the sweet potato, post-Columbus, was taken from Spain ever further eastwards.

The popularity of the sweet potato in China is said to date back to the 16th century when there was a famine in Fujian province and the authorities sent out a mission to find new food plants to Luzon in the Philippines, where it may have arrived from Mexico via the Manila galleons. Before long, sweet potatoes had conquered palates sufficiently to be widely sold boiled and roasted by vendors in Peking.

Early records from travellers and explorers in the New World describe sweet potatoes as roasted or boiled roots that taste like cooked chestnuts. It is still a description that holds true, and their nutty, buttery flavour and soft, mealy texture belies their irregular and elongated skin which can be purple-red, yellow or white. The inner flesh can also vary from cream to purple to deep traffic-light orange – choose the latter for the best sweet flavour and moist texture.

The sweet potato needs warmth and long daylight hours to flourish, but it does tolerate poor soils and is resistant to drought. So, although it is hard (though not impossible) to grow in the UK, it is an important secondary crop throughout subtropical countries.

The starchy tubers are a staple in the southern US, where they are often simply called potatoes, as opposed to the ‘Irish’ potato. Throughout the States, however, glazed or candied sweet potatoes are as much a part of American thanksgiving dinners as turkey and cranberry sauce. Baked with butter, brown sugar or maple syrup they are more a rich, sticky relish than vegetable side dish.

In general, you can cook them much as you would ordinary potatoes, although plain boiling tends to leave them dull and watery. Bake or roast them in their skins to serve with fish or meat, or then mash with masses of butter and a little milk to pair with baked ham. Deep-fry thin slices to make crisps to serve with drinks. Use as the basis for a spicy curry to combine the sweet and pungent. Or take a tip from chef Allegra McEvedy and cut into wedges, bathe in olive oil, smoked paprika and sea salt and ovenbake for 20 minutes. They won’t be super-crisp, but deliciously soft with caramelised, crunchy bits.

They also lend themselves to breads, cakes and desserts. The classic sweet potato pie is similar to pumpkin pie, and Jane Grigson describes a traditional Portuguese dish of sweet potatoes with egg yolks, cinnamon and cream as ‘exquisite, delicate and delicious’. It’s a direct line back to 1589 when a discriminating gentleman called Richard Hakluyt wrote, ‘These potatoes be the most delicate rootes that may be eaten, and doe farre exceed our passeneps or carets.’ Sweet potatoes, indeed. 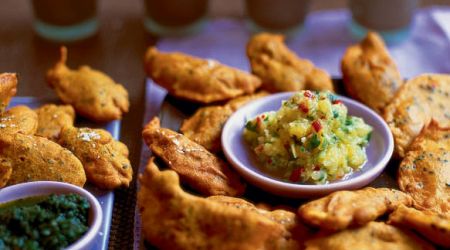 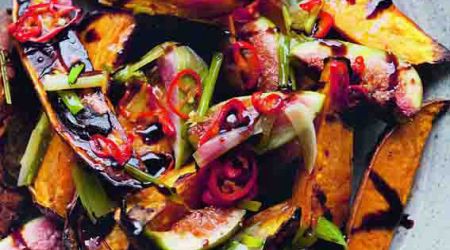 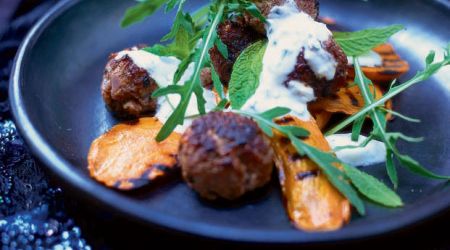 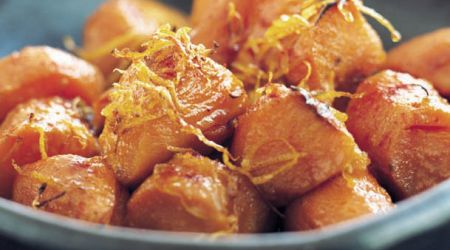