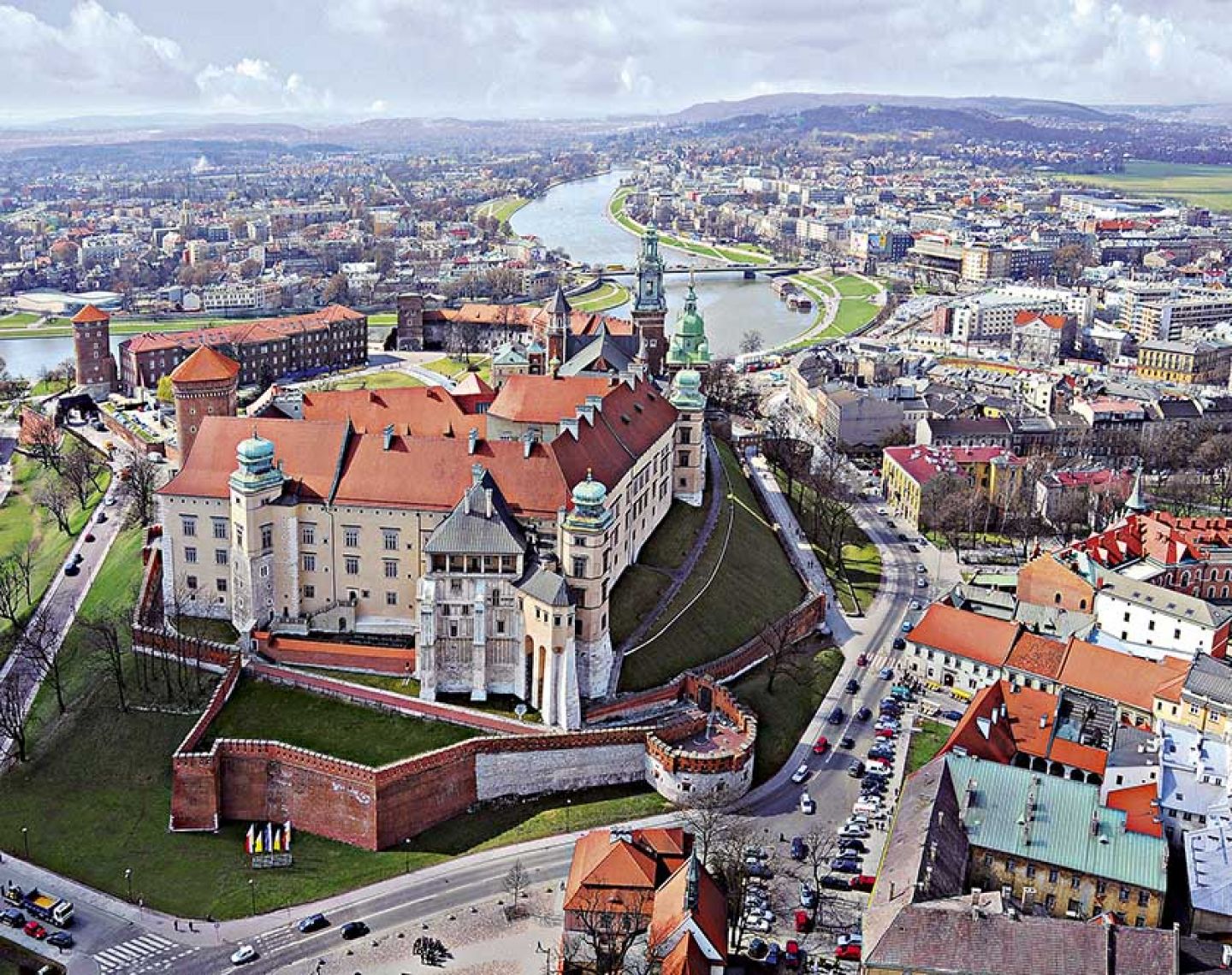 One of Europe’s most spectacular Old Towns, a fast-evolving dining scene and some lively, artistic neighbourhoods make for a surprising spring getaway, says Amy Grier

It’s got the architectural clout and café culture of Florence, with the pace of change of Berlin. Having been one of the world’s most conquered cities, Krakow today is a chance to witness the past and get a taste of the new. Poland’s ever-shifting food scene means you can taste the traditional alongside the creative.

To get a sense of this former royal capital’s grandeur, enter through the Barbican, a preserved gothic fortification topped by seven turrets. Follow the Royal Road down to 13th-century Rynek Glowny, one of Europe’s largest and liveliest market squares. Listen out for the lone trumpeter playing the ‘Hejnal’ – Krakow’s anthem – from the towers of St Mary’s Basillica. Then head to the top of the Town Hall Tower for the best views of the city. Continue on and you will reach Wawel Castle, along the way stopping to explore the narrow streets, sprinkled with museums, boutiques, cobbled courtyards, cafés and bars. Further south, echoes of the past – and an influx of artists and bohemians – can be found in the former Jewish district of Kazimierz, which has been transformed into Krakow’s creative centre. Set against a backdrop of ancient synagogues and reclaimed tenement buildings, you’ll find artisan cafes offering the best coffee in the city, bijou art galleries and bars where customers spill out onto the streets clutching cold glasses of beer (and even the odd bottle of local Polish wine).

Golden Tulip Krakow City Center 00 48 12 426 99 90, goldentulipkrakowcitycenter.com is five minutes’ walk north-west of Planty Park, which encircles the Old Town. It’s a sleek setting with spacious rooms, a plentiful buffet breakfast and knowledgeable staff. For a more romantic, yet equally practical, nook, Kanonicza 22 00 48 603 951 377, kanonicza22.com is the jewel in Krakow’s crown. Located on Ulica Kanonicza, one of the oldest streets, and in the shadow of Wawel Castle, it’s set in a perfectly restored 14th-century mansion and features just three decadently styled apartments. Each blends rich, historic opulence with the finest modern comforts.

While the Goral influence is still strong in Polish dining culture, Krakow’s restaurants are moving forwards. In the centre of the Old Town, just down from the Rynek, Miod Malina 00 48 12 430 0411, miodmalina.pl will ease you into the culinary cornerstones of Poland. Try the zurek (ham and egg soup served in a hollowed-out loaf of bread), bigos (sauerkraut with meat) and the local cheesecake. Pod Baranem 00 48 12 429 4022, podbaranem.com serves century-old recipes in a fine, cosy setting, at the south-east corner of Planty Park. It boasts the best pierogi (dumpling-like parcels) in the city, hand-sized goblaki (stuffed cabbage leaves) and daily specials ranging from Krakow- style herring to pig’s trotters. Bringing the classics right up to date is Pod Nosem 00 48 12 376 0014, podnosem.com – a restaurant at Kanonicza 22 hotel with tables set out on the street, opposite the former home of Pope John Paul II. It does fine dining in the modern European sense: Venison tartare, nettle soup, goose gizzards and szarlotka (apple pie) are highlights. Achingly modish Studio Qulinarne 00 48 12 430 6914, studioqulinarne.pl sits on a quiet side street on the edge of Krakow’s newest food district, Kazimierz. Just a short walk from the river – perfect for a pre-dinner stroll to work up an appetite – it has strong Asian and Italian influences, and offers dishes such as lamb tartare, celeriac carpaccio and shrimp tagliolini.

Late afternoon, head to the Kladka Ojca Bernatka bridge and drink a cocktail or two on one of the Vistula river boats. As dusk settles, head into the Kazimierz district and to Plac Nowy for a shot of homemade flavoured vodka at the milk bar and a zapiekanka (long pizza bread, furnished with cheese and other toppings) from one of the food vendors.

Currency is the Polish zloty. Krakow is one hour ahead of GMT, and travel time from London is 2.5 hours. The cost to carbon-offset for this trip is £2.43. For more details, climatecare.org

The Polish tourist board has a useful website to help you plan your trip to Krakow and beyond. Visit poland.travel