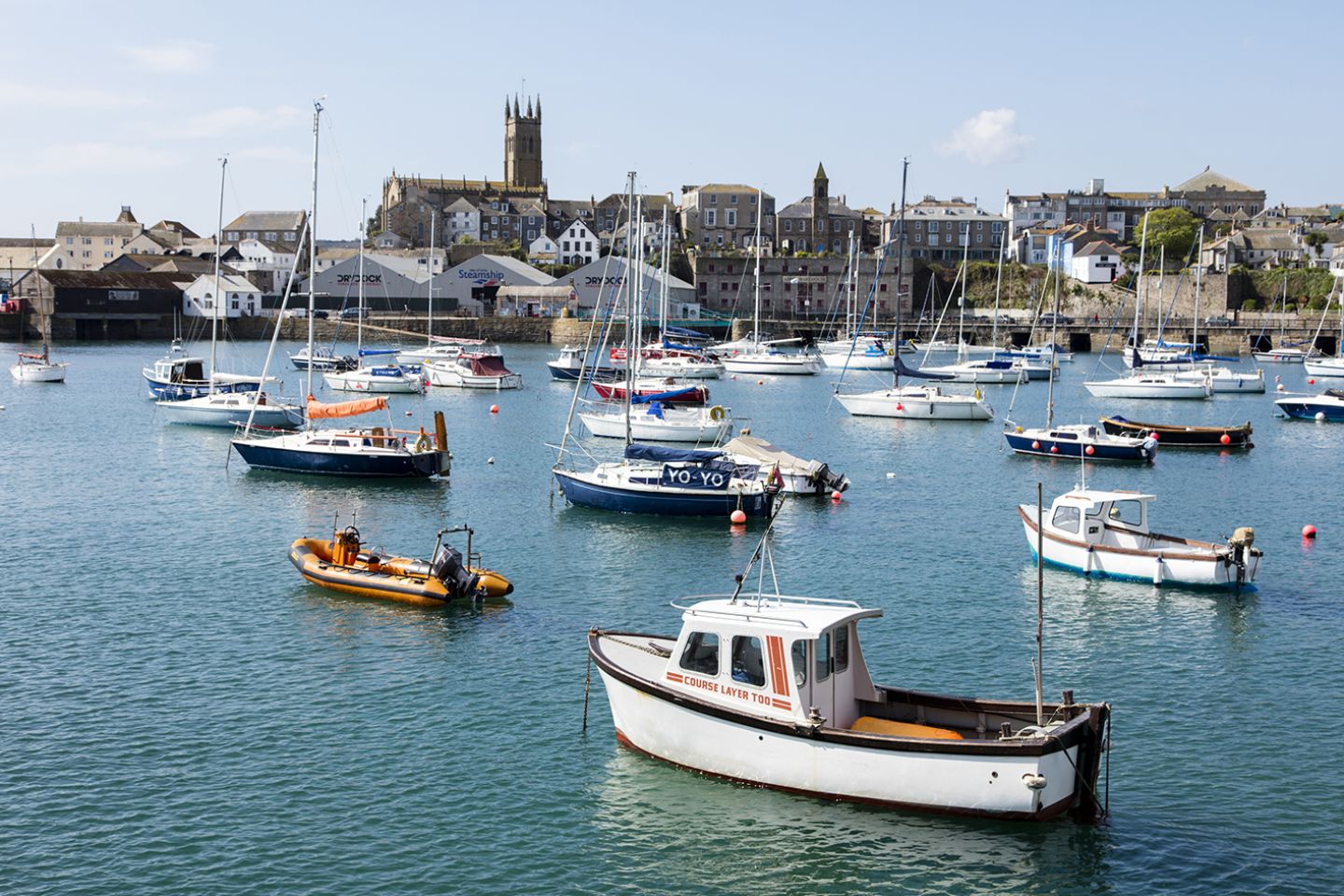 This ancient Cornish market town is a haven for art galleries, boutiques and some of the best food and drink in the South West – and not a pirate in sight, says Gabrielle Sander

Think of Penzance and Gilbert and Sullivan’s piratic comedy opera likely springs to mind. Though pay a visit to this Cornish seaside town and you’ll discover far more charming characters, a bohemian treasure trove of independent shops, art galleries and boutique hotels, breathtaking scenery and fine cuisine. The area benefits from a unique microclimate, which in addition to an award- winning vineyard, fuels a diverse network of farmers and producers, picture-postcard palm trees and sub-tropical flora. July, when the town is in full bloom, is a prime time to visit.

Explore Penzance’s warren of cobbled streets on foot, stopping to peruse the eclectic shops. On Causewayhead you’ll find the longest continually running cinema in Britain, the Savoy, while on Alverton Street, the farmers’ market (Fridays only) rolls out an artisanal array. Inside Chapel Street’s characterful buildings, such as the Grade I-listed Egyptian House, you’ll discover vintage curiosities, furniture, local pottery and the like. Near the tail end, look out for the red-brick former home of Maria Branwell, mother to the Brontë sisters. The Victorian promenade, with its views across Mount’s Bay to the mighty St Michael’s Mount, provides picture-postcard vistas. Here also sprawls the town’s art deco Jubilee Pool. The UK’s largest seawater lido, it is bathwater-warm in July. For more coastal antics, Eastern Green and Long Rock beaches are walkably close. A magnet for artists, Penzance offers galleries galore to explore, from the 19th-century Newlyn School collective at Penlee House penleehouse.org.uk to Penzance Exchange’s newlynartgallery.co.uk contemporary exhibitions. On the edge of town is Polgoon Vineyard 01736 333946, polgoon.com which is open for tours and tastings. Sail Cornish waters on a boat run by Mermaid Pleasure Trips cornwallboattrips.co.uk or go to Penlee Park Open Air Theatre penleeparktheatre.com to see a play. Hop on the bus at nearby Greenmarket and visit the place poet Dylan Thomas described as ‘quite the prettiest village in England’, Mousehole.

The fish in Penzance – landed a mile down the road in Newlyn – is as good as you’d expect. It takes centre stage at The Shore 01736 362444, theshorerestaurant.uk where chef Bruce Rennie’s creations, such as mackerel with kimchi and peanut dressing, will delight. For cocktails and romance, try The Cornish Barn 01736 339414, thecornishbarn.co.uk where highlights include the whole roasted sea bass with smoked butter. MasterChef semi-finalist Lee Groves is at the helm in Penzance’s oldest pub, The Turks Head 01736 363093, turksheadpenzance.co.uk with its local beers on tap and traditional fare. Vegans flock to Archie Brown’s 01736 362828, archiebrowns.co.uk where slabs of quiche and homity pie come with a rainbow of delicious salads. Grab a coffee from The Tube, the converted 1970s Citroën HY parked at the tip of Bread Street, or settle in at Mr Billy’s 01736 367497, mrbillys.com for a clotted cream tea and pot of Tregothnan Earl Grey (grown nearby, in England’s only tea plantation). Finish the day with a visit to the Admiral Benbow 01736 363448, a colourful inn referenced in Treasure Island.

Explore the 3.5km section of the South West Coast Path, which runs from Penzance train station to Marazion.

Flybe provides daily flights from London Gatwick to Newquay, which is just under an hour’s drive from Penzance. flybe.com

National Express has a daily service from London Heathrow to Penzance (around 7.5 hours). nationalexpress.com

Love Penzance is the local tourist board and their website is packed full of ideas and handy information. lovepenzance.co.uk