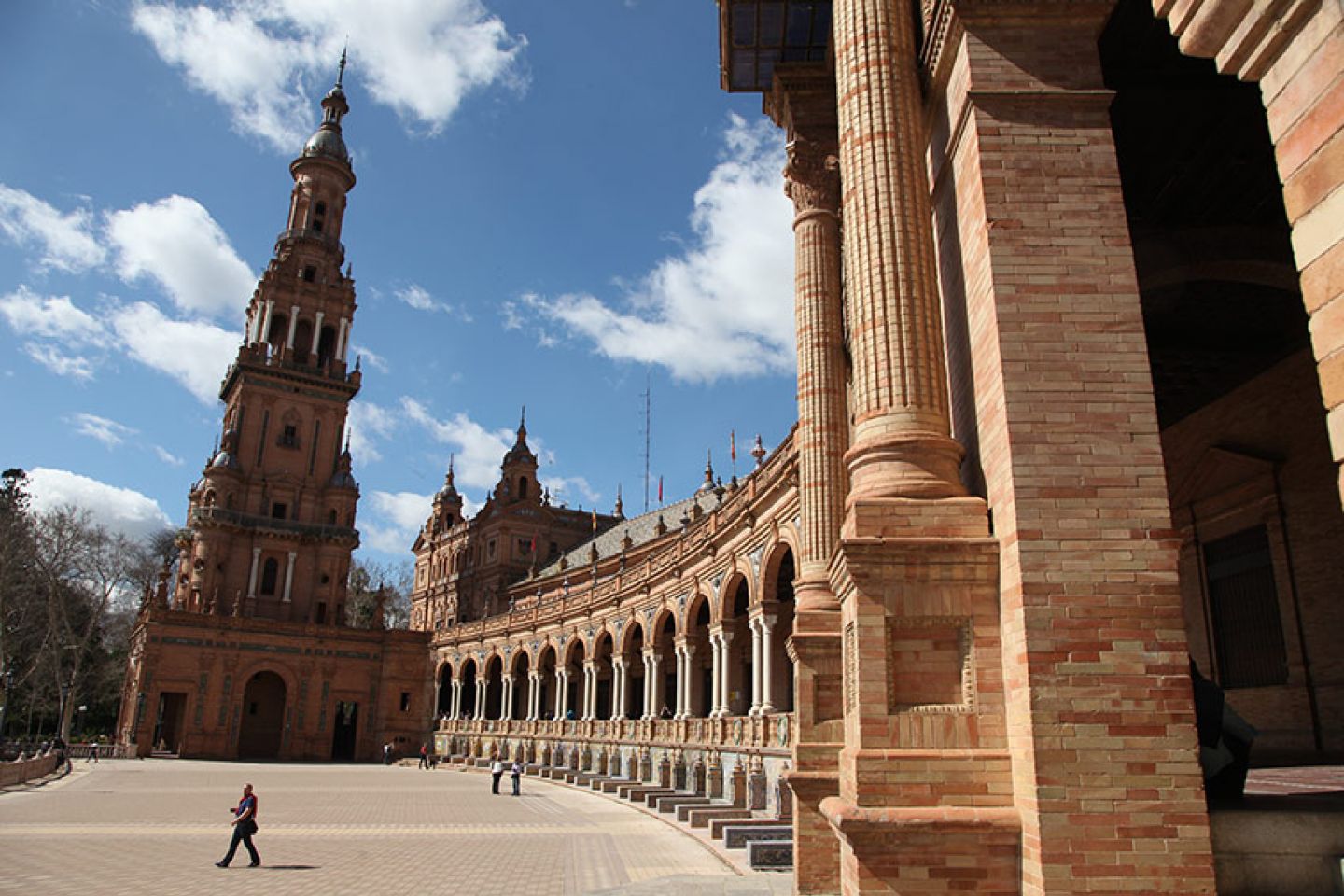 Fountain-filled courtyards, a rich history and some of the country’s best tapas are to be found in Andalucia’s sun-soaked capital, ‘the frying pan’ of Spain, says Renate Ruge.

To eat, drink, dance and make merry, as well as sample Seville’s famous bitter-sweet export: marmalade. Juicy oranges ripe for the picking hang from trees – 30,000 of them at the last count – all over this pretty southern Spanish city. It is also home to many a fiesta and religious festival as well as the flamboyant dance that is the fiery flamenco.

Start by entering the Alcázar palace gardens, where you will find a lush green space with an orange grove, palm trees and doves, and stately peacocks strutting around the fountains, patios and water features of the 16th-century Jardin de las Damas (Ladies’ Garden). Built in the 1300s, the Alcázar palace itself, alcazarsevilla.org, is one of Seville’s architectural high points, so much so that Unesco made both palace and gardens a World Heritage Site in 1987. The palace still stages royal weddings and is home to King Juan Carlos I when the monarch is in town. Its Moorish archways also play host to many TV and film sets, including Game of Thrones. In fact, the city abounds with green spaces. Take a siesta in the largest one, Parque de Maria Luisa; with its boulevards and duck ponds, it provides a pleasant escape from the noise of the city, curving around the grand Plaza de España. Built for the 1929 Exposición Iberoamericana, this plaza is gaudily grandiose, with tiled alcoves that feature maps and historic scenes of every Spanish province. You can hire a rowing boat to take a ride around its mini-canals for just a handful of euros. Next, head to Seville’s majestic cathedral, on the site of the great 12th-century Almohad mosque, with the original minaret, Giralda, towering beside it. As the sun sets, photo opportunities can be found at the city’s newest viewpoint, the Metropol Parasol, setasdesevilla.com, a frilly wooden structure towering over Plaza de la Encarnación. Since completion in 2011, it has been nicknamed Las Setas (‘Mushrooms’) by locals.

Find fine food, wine and shelter at the very reasonably priced Hotel Fontecruz Sevilla, 00 95 497 9009, fontecruz.com, a former palace in a fantastic location that makes a great base from which to get around the historic centre on foot. Rooms are stylish, with black-tiled bathrooms. For a palatial retreat, a silk-wallpapered room at Alfonso XIII, 00 34 95 4917000, starwoodhotels.com, is a grand option. Housed in a neo-Moorish mansion commissioned by its namesake king in the 1920s, the Alfonso has a lovely garden pool and art deco american Bar, former haunt of Ernest Hemingway and Eva Perón.

Walk along the cobbled streets and you’ll stumble across many unassuming tapas bars with huge hams hanging from the ceiling. Sip a glass of chilled sherry with slices of delicious jamón ibérico. Still going strong, Andalucia’s oldest, El Rinconcillo Bar, 00 34 95 422 3183, en.elrinconcillo.es, has been serving up small plates since 1670. Try cod in tangy tomato sauce, mackerel marinated in spiced oil and spinach with chickpeas. a must-visit is the fashionable Mercado Lonja del Barranco on Calle Arjona, mercadolonjadelbarranco.com, built as a 19th-century market but now housing a food hall with chandeliers and stalls serving prawns, oysters, chilli octopus and Padrón peppers. Grab a selection and find a shady spot for a snack under the umbrellas on the riverside. or enjoy a leisurely lunch at oriza Restaurant on Calle San fernando, 00 34 954 227 254, restauranteoriza.com, eaten alfresco on a leafy street. Try buttered baby squid, fried calamari with wakame alioli or bull’s tail with sweet and sour wine jus. Finish the day with sundowners at department store El Corte Ingles, elcorteingles.eu, which has an outdoor champagne bar offering views across the entire city.

Currency is the euro. Seville is one hour ahead of the UK. Flight time is about 2 hours 45 minutes from London. Cost to carbon offset for this flight is £2. 68, visit climatecare.org

Seville Tourist Board has useful itineraries for stays of up to five days or more, plus a guide to gastronomic highlights, cycle tours and the lowdown on flamenco hotspots. visitasevilla.es