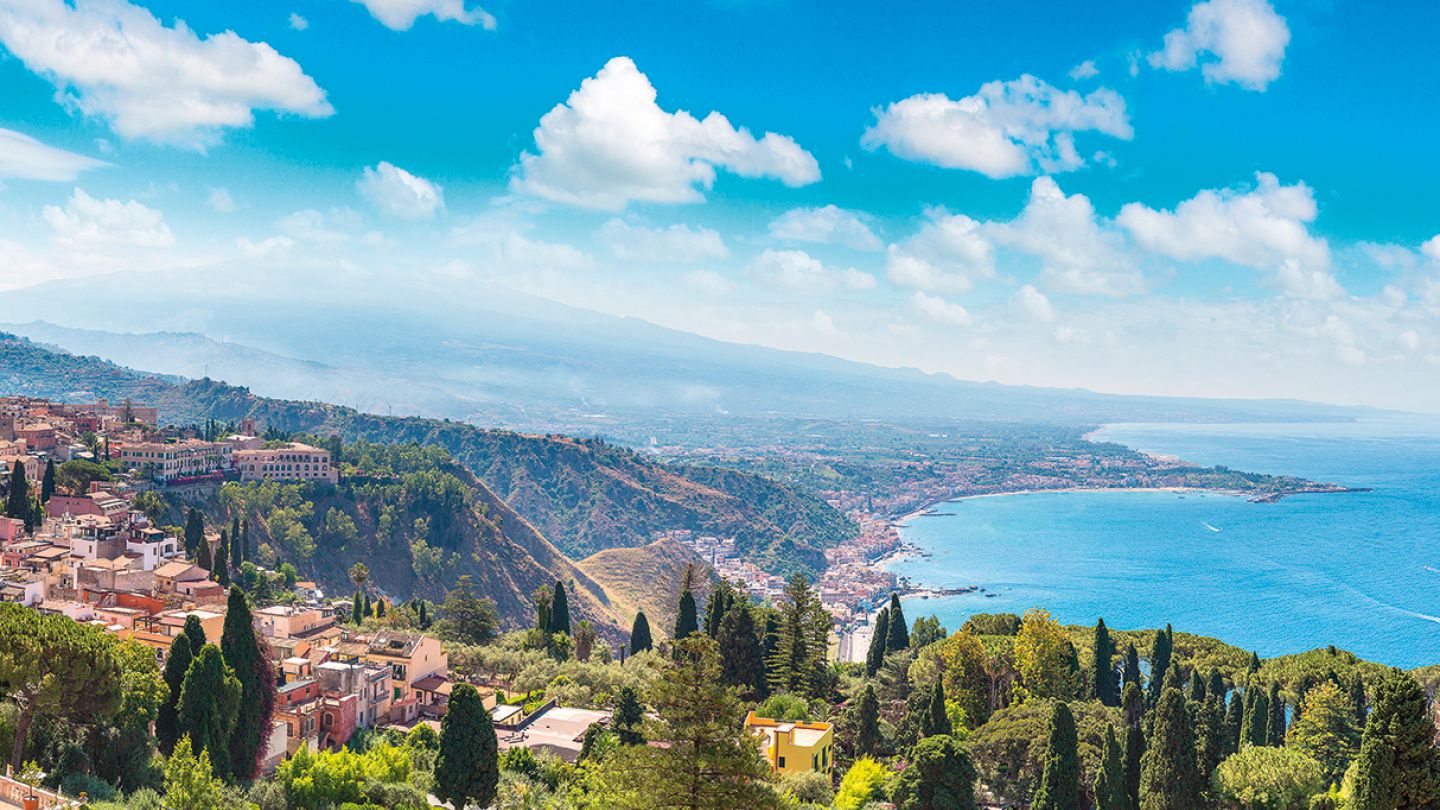 Make like Hollywood's golden age stars in this alluring Sicilian hilltop town, where April days are made for sunny strolls followed by pasta galore. Lucy Kehoe takes a tour

Teetering above the Ionian Sea on Sicily’s east coast, Taormina has hypnotised literary greats, glamorous screen sirens and aristocratic dynasties alike with its winding medieval streets, sun-baked terraces and elemental views of sea and earth. Enticed by the contrast between Mount Etna’s brooding form and Neptune’s waves, DH Lawrence, Sophia Loren and even Goethe have been drawn into the esoteric sun trap, seeking escapism and inspiration. In April, antics of the elite are superseded for a weekend by some spine-tingling Easter celebrations. Visit on Good Friday to see the candlelit streets thronged with black-veiled women guiding a pearly-white Mother Mary icon from church to church.

Start at the misnamed Greek Theatre, a crumbling Roman ruin once frequented by holidaying senators watching gladiatorial battles. Beyond the crumbling stage you’ll glimpse an 11th-century Saracen castle perched above the town on a stone hillock, a favourite site for 18th-century travellers completing their grand tours. Sunny April days make shady strolls in Villa Comunale park a joy. The tropical planting and whimsical structures were designed by scandalous Scottish noblewoman Florence Trevelyan – from the terrace, you’ll spot Mount Etna’s steamy breath rolling amid the azzurro skies. Obligatory sightseeing aside, a jaunt through the town’s hairpin twists and turns reveals tiled piazzas invaded by clambering bougainvillea, peach-toned houses and palm-planted balconies. Taormina’s isolated position means its nearby beaches are only accessible by cable car (£2.50pp one way). Hop on at Via Pirandello and descend for a dip – the best stretch is Isola Bella, a pebbled beach to the north of the peninsula. Soak up the sun and wait for the tide to lower before wandering across a thin isthmus towards the bay’s rocky islet, a nature reserve which gives the beach its name. Further north, sun beds and umbrellas for hire await on the sandy Mazzarò Beach.

There’s one rule when room hunting here: insist on a balcony. Once the day-trippers have left, sultry Sicilian dusks come alive with the chatter from local trattorias and the lapping of waves. At Villa Carlotta hotelvillacarlottataormina.com startling sunset views compete for attention with its eclectic interiors. Dolce & Gabbana-inspired floral prints clash boldly with sienna-red walls and a fondant-green dining room. Those with book-laden suitcases should head for the Belmond Grand Hotel Timeo belmond.com – once a regular pit stop for Tennessee Williams and DH Lawrence. Pen your opus from one of the mahogany writing desks, or sip a mojito – Hemingway’s favourite – on the Literary Terrace, admiring the panorama he claimed was so pretty ‘it hurt’. If golden age glitz doesn’t appeal, 18-room Hotel Villa Ducale villaducale.com provides uncomplicated luxury above Taormina’s tangerine rooftops.

In the Fifties, Ava Gardner was a regular barefoot dancer at rooftop La Giara lagiarataormina.it restaurant. A meal from the terrific seafood menu on the quiet candlelit terrace outshines the garish interiors within. In a town beloved by Elizabeth Taylor and Sophia Loren, it’s fitting that Taormina’s signature dish is suitably dramatic in name, sharing its moniker with an opera. You’ll find the aubergine and tomato-based spaghetti alla Norma on rustic wooden tables of inns across town, but Trattoria Tiramisu trattoriatiramisu.it serves one of the finest. Stars of a more culinary nature are found at the diminutive eight-cover Otto Geleng belmond.com where acclaimed chef Roberto Toro serves sumptuous plates of blue lobster and chickling vetch, shellfish crudo and blushing lamb with crimson grapefruit. Fans of The Godfather, filmed in the sleepy villages surrounding, should head to Bar Vitelli in Savoca for a taste of Sicily’s favourite dessert. Their lemon-zibibbo granita is, like revenge, best served cold.

Capture the taste of la dolce vita with a smooth gelato from Gelatomania. It’s the best in town. 7 Corso Umberto

Currency is the euro (EUR). Time is 1 hour ahead of GMT. Flight time from London to Catania International Airport is 3 hours, from where it’s 50 minutes by train to Taormina-Giardini station.

Visit Sicily is the island’s official tourist website. Check out the ‘discover’ section for ample inspiration on exploring Taormina and the surrounding east coast of Sicily. visitsicily.com