When eaten at their perfectly ripe moment it’s hard to beat these bulbous fruits – and the juicy flesh will be a match with savoury and sweet dishes alike, says Clarissa Hyman

When biting into a pear it can be like Russian roulette – you never know whether the provocative gold-green minx could be a mouthful of dry and woody fibre or grainy mush. With luck it is a luscious fruit with a subtle, fragile flavour at its fleeting moment of perfection.

The pear is a tree of great antiquity – a native of the Caucasus, it was spread by Aryan tribes as they migrated into north India and the Middle East. From there, it made its way through the temperate regions of Europe. The wild pear hardly blossoms at all, with the result that the fruits are few and tiny. However, once the Romans got to work diligently grafting and cross-pollinating, they produced – according to Pliny the Elder – more than 40 varieties of cultivated pear. These included Pirum libralium, which weighed about half a kilo and must have been a wow on patrician dinner tables.

The Romans ate pears both raw and cooked; some were made into perry and pear vinegar. Pears in jelly, pear preserves, pears cooked in wine or a syrup of vinegar and honey were all popular. The 16th century saw the popularity of the pear at its zenith in Europe, and included legendary varieties such as the Colmar, the Bergamotte, the Frangipane and the Cuisse-Madame (lady’s thigh). One famous old English cooking pear was the Warden, from which the popular dishes of baked Wardens and Warden pies were made. Raised by Cistercian monks and mentioned in the writings of Shakespeare, the Warden was for a time regarded as a fruit in its own right.

The pear is not an easy tree to grow. It is fussy and demanding, and harvesting is also harder to judge compared with apples. They must be harvested before ripe to allow a little time to soften after picking; if left too long on the tree they can turn woolly. On the other hand, if they have been picked too soon, when hard and green, they may never ripen properly. A long spell in cold storage will also neuter their fragrance, texture and flavour. Even those labelled as ‘ripe and ready to eat’ may still be a day or two away from perfect consumption.

The window of opportunity is short. Check for ripeness by pressing the stem end gently; chances are if the flesh yields the flesh will be rewardingly ready and should be eaten right away. If possible, buy organic because pears are sometimes treated with post-harvest preservative chemicals. Pyrus communis is the main species eaten in the West, and divides into several families by shape: round or flattened; top- shaped or top-heavy; conical and tapered; long and straight; or the voluptuous, classic pear-shaped with wide hips and narrow neck. They can also be classified by usage and cropping – earlies, lates, dessert, cooking, perry pears. The National Fruit Collection lists about 550 varieties of P. communis, though you would hardly know it from what’s on our supermarket shelves.

One of the most popular varieties is the golden-skinned Williams (US, Bartlett). Raised in Britain around 1796 from French Bon Chrétien, it is much used in preserving, distilling and canning. Conference are juicy and refreshing, with a long, narrow shape and yellow-green to brownish colour, and a delicious taste that belies their rather dull appearance. As autumn progresses, look out for Beurre Hardy, a lovely dessert pear that has buttery melt-in-the-mouth flesh; and the soft and sweetly perfumed Comice (though beware any ripe fruit as, alas, it does not travel well). The excellent Concorde is one of the last to ripen. A child of Conference and Comice, it is shaped like the nose of an aeroplane and has a very fine flavour and texture.

Asian pears, especially Pyrus pyrifolia (known as Asian/Nashi/Apple/Sand pear) and Pyrus ussuriensis (Chinese white pear, Snow pear) are further sub-divided into a myriad of cultivars and hybrids with both red-brown skin and pale green or yellow ones. Chinese pears used to have a higher proportion of grit cells, which gave them the name of sand pears. New varieties, however, are no longer so coarse and gritty. When it comes to flavour pairing, pears show a wide versatility: in Italy, pears and parmesan or Pecorino cheeses are frequently eaten for dessert; and pear, celery and walnut salad with blue cheese is a lovely starter or light lunch. Hugh Fearnley-Whittingstall sometimes startlingly uses them in fruity pizzas, substituting the cheese with smoked fish. Cooked pears are often enhanced with red wine, almonds, vanilla and chocolate or, as Darina Allen suggests, you can poach them in an exotic saffron and cardamom syrup.

Edward Bunyard wrote in The Anatomy of Dessert (1929) that while it is the duty of an apple to be crisp and crunchable, a pear should have such a texture as leads to silent consumption. I would suggest a solitary one as well. It is a moment of bliss that I, for one, am too greedy to share. 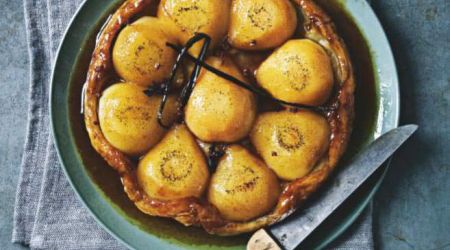 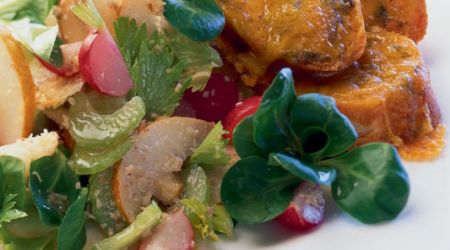 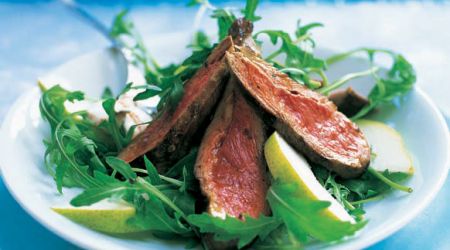 Lamb fillet with harissa, and rocket and pear salad 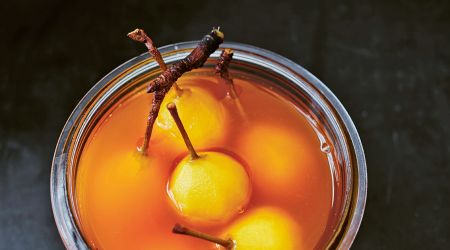 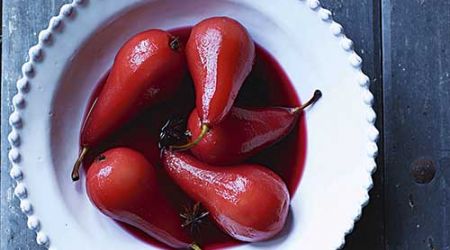 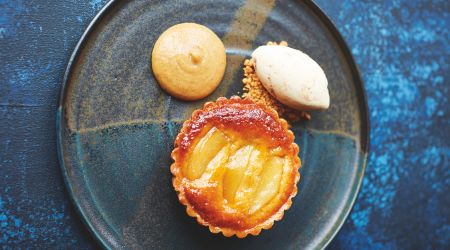 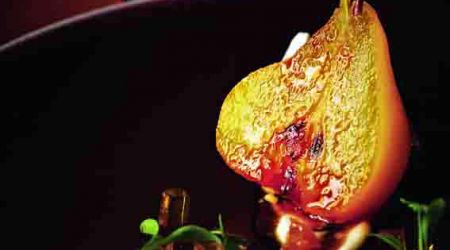 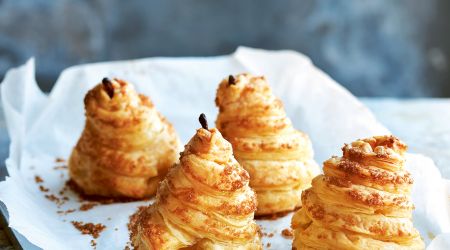 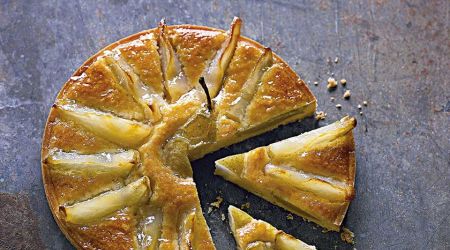 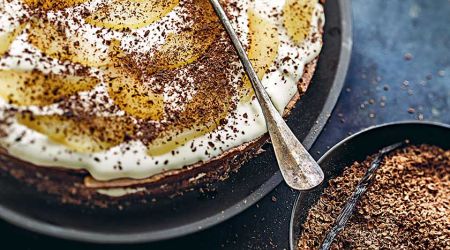 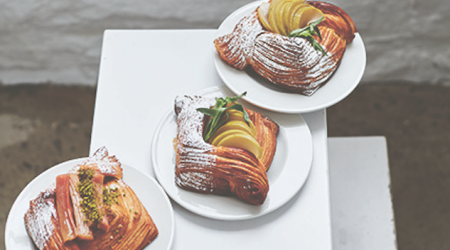 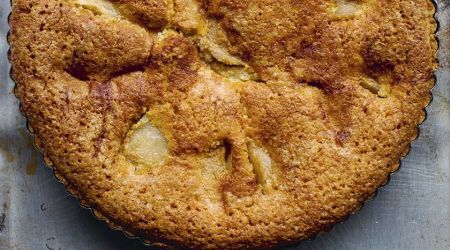 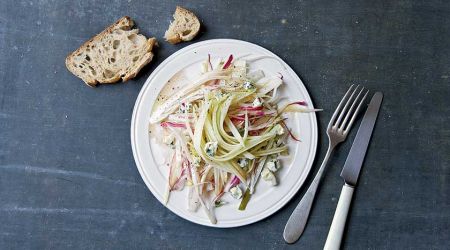 Chicory and pear with Roquefort 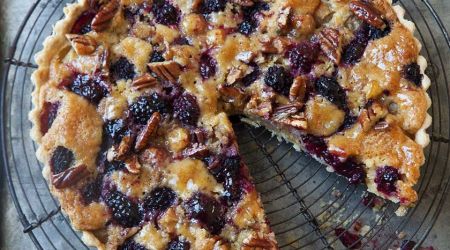 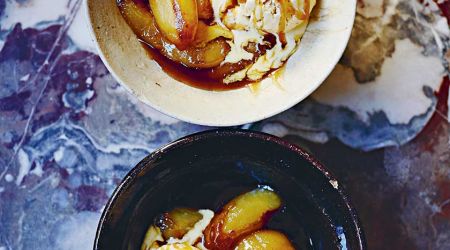 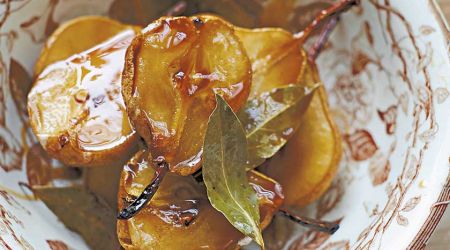 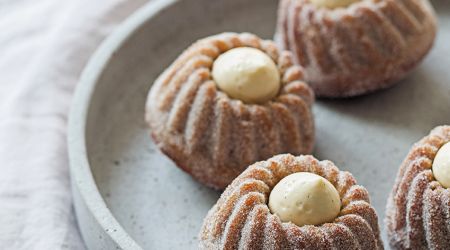 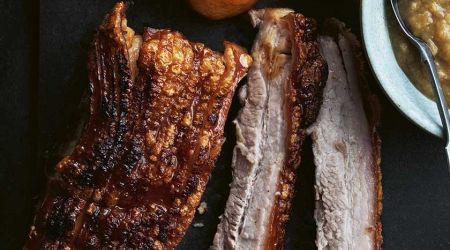 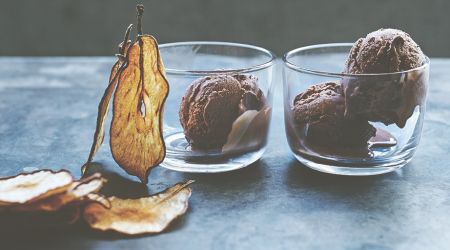 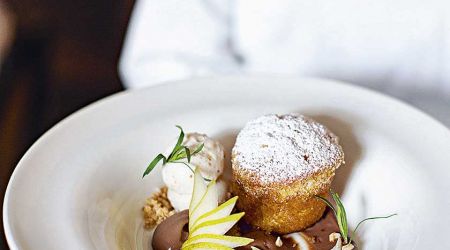 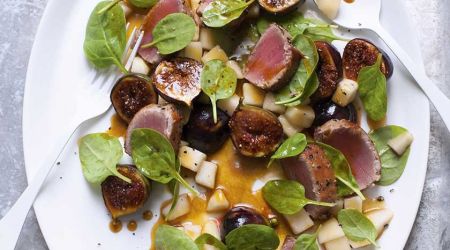 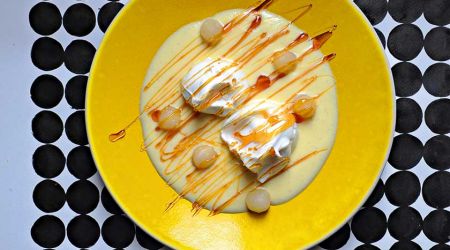